Home Politics Climate denial At COP27, US and Partners Announce More Funds for ‘Efficient’ Fertilizer as... 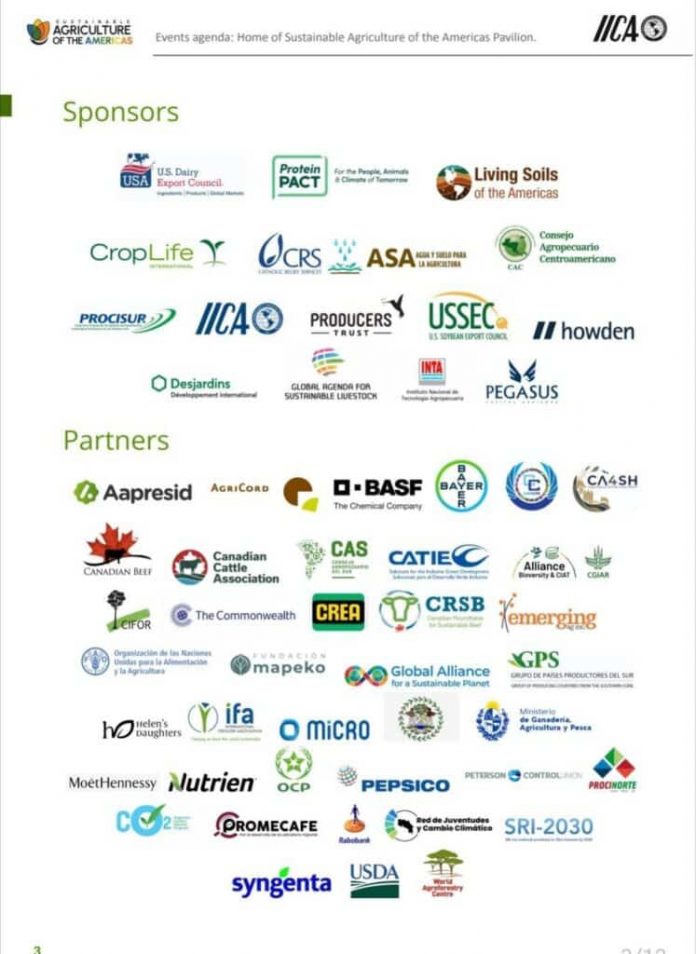 While the world’s top fertilizer producers report record profits and farmers worldwide face ongoing price spikes for chemical inputs, the agrochemical industry is touting innovation and increased efficiency as its solution to the economic and environmental impacts of its products.

It is a narrative that senior government officials, including those from the United States and the European Union, leaned into over the weekend at various agriculture-focused events at or on the sidelines of COP27, the annual United Nations climate negotiations, held this year in Sharm el-Sheikh, Egypt.

“We can increase productivity for small-scale farmers by using fertilizers in a smarter way,” Norway’s Minister of International Development Anne Beathe Tvinnereim said on a panel during that session hosted by the U.S. Center at COP27.

This climate summit has seen significant attention paid to issues around food and agriculture. A whole day was dedicated to the topic, it is included on the official agenda, and the summit features several food-and-ag-focused pavilions. As U.S. Special Presidential Envoy for Climate John Kerry noted during an event on “Adaptation and Agriculture Day” on November 12, “The future of our food systems is deeply entwined in the climate challenge.” Not only is climate change threatening food security worldwide; more than one-third of global emissions come from food and farming.

Synthetic nitrogen fertilizers, which are widely used in industrial agriculture, are a notable source of such emissions. These fertilizers are produced from fossil fuel feedstocks and have a significant climate impact, emitting greenhouse gasses at each stage of their life cycle. According to recent research, synthetic nitrogen fertilizers account for about 2 percent of global GHG emissions; reducing their use “offers large mitigation potential,” a peer-reviewed study published in August states.

But curtailing chemical fertilizer production and use was not on the agenda at COP27. Instead, panels populated by industry reps and U.S. and EU government officials focused on promoting more efficient fertilizers.

“Improving the efficiency of fertilizer is an industry talking point,” Ben Lilliston, director of rural strategies and climate change at the Institute for Agriculture and Trade Policy (IATP), told DeSmog. He said the push for more efficient fertilizers is partly based in fact, given the glaring problem with fertilizer overuse and nitrogen leaching that pollutes the environment. But initiatives that focus on fertilizer efficiency without addressing the larger problems inherent in industrialized food production miss the bigger picture, he explained. “From our perspective it’s not really addressing the core issue,” Lilliston said. “They’re still operating within the same farming system.”

Lilliston and others say that what’s needed instead is agroecology — the practice of applying ecological concepts and principles to the sustainable management of agricultural systems — and a transition to sustainable food systems, and that public and philanthropic support to prop up the fertilizer sector is misguided.

“Farmers are struggling yet the big fertiliser companies are making record profits. Governments need to stop using public funds to subsidise chemical fertilisers and support a shift towards agroecological farming practices that are better for farmers, consumers, and the planet,” David Calleb Otieno of the Kenya Peasants League said in a statement.

“The real test is whether we’re creating a system change in agriculture’s climate footprint,” said Shefali Sharma, director of IATP’s European office. “Are governments going to be promoting a vision that tinkers around the edges, or one that is transformative, creating food systems that are resilient and restoring ecosystems?”

Michael Fakhri, an independent UN expert or “Special Rapporteur” on the right to food, noted in a report to the UN General Assembly in July that the environmental degradation wrought by chemical fertilizers violates the right to a healthy and sustainable environment. He said the fundamental issue is not disruption in the accessibility of fertilizers, but rather “that so many farmers rely heavily on chemical fertilizers in the first place.” Lessening farmer dependency on these fertilizers must be the ultimate objective, he says.

Yet instead of scaling back subsidies for industrial agriculture and chemical fertilizers or introducing measures to discourage corporate profiteering or to promote alternative farming systems, the United States and other wealthy countries are doubling down on industry-driven narratives, input-intensive industrial agriculture, and promoting techno-fixes under the umbrella term “climate smart agriculture.”

Climate smart agriculture is among a series of buzzwords that GRAIN flags in an “agribusiness greenwashing glossary,” explaining that the term emerged to counter support for agroecology. According to GRAIN, “The world’s largest fertiliser companies propelled it into the mainstream with a massive lobby campaign and the creation of a global alliance of corporations, governments and multilateral agencies, such as the World Bank and FAO.”

That influence continues to grow in the broader agriculture sector, as evidenced by the slew of new partnerships and programs promoting the “climate-smart” concept. These include the Agriculture Innovation Mission for Climate (AIM4C) launched at COP26 last year and expanded this year, and a Partnership for Climate-Smart Commodities that USDA announced in February. These initiatives were on display during “Agriculture Day” at COP27 on Saturday, with dedicated sessions highlighting milestones and new investments. One of those new investments, announced by Vilsack, is the establishment of a public-private research partnership called the Efficient Fertilizer Consortium. USDA is putting $5 million towards it, while the Foundation for Food and Agriculture Research (which is coordinating the consortium) is seeking to raise matching funds.

The Efficient Fertilizer Consortium is part of the Global Fertilizer Challenge, which was launched by U.S. President Joe Biden in June as an effort to address food insecurity and agricultural emissions through investments in fertilizer efficiency and alternative fertilizers and cropping systems. In addition to the $5 million to establish the consortium, the United States is spending $20 million on an initiative called “Fertilize Right” to advance fertilizer efficiency worldwide, starting in Pakistan, Brazil, Colombia, and Vietnam. As of November 12, the Global Fertilizer Challenge, which will be implemented in partnership with AIM4C, has reached a total of $135 million in funding.

“I couldn’t be more thrilled by the Fertilizer Challenge that has been issued today,” US AID Administrator Samantha Power said during the Global Fertilizer Challenge COP27 session. She referenced working with the International Fertilizer Association (IFA) and with fertilizer firms like Yara. These agribusiness interests have had a notable presence at previous UN COP summits, and COP27 is no exception.

One of the panels during the U.S.-hosted session on the Global Fertilizer Challenge included the head representative for the global fertilizer industry, IFA Director-General Alzbeta Klein, who spoke about addressing the availability and affordability of fertilizers as well as their sustainability. She excluded any mention of the industry’s substantial profiteering.

A new report from the nongovernmental organizations IATP and GRAIN, found that nine of the largest fertilizer companies are expected to rake in $57 billion in profit this year, more than quadrupling their earnings from 2020. The report examined corporate filings for nine fertilizer producers: Nutrien, Yara, Mosaic, CF Industries, ICL Group, PhosAgro, OCI, K+S, and OCP. It also looked at fertilizer import costs this year for 18 G20 countries and nine low- and middle-income countries, finding that these governments were paying double or triple what they paid in 2020 for fertilizer this year.

Several factors contributed to surging fertilizer prices, including supply chain disruptions and soaring fossil gas prices worsened by Russia’s ongoing war in Ukraine. Another factor, however, is the market power enjoyed by a handful of large fertilizer producers: The top 10 companies account for almost 40 percent of fertilizer sales, and in the United States just four firms control 75 percent of domestic nitrogen fertilizer production.

At a time when climate experts are calling for urgent transformations of all systems in society, including the food system, some environmental advocates are questioning the approach of enhancing fertilizer efficiency while maintaining the chemical-dependent model of industrialized agriculture. For instance, Alliance for Food Sovereignty in Africa (AFSA), a large, grassroots, civil society movement advocating for food sovereignty and ecologically-based farming in Africa, is pushing back against the input-intensive “green revolution” agricultural model that outside interests are exporting to Africa.

“Today, the majority of the solutions put forth and funded by governments and donors to address these problems are, in the long run, making things worse,” Bridget Mugambe, AFSA’s program coordinator, said in a statement on the group’s website. “Industrial agricultural methods, dubbed ‘Climate Smart Agriculture,’ promote the use of excessive chemical inputs on plants and in the soil. Carbon credit programs are being developed to legitimize pollution and to uproot communities from their land. These are just a few examples of the false solutions brought by the rich and the powerful.”

The post At COP27, US and Partners Announce More Funds for ‘Efficient’ Fertilizer as Industry Reports Massive Profits appeared first on DeSmog.