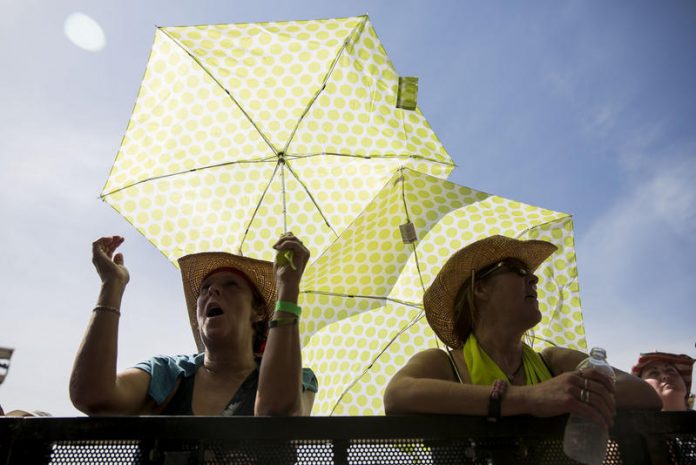 People love to wax nostalgic about the Austin of decades past. The rents were cheaper, the traffic was lighter, the music was live-r. Some of that talk may be history viewed through rose-colored glasses, but there is at least one metric by which Austin was, literally, cooler: the temperature.

“When I was in high school, I didn’t have AC in my car, and now I couldn’t even think of not having AC,” says Carmen Young, who grew up in Austin in the ’80s and ’90s.

Don’t get her wrong. Young says it was always hot in the summer – it is Texas after all – but just not this hot.

“I don’t remember it being over 100 during the beginning of the summer on consecutive days,” she says.

The data back her up.

“We have definitely seen the curve come up here, and it’s only trended up,” says Burton Fitzsimmons, chief meteorologist at Spectrum News in Austin.

Fitzsimmons says record keeping of temperatures started in the late 1800s. If you look at all those years, Austin averages just 12 triple-digit days a year. That was also around the average when Young was a kid.

“No matter how you slice or dice it, the city of Austin has definitely been warmer,” says Victor Murphy with the National Weather Service.

“You know, Austin right now is pretty much a microcosm of the globe as a whole.”

Putting aside triple-digit days for a second, the average temperature is also rising.

“In fact, so far this year, year-to-date average temperature for the city of Austin is running at about 1.01 degree Fahrenheit warmer than the previous warmest year on record,” Murphy says. “Which is a lot.”

There are a lot of things that increase the temperature of a city. More asphalt and concrete keep heat in. Weather trends bring years of cooling rain or warming drought. But, when it comes to long-term warming, Murphy and Fitzsimmons both say, climate change clearly plays a role.

“You know, Austin right now is pretty much a microcosm of the globe as a whole. What we’re seeing month after month, year after year of record warm temperatures,” Murphy says.

In keeping with that trend, Fitzsimmons says this year is on track to be “the hottest year ever in Austin history.”

And looking at the forecast for this week, Young says that’s not hard to believe. She’s raising her own kid in Austin now and wonders if, for her daughter, this weather will just seem normal.