The latest climate change survey from Yale and George Mason Universities is out, and it shows that Americans are still poorly-informed about the causes of global warming. Only 54% understand that it’s mostly human-caused, while 33% incorrectly believe global warming is due mainly to natural factors.

In fact, a new study published in Nature Scientific Reports developed a real-time global warming index. It shows that humans are responsible for 1°C global surface warming over the past 150 years – approximately 100% of the warming we’ve observed. Lead author Karsten Haustein explained their new index and study in a blog post. 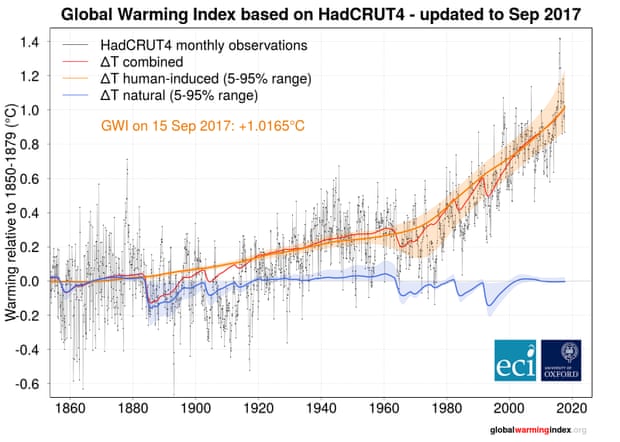 Americans are nevertheless growing increasingly concerned about climate change. A record 22% are very worried about it (double the number in the March 2015 survey), and 63% of Americans are at least somewhat worried about climate change. That’s probably because they perceive direct climate impacts – 64% of survey participants think that global warming is affecting the weather, and 33% said it’s having a big influence.

Americans also connecting the dots to specific extreme weather events. About 54% said that climate change worsened the extreme heat waves, wildfires, and hurricanes that pummeled the country in 2017. 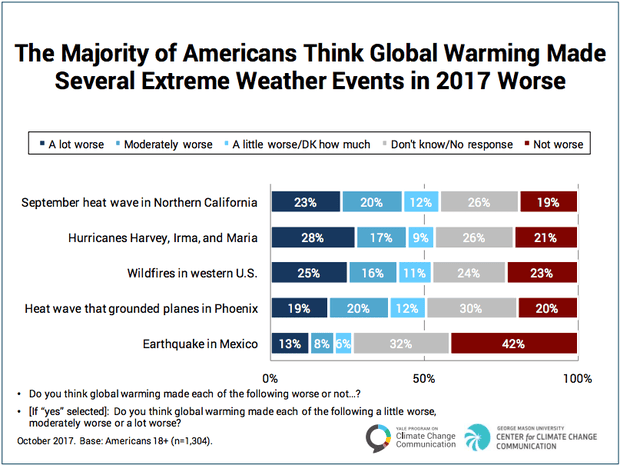 Overall, 42% of those surveyed believe that Americans are being harmed by global warming right now – an increase of 10% from the response in March 2015, and a record high in the survey that began in 2008. That increase is likely due to the beating America took from extreme heat waves, droughts, wildfires, hurricanes, and floods in 2017. It’s difficult to deny global warming when its effects are punching us in the face.

At the same time, only 15% of Americans realize that the expert consensus on human-caused global warming is over 90%. That’s an important result because the expert consensus is a ‘gateway belief.’ Research has shown that support for climate policy is linked to perceptions about scientific agreement on climate change.

Americans are pessimistic about the future climate

The survey also found that Americans are very pessimistic about the odds that we’ll successfully tackle the threats posed by global warming. While 78% realize that humans could potentially slow global warming, only 5% of Americans believe we’ll be successful in doing so. A quarter of those surveyed think that we’ll fail because people are unwilling to change their behavior, and 48% said it’s unclear at this point whether we’ll take the necessary action. 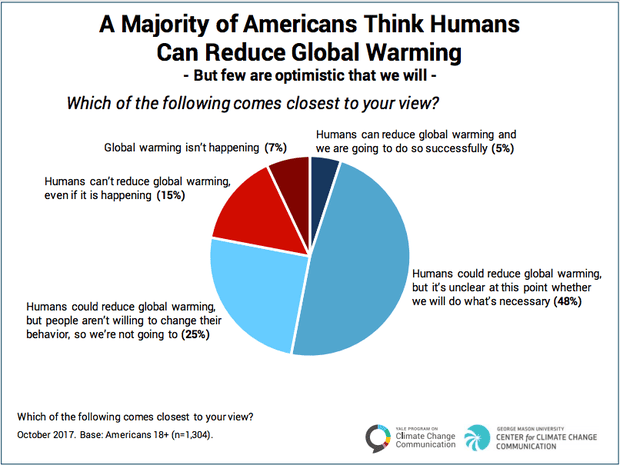 Given the current state of affairs in the Trump administration, that pessimism is certainly justified. However, there are still reasons for hope, especially since the climate-denying Republican Party is beginning to lose its grip on power.