Home News Can animals and plants adapt to global warming?

This post is an updated intermediate rebuttal to the myth “animals can adapt to global warming“. It was written by Finley Hay-Chapman as part of the George Mason University class Understanding and Responding to Climate Misinformation, combining climate science and communication best practices to debunk common climate myths.

The only one of the Big Five mass extinctions where this did not occur is the most recent Paleocene Thermal Extinction, that wiped out the dinosaurs 65 million years ago. This was kicked off by a large meteor strike (a different, more jarring change in climate). Most extinctions have been linked to immense volcanic events, called Large Igneous Province (LIP) eruptions. These events spew billions of metric tonnes of carbon dioxide (CO2) and sulfur dioxide (SO2) into the atmosphere, in many cases triggering marine anoxia (oxygen loss) and ocean acidification due to rapid greenhouse warming. 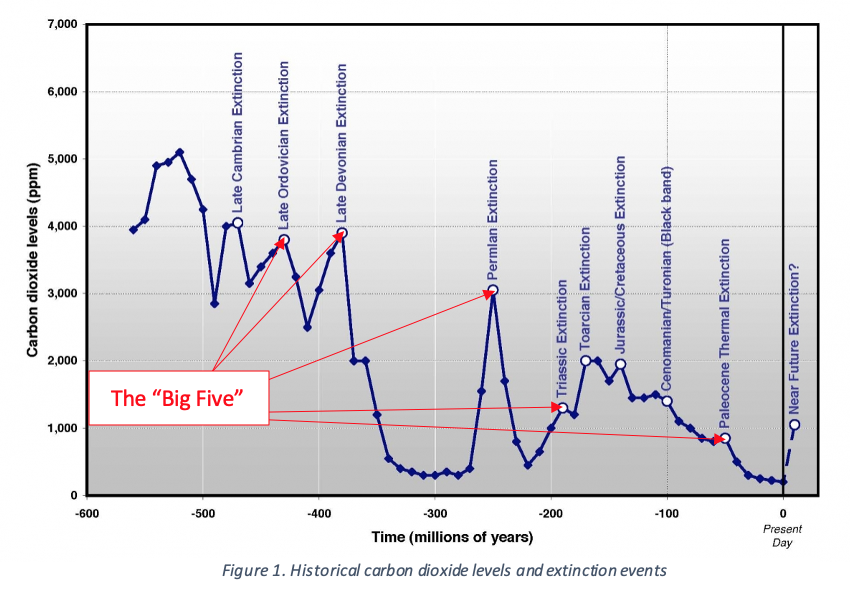 The largest of the mass extinctions, the Permian Extinction (also known as the “Great Dying”), resulted in the loss of nearly 96% of all marine species and 70% of all terrestrial species at the end of the Permian Era 251 million years ago. During this event, which was triggered by an LIP eruption in modern-day Siberia, global temperatures warmed by nearly 10 °C and the world’s oceans lost up to 80% of their oxygen content. This eruption, which lasted over a period of approximately 900,000 ± 800,000 years, is estimated to have released as much as 170,000 gigatonnes (Gt) of CO2 into the atmosphere. Using these estimated values, one can compute that CO2 was released at an average rate of about 0.1 to 1.7 Gt/year during the event. This is much less than the rate at which humans are emitting CO2 today. For example, we released 33 Gt CO2 in the year 2019 alone, and current projections show that global emissions are only going to increase in the near future.

One myth argues that this change is fine, because animals and plants have adapted to shifts in CO2 concentration or temperature of similar magnitude. For example, Earth has had periods in the past where CO2 concentrations reached levels of 1-2 thousand parts per million, much higher than today. Also, the global average temperature difference between ice ages and the warm interglacial periods between them is thought to be nearly 4-7 °C. These natural changes may seem drastic, however, the rates of global mean change associated with them are not comparable to the changes we are experiencing today or at the onset of each mass extinction event.

Most large, natural shifts in CO2 concentration have occurred over tens to hundreds of thousands of years (Figure 2). For example, the periods between ice ages and warm periods occur over about 10,000 years, with a warming rate of about 0.005 °C/decade. Comparatively, state-of-the-art climate models predict that global mean temperatures will warm by 2-6 °C in the next 100 years due to anthropogenic climate change. This current rate of warming would be 20-60 times faster than the natural warming rate after ice ages. Today’s shifts in CO2 concentration and global mean temperature due to human emissions are occurring too fast for plants and animals to be able to adapt. 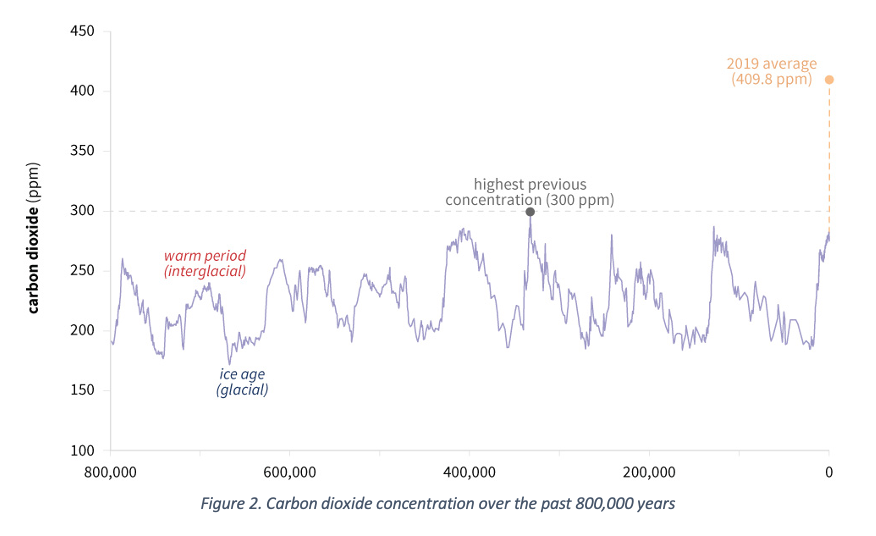 Future climate change aside, the natural world has already been under attack for centuries. Since the discovery of agriculture, humans have massively transformed the globe through the expansion of modern civilization, to the detriment of Earth’s biodiversity. More recently, this transformation was kicked into high gear with the Industrial Revolution of the late 1800s. Great swathes of temperate forest in Europe, Asia and North America have been cleared over the past few centuries for agriculture, timber, and urban development. Tropical forests in South America and Africa are now on the front line. Human-assisted species invasions of pests, competitors, and predators are rising exponentially, and overexploitation of fisheries and forest animals for meat have already driven many species to the point of collapse.

The ways plants and animals adapt to changes in their environment have also been severely hampered. In order for many species to migrate large distances – one of the main ways animals adapt to climatic shifts – they would have to cross large areas of human influence. Mass migration in areas of large human population – entwined with crisscrossing, high-speed highways and polluted, dammed-up rivers – is a challenging task. Along with this, it has been shown that climate change has already had an impact on the environmental cues that animals use to determine the timing and navigation of their migratory patterns. Subsequently, these changes in animal migratory behavior have also been shown to have a detrimental effect on the an animal’s average lifespan and overall health.

There is much evidence that we are already on the brink of a sixth mass extinction event. Because of human activity, the number of species on the planet is already decreasing. According to the Millennium Ecosystem Assessment (an international environmental report with the goal of assessing the impact of ecosystem change on human well-being), 60% of the world’s ecosystems are now degraded and the global rate of extinction is already at 100 to 1000 times that of the “normal” background rate on geological timescales. Because mass extinction events take place over a long time period compared to human life spans, this evidence alone is not enough to definitely conclude the occurrence of such an event. However, we can say with certainty that rapid, anthropogenic climate change will only make things worse for Earth’s biodiversity.

If we fail to prevent catastrophic climate change, there will be many regions of the world (some of which are highly populated) which will become uninhabitable to even us humans. This is based on human physiology and future temperature and humidity predictions under climate change. When temperature and humidity levels are too high – indicated by something scientists call a high “wet bulb temperature” – the human body is not able to cool itself by sweating. Extended periods of these high wet bulb temperatures increase the rate of heat stroke and death in humans. Here in the U.S., large areas of the Mississippi Valley, the South, and Arizona could have almost a month’s worth or more of these dangerously hot and humid days by the year 2050 (Figure 3). When we zoom out to the entire globe, it gets worse, specifically in tropical regions. Right now, only 1% of the Earth’s land is considered a “barely livable” hot zone, mainly within the Sahara and other deserted regions. If emissions continue unregulated and climate change continues unmitigated, this fraction could increase to 19% by 2070. Billions of people live in these potential, future hot zones. Due to the current state of the global economy, many disadvantaged people residing in these potentially deadly places may not be able to move away or adapt. 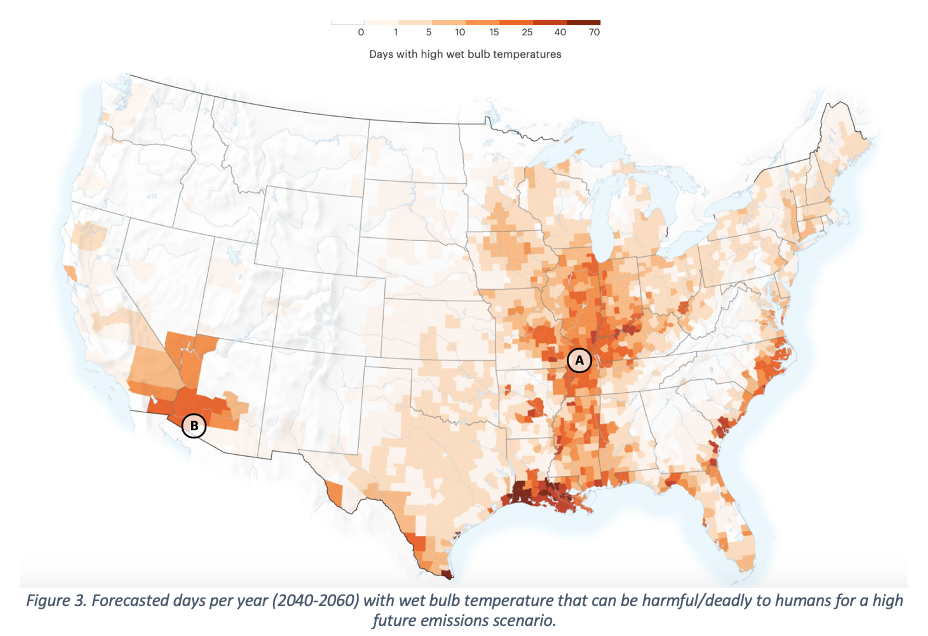 In summary, the current outlook on Earth’s biodiversity is gloomy. We know that most mass extinctions in the fossil record have been triggered by the rapid onset of global warming due to an increase in carbon dioxide emissions to the atmosphere. In the past, these emissions were usually due to large, volcanic episodes which occurred over tens to hundreds of thousands of years. On a geological timescale, these changes occurred in the blink of an eye, and this is why they were so costly. The human-caused climate change that is occurring today is similar; since 1850, we have increased atmospheric CO2 levels to the highest they have been in the last 3 to 5 million years. Humans are changing the Earth’s climate faster than animals and plants are able to adapt, and a multitude of evidence points to the occurrence of a sixth mass extinction. Even though this may be depressing, there is still hope. There is still time to reverse the worst effects of man-made climate change, and to do so we must support conservationist efforts and transition to renewable energy. For all of human history we have depended on Earth’s biodiversity, and it now depends on us to save it.