Home Science Energy Clean Power Plan is doomed. What about its sister rule? 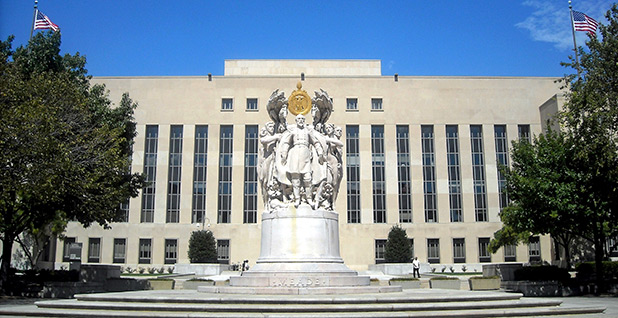 This federal court has stalled litigation over more than one Obama-era climate rule. AgnosticPreachersKid/Wikipedia

U.S. EPA has announced with great fanfare that it plans to kill the Clean Power Plan, but another major climate rule for power plants is still on the books.

In contrast to the Clean Power Plan — which remains on hold after the Supreme Court blocked it — the new source rule is currently the law of the land. EPA is reviewing it as part of President Trump’s “energy independence” executive order. A federal court case challenging the rule has been indefinitely stalled in the meantime.

An EPA spokesman stated that a team at the agency is “looking into the program and opportunities for reform” but did not offer a timeline for when that might happen. Currently, litigation over the new source rule is in indefinite abeyance, though EPA will have to provide progress reports every 90 days.

“This will be fun to watch how EPA dances around this question of what you are going to do with this new source rule,” said Pat Parenteau, a professor at the Vermont Law School.

Some Clean Power Plan supporters are also worried about the fate of the new source rule.

“It doesn’t appear that [EPA Administrator Scott] Pruitt has seen a significant clean air regulation that he likes, and massive rollbacks are what’s there to do,” said environmental attorney Sean Donahue. “I’m concerned they will go after the new source rule, as well.”

But others think the rule is on firmer footing.

And some suggested that attacking that rule simply won’t be a priority for Pruitt, given the dearth of plans for new power plants in the United States.

“Nobody today is interested in building new coal plants anyway. There is very little industry pressure. The idea that Trump and Pruitt are going to somehow turn around the fortunes of the coal sector just runs contrary to the market,” said Ben Longstreth, senior attorney for the Natural Resources Defense Council’s Climate and Clean Air program.

When Pruitt signed formal plans yesterday to ax the Clean Power Plan, he did not announce whether he plans to replace the rule. “We can now assess whether further regulatory action is warranted; and, if so, what is the most appropriate path forward, consistent with the Clean Air Act and principles of cooperative federalism,” Pruitt said in a statement.

Many observers expect his agency to adopt a more limited approach to emissions control. And some say the new source rule could even offer a template for doing that.

The Obama-era rule for new sources represents an “inside the fence line” approach to emissions control — something some trade associations have touted as a more appropriate and manageable way to control carbon emissions for existing power plants.

“It fully conforms to their [best standard of emissions reductions] that they have been stipulating,” said Donahue, referring to the Trump team’s assertions that the agency’s authority is limited to specific plants.

Under the 2015 rule setting emissions rate reduction targets for new and modified power plants, individual plants could reach rate reduction targets by implementing various technological fixes. For coal plants, EPA had recommended the use of partial carbon capture and storage, a controversial technology. If the plants chose to use CCS technology, they would not have to capture 100 percent of emissions but would have to trap enough carbon to just about match the emissions rate reduction of switching to using natural gas, Longstreth said. Natural gas-fired power plants would have more modest requirements.

Whether CCS technology would be a part of the mix of any new rule EPA may develop for power plant emissions is unclear.

“It would be interesting, to say the least, if CCS retrofits would be the standard,” said Andres Restrepo, a staff attorney with the Sierra Club. He noted that the same emissions reductions could be achieved more cheaply through the approaches taken by the Clean Power Plan.

“I would really be surprised if Pruitt and company looked at CCS for the ‘inside the fence line’ rule. That’s not to say that couldn’t be a method for an existing source rule,” he said.