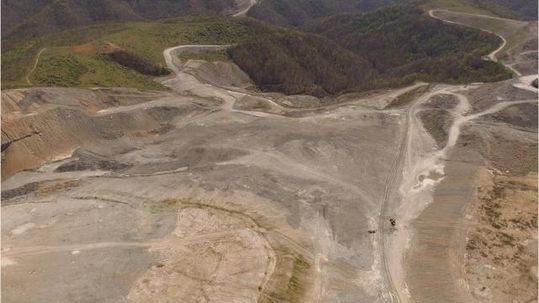 An eastern Kentucky coal mining company on Tuesday announced its plans to build what could become the state’s largest solar farm on a reclaimed mountaintop strip mine, promising jobs for displaced coal miners and energy production. Wochit

An Eastern Kentucky coal mining company plans to build what could become the state’s largest solar farm on a reclaimed mountaintop strip mine, promising jobs for displaced coal miners.

The Berkeley Energy Group and EDF Renewable Energy are exploring what they’re billing as the first large-scale solar project in Appalachia. They’re focused on two mountaintop-removal mining sites outside Pikeville, where engineering and feasibility studies are underway for a 50- to 100-megawatt project.

By comparison, that could be five to 10 times are big as LG&E and KU Energy’s 10-megawatt solar farm at its Brown station in Mercer County. That Central Kentucky array has 45,000 solar panels on 50 acres that company officials have said can provide energy for about 1,500 homes. The Kentucky Public Service Commission last year also approved an 8.5-megawatt solar farm for East Kentucky Power in Winchester.

“I grew up with coal,” said Ryan Johns, an executive with Berkeley, an Eastern Kentucky coal company. “Our company has been in the coal business for 30 years. We are not looking at this as trying to replace coal, but we have already extracted the coal from this area.” He said it’s just an extension of using that land to produce energy for the nation while putting out of work coal miners back to work.

He said it’s too soon to say how many jobs the solar project might support, but solar power jobs have been expanding quickly across the country. He said EDF has found there will be plenty of sun to generate electricity in the area.

Johns and former Kentucky Auditor Adam Edelen came up with the idea and are working on it together.

Edelen created Edelen Strategic Ventures after leaving office and said the two men have been friends since they went to college at the University of Kentucky 20 years ago. Edelen said they’ve had no trouble generating interest in the project because of its powerful narrative of employing displaced coal miners on mined-over land and creating a partnership between a coal company and another that’s focused on renewable energy.

Eastern Kentucky has been hit especially hard by changes in the nation’s energy industry. Cheaper, clean-burning natural gas has replaced coal at many power plants across the nation, and Eastern Kentucky’s coal supplies have been dwindling and have been getting more expensive to mine. Automation in the industry has also eroded its job base, and environmental regulations were tightening.

Eastern Kentucky coal extraction fell from about 23 million tons in 2008 to about 5 million tons last year. Over that same time, mining employment dropped from 14,373 to 3,833 last year.

You may like:Kentucky Coal Museum shifts to solar power

There are still hurdles to cross, but Edelen said they decided to go public when news of it began to leak out and various filings were made with government agencies. He said they are especially pleased to partner with EDF, which has more than 30 years of experience in wind, solar, bioenergy and storage and has developed 9,000 megawatts of renewable energy.

“A project of this magnitude has never been proposed in Appalachia,” said Doug Copeland, EDF development manager. “Doing so will require every bit of innovation, experience, and skill we’ve developed,” he said. “Everyone in our company, from our executive team to our site engineers, is committed to doing all we can to generate jobs and income to this region.”

Edelen said the project would tie into an electricity grid that serves Eastern states, potentially serving companies looking for more renewable energy. Unlike Kentucky, some states have mandates or goals to make sure a certain portion of their electricity comes from renewable sources like solar or wind.

Reach reporter James Bruggers at 502-582-4645 and at jbruggers@courier-journal.com.