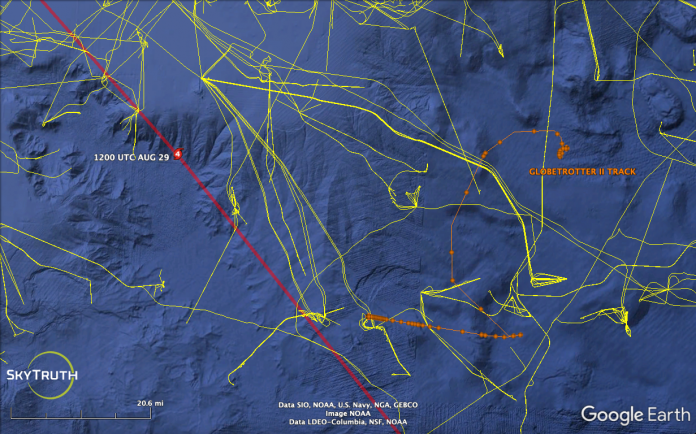 Over 100 crew members aboard an ultra-deepwater drill ship were left to ride out Hurricane Ida in the Gulf of Mexico — and local news reports indicate that the crew remains aboard the damaged ship. The Coast Guard has dispatched a cutter to determine the extent of any damage to the drillship and to assess the crew’s safety. Four injured crew members have reportedly been evacuated.

On Wednesday, the Coast Guard issued a statement on the drill ship’s current status. “The master of the vessel has told the Coast Guard that the vessel is not in distress but information released reportedly from the crew of the Globetrotter II indicates potential issues with safety,” Petty Officer Third Class Gabriel Wisdom said in a statement read to DeSmog, adding that a Coast Guard cutter, the Venturous, was en route to the drill ship “to better determine whether the crew is in any immediate danger and whether the crew should be removed from the vessel.”

It’s not yet clear how extensive the damage to the ship was.

“It may have sustained damaged,” Officer Wisdom told DeSmog. “Personnel may have been injured.”

The Noble Globetrotter II began taking on water after riding out Ida, according to KLFY, a Louisiana CBS News affiliate, which ran images of lockers and gym equipment apparently tossed around in Ida.

One crew member aboard described harrowing conditions during the hurricane in an anonymous interview with the CBS affiliate, alleging that the ship nearly capsized. “I mean I was watching grown men with life jackets hold on for dear life crying in the hallway,” one anonymous crew member told KLFY. “It was bad.”

“Another crew member told News 10 that he believes people were left on board the vessel and left in harm’s way for no other reason than the expense of removing them and bringing them back once operations were ready to continue,” KLFY reported. “He added that they are still on the ship waiting for anyone to come and bring them home.”

A video posted to social media by Storm Chasers Live appears to show water rushing in from behind a watertight door and a ship’s riser at an unusual angle. “About 100 guys are stuck in the Gulf on Noble’s Globetrotter II drillship contracted through Shell with a breach in the hull after they weren’t evacuated before Hurricane Ida,” the post states.

A representative for Noble Corp. did not immediately respond to questions from DeSmog about the Globetrotter II.

On Sunday night, after Ida made landfall in Louisiana as a Category 4 hurricane, Noble Corp. had announced that all personnel aboard its three ultra-deepwater drillships in the Gulf of Mexico were safe and accounted for after the storm.

“Each rig successfully secured its respective well in progress and took evasive actions to avoid the storm’s path. Of the three, the Noble Globetrotter II is the only vessel that encountered hurricane-force conditions,” a company press release indicated. “The vessel maintained stability throughout the weather event and is operating on its own power with functional marine and safety systems. A full assessment of its condition will be completed as soon as the weather clears.”

It’s not yet clear how much damage the drill ship may have suffered during the storm. Rumors circulated on social media that the ship’s Lower Marine Riser Package (LMRP) may have been damaged or lost overboard.

If that were the case, the Globetrotter’s path took it over numerous underwater pipelines, an analysis by SkyTruth shows, raising the possibility that subsea infrastructure could have been damaged as well.

It’s also not yet clear what information was reported to federal authorities about the drill ship’s condition immediately after Ida.

On Sunday, August 29, DeSmog reached out to the U.S. Coast Guard to inquire about the condition of the Noble Globetrotter II. A press officer responded that all the only thing the Coast Guard had only confirmed about the ship was: “Not in peril, Under its own (intermittent) power, No major injuries, no medevac requested.”

On Sunday, a spokesman for the Bureau of Safety and Environmental Enforcement (BSEE), which regulates the offshore drilling industry, verbally confirmed to DeSmog that the Noble Globetrotter II had suffered “some damage.” Later that day, Sandy Day, a BSEE press secretary, walked back that confirmation, writing that the agency had received no reports associated with the ship.

The following day, in response to additional inquiries from DeSmog about the ship’s condition, Day wrote: “We have received no more information than what Noble Energy has already reported.  Per Noble, ‘A full assessment of its condition will be completed as soon as the weather clears.’ Thanks for following up.”

This is a developing story. Updates forthcoming.