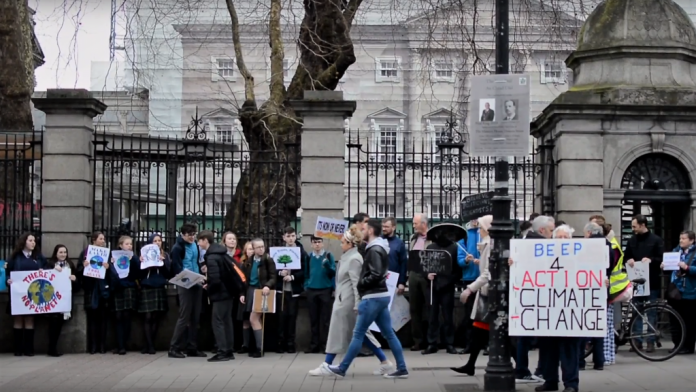 TO: Parents of Planet Earth

Over the past few weeks we have witnessed an unprecedented rising of our children across the world. They have skipped school on Fridays to protest about climate change, following the example of a Swedish teenager, Greta Thunberg.

Their example has drawn both praise – especially from scientists – and criticism. For many people their action may seem quite bewildering. Why are they taking such extreme action? Are they being unduly politically influenced? Should we be concerned?

I shared many of these questions until a few years ago I had a rude awakening to the urgency of climate change and what it means for our children. Like these children on the streets, I became anguished by the silence and the fear to face this mammoth challenge facing us all.

Like these children, I have studied the science. Based on that scientific evidence the message was clear: we are out of time. Not “nearly” out of time – but actually out of time.

Our planet is already warming fast and the next generation will be in serious trouble. Unless we take radical action and change our ways, we risk bequeathing them an unlivable planet. Surely none of us want that?

This realization, which shook me to my very foundations, led me to give up my full-time job and to focus on waking people up to this stark reality. I wrote a book about my experiences,Climate Generation, with a wish that others could understand what the scientists are telling us.

I wanted to share my story with other parents – not as some kind of guilt trip, but as a sincere plea to wake up and take our kids future seriously. I shared my concerns on the Ryan Tubridy Show.

“We realise that we need each other. That we are all the climate generation now…”

I also started to look around and see where I could raise my voice for change.  Last December a friend who read my book, Jim, introduced me (on social media) to Greta Thunberg.

Together Jim and I started following her. She was striking for climate action. Many school children across Australia, and then the world, started to follow her example.

Then, in December, Greta made her speech to the UN climate talks in Poland. In one minute she managed to capture the sheer urgency of what the world is facing – and put a call out to everyone to raise their voices by coming out on Fridays.

That following Friday, Jim and I decided we would answer her call. It seemed the most natural thing in the world to go on climate strike.  We didn’t think for a minute we were “too old”.

As parents who care we wanted to be the answer to that call. For me, with young boys, I felt it only right that I should stand on their behalf. After all, it is my own lifestyle, my inaction and my generation that has caused this mess.

Sure, my boys will join when they can, but why should they stand in the cold, miss school and shoulder such a heavy burden? When they can’t, I will.

That was 12 weeks ago. Each week we carry out our #FridaysForFuture strike for climate justice outside the Irish Parliament. Every week our numbers grow: groups of students, teachers, religious, politicians, grandparents, mothers with prams, city workers on lunch break.

It is a wonderful eclectic mix of humanity. We greet each other in a spirit of inter-generational embrace. We realise that we need each other. That we are all the climate generation now.

So my call to ALL parents, grandparents, aunts and uncles – and everyone else in the young at heart group – is to get behind our young people, especially our youngest humans.

They need us now more than ever. There is a golden moment now to show you care and you are sorry for what our generation has done. It doesn’t take much – perhaps one hour each Friday: stand in a public place with your placard.

Post on social media and log it on www.fridaysforfuture.org map. And watch it grow. I guarantee you will not be alone for long.

Hope to see you soon at one of our #FridaysForFuture strikes!

Lorna is the Head of Policy and Advocacy and author of the new book Climate Generation: Awakening to Our Children’s Future. You can follow her progress at https://lornagold.com.