In the seas above Scandinavia, there is a point where the Arctic Ocean collides with the warmer, saltier waters of the Atlantic.

This Arctic region – known as the Barents Sea – has undergone rapid change in recent decades. Air temperatures here have risen at more than four times the global average rate since the start of the industrial era.

There is growing evidence, too, to suggest that the unique structure of the Arctic Ocean could be shifting in this region. Scientists have uncovered “hotspots” where some parts of the Barents Sea are starting to more closely resemble the Atlantic. They call this phenomenon “Atlantification”.

The extent of Atlantification across the Eurasian Arctic Basin and its possible impact on the wildlife that follow ocean currents are active areas of research.

Though the overall scale and impact of Atlantification is still unclear, it could be pushing parts of Arctic towards a climate “tipping point”, Arctic scientists tell Carbon Brief. 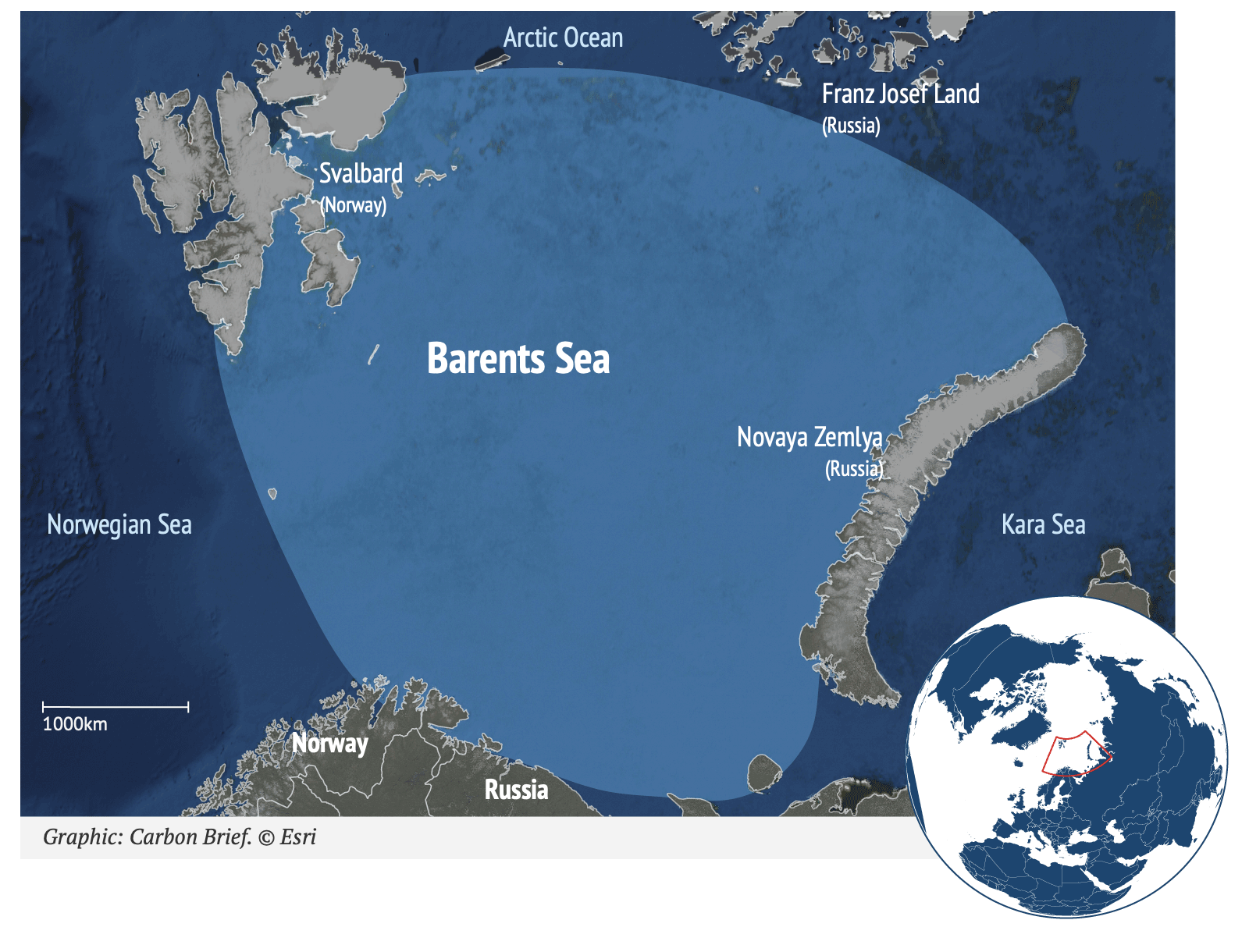 Unlike the Atlantic and Pacific, the upper waters of the Eurasian Arctic Ocean get warmer as they get deeper. The top of the ocean is typically covered by sea ice. Below this is a layer of cool freshwater, followed by a deeper layer of warmer, saltier water delivered to the Arctic from the Atlantic by ocean currents.

The layers are held in place as a result of differences in water salinity. The cool freshwater is less salty than the warmer Atlantic water and so is more buoyant. Therefore, warmer, saltier water sinks below the fresher top layer. In between, a steep salinity gradient forms. This is known as a “halocline”.

“This heat cannot melt the ice. But the question that we’re trying to figure out now in the models is: is this heat really going to remain trapped for good?”

(Tsamados is one of nearly 600 people taking part in MOSAiC, the largest Arctic research expedition ever attempted. Carbon Brief recently joined the expedition for its first six weeks as it passed over the Barents Sea and into the high-latitude Central Arctic.)

Scientists have observed a rapid decline in ice cover above the Barents Sea in recent decades. According to NASA data, the total area covered by sea ice in this region has fallen by almost half since satellite records began in the early 1980s. (Much of the sea ice found in the Barents Sea is blown in from the central Arctic.)

This disappearance of sea ice could be sparking a shift in the structure of the ocean beneath, research suggests.

One possible reason for this is that, when sea ice melts through the summer, it replenishes the freshwater layer that sits above the warmer Atlantic layer. With less sea ice around, the amount of freshwater dwindles, causing the definition between the ocean layers to weaken.

This, in turn, causes the ocean to mix together, drawing more Atlantic heat up towards the surface. This “Atlantification” can, in turn, cause more ice to melt from below, says Tsamados:

“By removing the ice, you are essentially taking off the blanket from on top of the Arctic Ocean and causing it to wake up. This turns the ocean from very calm to something more dynamic.”

Another way that the disappearance of sea ice can disrupt the Arctic’s structure is by leaving it vulnerable to surface winds, he says. These winds can churn up the ocean – again allowing Atlantic heat to be drawn up towards the ocean surface.

Atlantification may also be being driven by warming of the Atlantic water that is brought into the Arctic by ocean currents, says Dr Ben Rabe, leader of MOSAiC’s ocean team and a research scientist at the Alfred Wegener Institute (AWI). He tells Carbon Brief:

“[Atlantification] could be related to warming of the inflow of water. We don’t know yet why exactly it happens.”

The term “Atlantification” was first used in an academic paper published in Science in 2017. The paper, led by Prof Igor Polyakov, warned:

“We show that recent ice reductions, weakening of the halocline, and shoaling of the intermediate-depth Atlantic Water layer in the eastern Eurasian Basin have increased winter ventilation in the ocean interior, making this region structurally similar to that of the western Eurasian Basin.

“This encroaching ‘Atlantification’ of the Eurasian Basin represents an essential step toward a new Arctic climate state, with a substantially greater role for Atlantic inflows.”

Scientists taking part in the MOSAiC expedition are using a range of instruments to study the Arctic Ocean.

The expedition is centred around the Polarstern, a German icebreaker that has been deliberately frozen into the sea ice above Siberia in the high-latitude Arctic. The vessel will drift passively with the ice as it moves northwards over the next year.

On the sea ice, the scientists have set up a sprawling ice camp. The camp is split into various “cities” measuring changes to different parts of the Arctic climate system. One of these is an “ocean city”, which will use various instruments to measure water temperature and salinity at various heights on the water column.

One such instrument is an “ice-tethered profiler”. This device consists of a float tethered to the surface of the ice, which supports a rope which extends down into the ocean. On the rope, a small robotic instrument moves up and down – constantly taking measurements of temperature and salinity at different heights in the water column.

There is no knowing for certain where the drifting ice will take them, but the researchers hope to eventually end up in the Fram Strait, an ocean passage located between Greenland and Svalbard, a large Norwegian Arctic island.

On their journey, it is possible that they will discover more “hotspots” of Atlantification – away from the Barents Sea, says Tsamados: 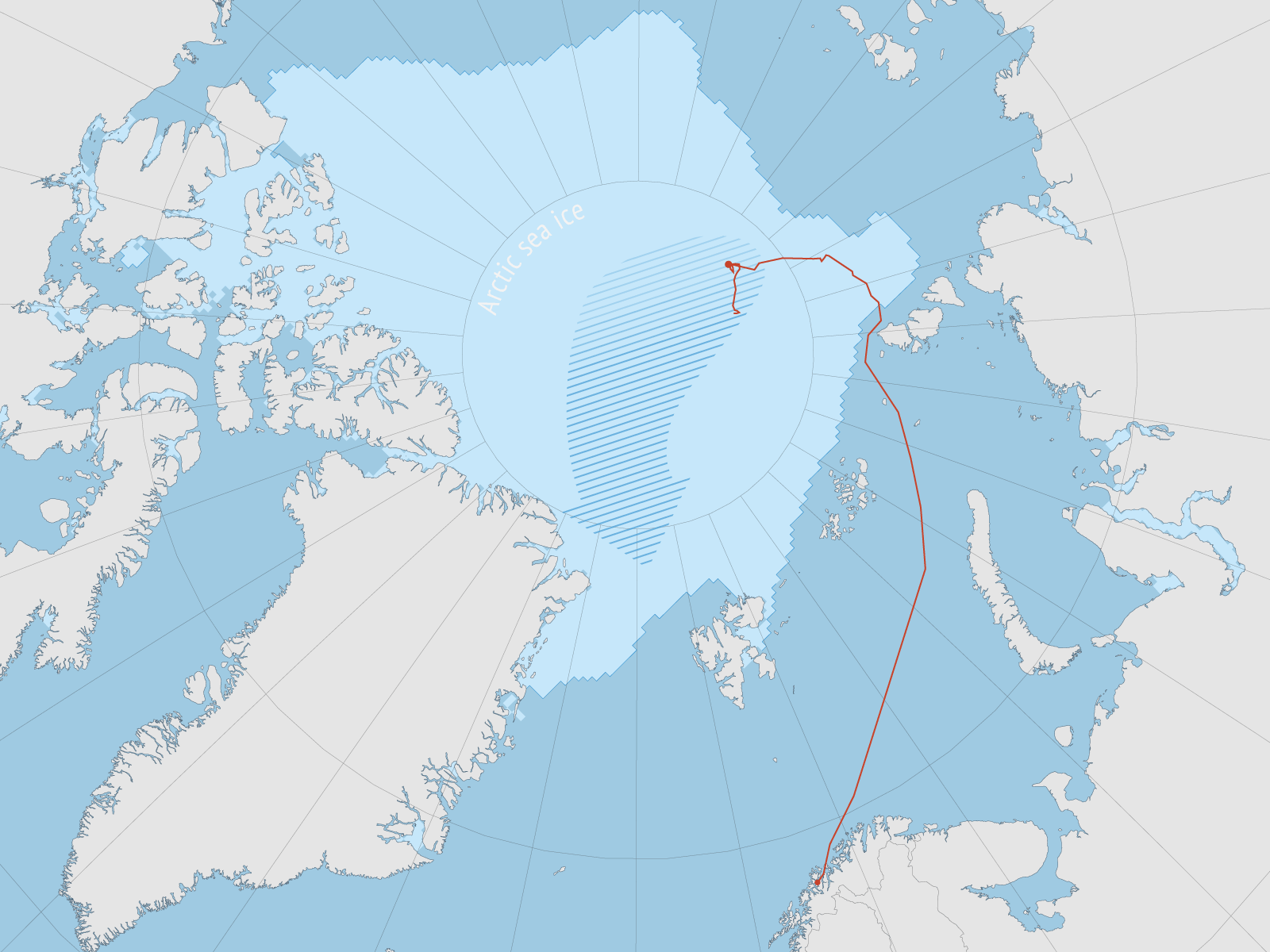 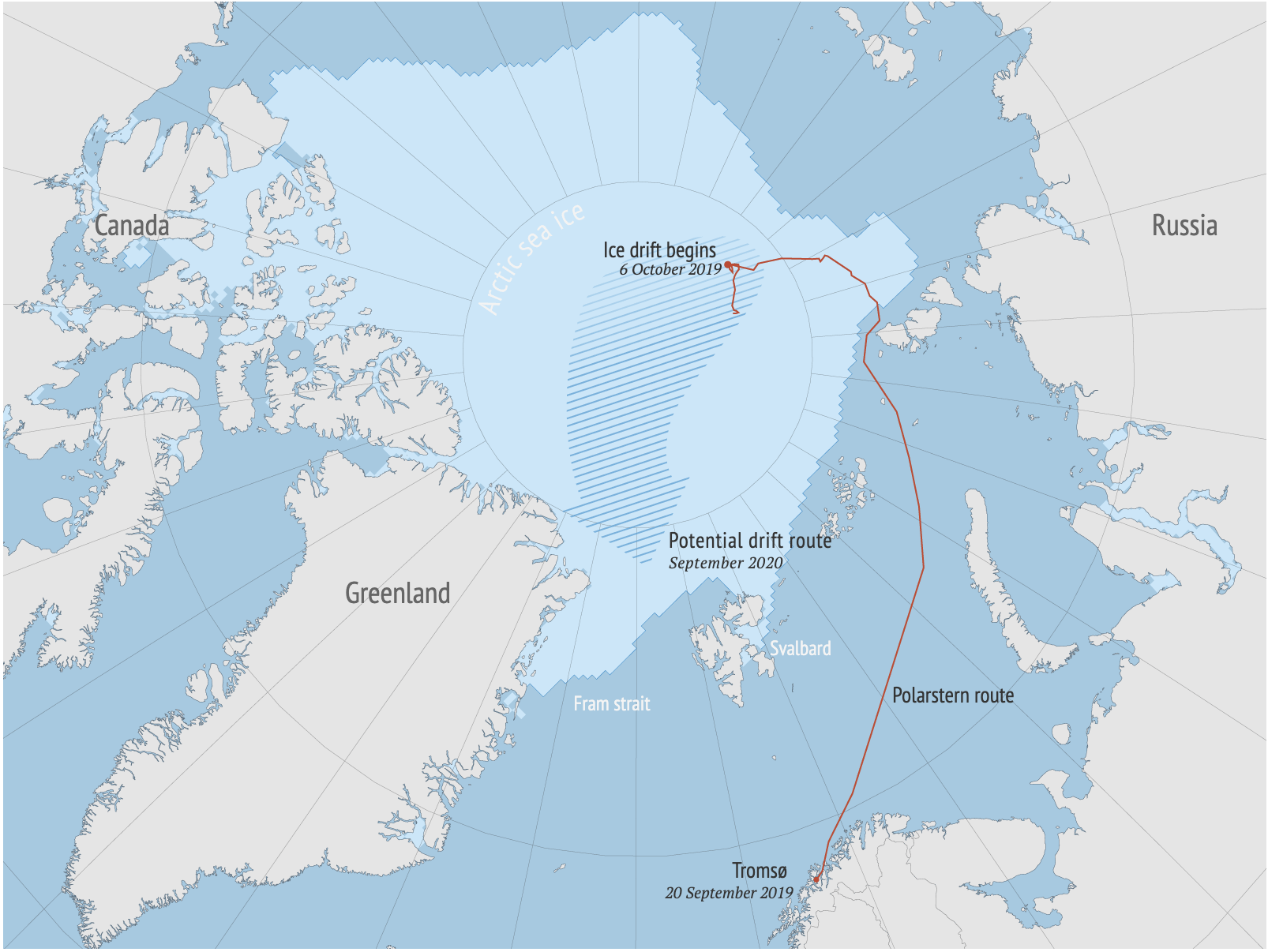 Map showing the Polarstern’s route from its departure from Tromso on 20 September 2019 to around 85 degrees north in the Central Arctic Ocean, where it attached itself to an ice floe on 6 October 2019 (red). The thatched arrow illustrates the area that the ship might drift over on its year-long journey, which will end near the Fram Strait. Credit: Tom Prater for Carbon Brief

As well as impacting sea ice levels, it is possible that Atlantification could pose concerns for the unique wildlife that inhabit the Barents Sea region.

The Barents Sea contains commercially important cod stocks and is an “important feeding ground” for large whales. The region supports 21 whale species, including minke whales, sperm whales, humpback whales and narwhals. It is also home to grey and harp seals, which are preyed on by polar bears.

Many of the fish populations that live here are highly adapted to the unique structure of the Arctic Ocean. Atlantification could be driving fish out of the region and further north, which could, in turn, be negatively impacting the large marine animals which depend on them for food.

Atlantification could also be causing fish populations that are more commonly found in the Atlantic to move into the Arctic.

A study published in 2018 found that black-legged kittiwakes – a seabird which feeds in the Barents Sea and Svalbard archipelago – have shifted their diets to incorporate more Atlantic fish species over the last decade. The study authors wrote that the seabirds could be seen as “messengers of Atlantification”.

The disappearance of ice in the Barents Sea could have far-reaching impacts for wildlife in other parts of the Arctic, says Dr Allison Fong, co-coordinator of the ecosystems research team for MOSAiC and a research scientist at AWI. She tells Carbon Brief:

“Ice acts as an environment that carries organisms from fringe parts of the Arctic to the central Arctic – so this could have implications for what ‘seeding populations’ there are during the growing season.”

The term “seeding population” refers to an animal or plant population that forms in one location and then is transported to another, acting to replenish numbers in the second location.

One outstanding question surrounding Atlantification is the extent to which it could be pushing the Arctic towards a “tipping point” – a possibly irreversible and self-reinforcing change in the climate system.

However, there is still much for researchers to understand about Atlantification and how it relates to other ocean processes – making it difficult to say whether Atlantifcation is truly a self-reinforcing “positive feedback”, says Tsamados:

“This change of pattern in the Barents Sea could be viewed as a tipping point because it appears to be irreversible, at least on the scale of a few years. But, if we were to cool the Arctic for 50 years, it’s possible sea ice would return and these changes would reverse. Without more research, it’s hard to say.”

The post Explainer: How ‘Atlantification’ is making the Arctic Ocean saltier and warmer appeared first on Carbon Brief.