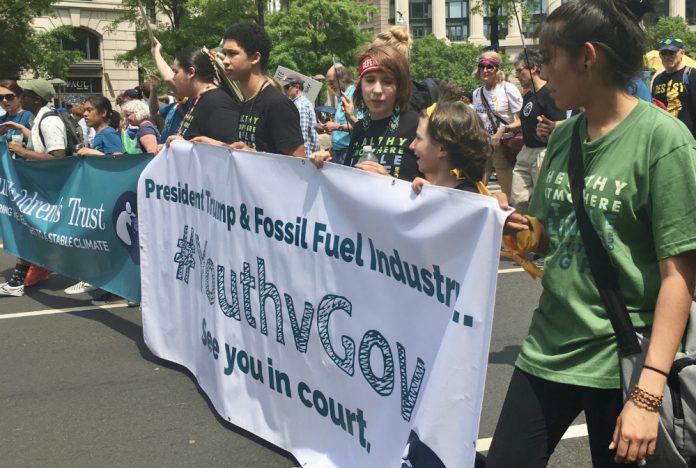 The country’s most powerful fossil fuel lobbies have asked a federal judge for permission to withdraw from a groundbreaking climate change lawsuit, a stark about-face after the groups voluntarily intervened in the case two years ago and fought assiduously to have it dismissed.

The federal lawsuit, Juliana et al v. United States, was brought in August 2015 on behalf of 21 youths, now aged 9 to 21, over the federal government’s alleged failure to rein in fossil fuel development and address climate change. The American Petroleum Institute (API), the American Fuel & Petrochemical Manufacturers (AFPM) and the National Association of Manufacturers (NAM) joined the federal government’s side as intervenors, saying the case was a “direct threat” to their businesses.

It is unusual for intervenors to seek to withdraw from a case. API and AFPM filed withdrawal motions in federal district court in Eugene, Oregon, on Thursday, and NAM filed a similar motion on Monday. It is unclear when federal magistrate judge Thomas Coffin will rule on their requests.

The intervenors and the Justice Department have repeatedly filed motions to have the case dismissed. But federal judges have ruled against them, and the case could go to trial as early as November. In the interim, lawyers for both sides could seek documents from one another and question people under oath through what is known as the discovery process.

Julia Olson, one of the lead counsels for the plaintiffs and executive director of the environmental group Our Children’s Trust, said the industry lobbyists are seeking to withdraw in order to avoid handing over potentially damaging information.

Two separate investigative series in 2015, first by InsideClimate News and then the Columbia University School of Journalism/Los Angeles Times, revealed that the oil industry conducted cutting-edge research on climate change as far back as the 1970s before launching a multibillion-dollar campaign in the 1990s to cast doubt on climate science and delay action to cut fossil fuel emissions.

“After these youths sued the government, the trade associations pleaded their members’ interests would be destroyed if they weren’t allowed to be in the case, but now they are running for the hills,” Olson said in a statement. “Now, they’ve decided they’re better off being on the sidelines than subjecting themselves to discovery.”

The plaintiff lawyers have said they will try to depose key federal officials, including Secretary of State Rex Tillerson. Tillerson was chairman and chief executive of ExxonMobil from 2006 to January 2017 and also served as president of API.

Frank Volpe, an attorney for all three groups, did not answer a request for comment. API also declined to respond.

The intervenors joined in part because of their concerns that the Justice Department under President Obama might not mount a sufficiently vigorous defense. NAM Senior Vice President and General Counsel Linda Kelly indicated that her group seeks to leave the suit in part because its interests align more closely with the Trump administration.

“As the dynamics have changed over the last several months, we no longer feel that our participation in this case is needed to safeguard industry and our workers,” Kelly said in an emailed statement. “We fully support the efforts of the remaining defendants to push back against the plaintiffs’ ill-conceived legal theory of regulation by court decree, and we are confident they will ultimately prevail.”

The lawsuit is based on a legal concept called the public trust doctrine, which argues that the government holds resources such as land, water or fisheries in trust for its citizens. Climate litigators contend that the government is a trustee of the atmosphere, too. The doctrine’s power flows from the Fifth, Ninth and Tenth Amendments, and the Vesting, Posterity and Nobility Clauses of the Constitution, the plaintiffs maintain.

In 2015, environmental plaintiffs in the Netherlands, South Africa and Pakistan, as well as Massachusetts and Washington state, won similar human rights or constitutional cases that force authorities to more aggressively cut carbon emissions.

The plaintiffs in Juliana argue that the federal government has known for at least 50 years that combustion of fossil fuels adds carbon dioxide to the atmosphere and damages the climate. Because it chose to take actions to promote and subsidize fossil fuel use and the resulting greenhouse gas emissions, the government violated their right to protection from environmental degradation under the trust doctrine, the suit alleges.

“The overarching public trust resource is our country’s life-sustaining climate system, which encompasses our atmosphere,” the Juliana pleading says. “As sovereign trustees, Defendants have a duty to refrain from ‘substantial impairment’ of these essential natural resources.”

Until their requests to withdraw, the intervenors and the federal government had countered that the plaintiffs lacked standing to sue and that the constitutional arguments they used lacked merit.