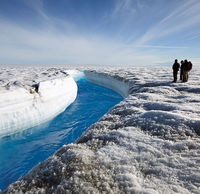 In recent years, accelerated mass loss has been observed from the Greenland Ice Sheet, largely attributed to enhanced surface melt associated with higher temperatures. Given the resultant increase in rates of global sea-level rise, which threaten coastal environments, it is prudent to assess additional contributory factors that drive accelerated melt. Stefan Hofer from the University of Bristol, UK, and colleagues, quantify the connection between Greenland ice loss and changes in summertime cloud cover using a combination of satellite data and climate model simulations.

The authors reveal that Greenland’s summertime cloud cover significantly declined after 1995, a change coincident with a shift toward negative phases of the North Atlantic Oscillation which favour stable atmospheric conditions. This reduction in cloud cover modifies the surface energy balance, driving an increase in downward short-wave radiation that enhances summertime melt: for every 1% decrease in summertime cloud cover, mass loss increases by 27 ± 13 Gt. This cloud-driven effect is shown to play a comparatively greater role than long-wave responses associated with increasing temperatures. Thus, climate models must be able to correctly reproduce observed changes in cloud cover and corresponding impacts on short-wave energy fluxes to accurately simulate surface mass-balance changes.