This is a guest article by Dr Wenju Cai, from the Commonwealth Scientific and Industrial Research Organisation in Australia, and Ke Li from the University of Chinese Academy of Sciences.

In December last year, Beijing and the surrounding area was engulfed in a thick haze that lasted for days. In response, the Chinese government declared a red alert, closing nurseries and schools, taking vehicles off the road, and telling residents to stay indoors.

These “airpocalypse” winter haze events have become something of a regular occurrence in the Chinese capital in recent years. Similar events covered the city in December 2015 and January 2013.

In a new study, just published in Nature Climate Change, we show that the increased frequency of Beijing winter severe haze is not just due to pollution from China’s rapid economic development, but also because of changes in wind patterns caused by a warming climate.

And, as climate change continues, severe winter haze events could become 50% more frequent and 80% longer in duration by the second half of this century.

Despite stringent emission controls implemented by the Chinese government, the frequency of Beijing winter severe haze events has been increasing in recent years.

During these episodes, air pollution from vehicles and industry envelops the capital city in a toxic fog. The cocktail of soot, dirt, dust and smoke in the air is harmful to human health and the environment, and causes massive disruption to economic activities.

Of particular concern are the levels of tiny particulate matter known as “PM2.5” pollutants, so-called because they’re smaller than 2.5 micrometres in diameter. That’s about one thirtieth of the average width of a human hair. When inhaled, these miniscule particles can penetrate deep into the lungs, affecting the respiratory and circulatory systems, with detrimental effects on the cardiovascular, immune and nervous systems.

In the winter haze event of January 2013, for example, average levels of PM2.5 for the month exceeded 130 μg m-3 (micrograms per cubic metre) in 30 cities across 16 provinces. World Health Organisation guidelines recommend the PM2.5 levels for any 24-hour period shouldn’t exceed 25 μg m-3.

Severe haze in Beijing is more likely to develop in winter months – December, January, and February – because of high levels of polluting emissions and a lack of rain to wash pollution out of the atmosphere.

In the left-hand figure below, you can see the usual winter wind patterns over Beijing (indicated by the green dot). The cool, dry westerly and northwesterly winds – driven by the East Asian winter monsoon (pdf) circulation – typically blow pollutants away from the city.

However, during severe haze episodes, these winds weaken or even reverse – as you can see in the December 2015 event shown in the right-hand map.

In addition, as the lower atmosphere is warmer than the land surface, this creates stable conditions that prevents the polluted air from rising. This leads to dramatic increases in the concentration of harmful PM2.5 at ground-level and a sharp decrease in visibility that can bring air and ground traffic to a standstill.

Our analysis shows that the stagnant weather conditions that allow severe haze events in Beijing to develop have increased by 10% between 1948–1981 and 1982–2015. That’s an average increase from 45.5 days to 50.2 days per winter season.

With little in the way of long-term air quality data, previous studies have used various different proxies – such as records of low visibility – as a means of assessing how haze events are changing. In our study, we used a seven-year record of direct observations of PM2.5 at the US embassy in Beijing, covering the 2009-2015 period.

We chose this threshold for two reasons. First, this is well above the average value of winter PM2.5 concentration of 109.7 μg m-3, or the 2009-2015 median value of 99.3 mg m-3. Second, the Beijing municipal government issues an air quality “red alert” when the PM2.5 concentration is forecasted to exceed 150 μg m-3 for 72 consecutive hours. The red alert is the highest of China’s four-tiered, colour-coded warning system, which was adopted in 2013. The first-ever red alert was issued during the December 2015 event.

In our seven-year record there are 164 days of severe haze. Eighty-nine per cent of these events occurred during periods of stagnant weather conditions.

Our data record suggests there is no indication of Beijing haze events abating, despite measures to cut pollutant emissions. This reinforces the theory that pollution is not the only cause.

So, we know that weakening northerly winds and a more stable atmosphere are important ingredients for severe haze episodes. Our next step was to see whether these conditions will become more or less likely as global temperatures rise.

RCP8.5: The RCPs (Representative Concentration Pathways) are scenarios of future concentrations of greenhouse gases. RCP8.5 describes a future where emissions are not curbed and atmospheric CO2 rises to around 1,370 parts per million (ppm) by 2100 (compared to 400ppm now). Global emissions are currently tracking just above the RCP8.5 scenario.

RCP8.5: The RCPs (Representative Concentration Pathways) are scenarios of future concentrations of greenhouse gases. RCP8.5 describes a future where emissions are not curbed and atmospheric CO2 rises to around 1,370 parts per million… Read More

We compared the frequency and persistence of weather conditions that are conducive to haze between the present day (1950−1999) and future climate (2050−2099) in 15 models under a high scenario of future climate change known as “RCP8.5”.

This means that, under a warming climate, Beijing is likely to see more haze events, and when they do occur, they’ll last longer. You can see this in the chart below, which compares historical (blue bars) and future (red bars) haze events per season. 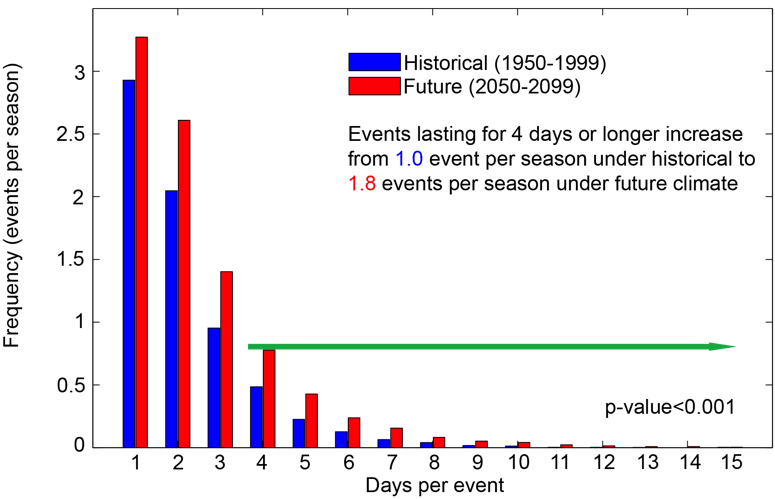 Projected change of frequency in weather conditions similar to January 2013, but with different duration. Blue bars show historical events in 1950–1999, and red bars show projections for 2050–2099, both from climate model simulations. Results are an average of 15 climate models. Source: Cai et al. (2017)

So, why are winter haze events likely to become more frequent and more persistent in our future climate?

The answer lies in the East Asian winter monsoon winds and it’s a continuation of the changes we’re already seeing.

Under greenhouse warming, the land is warming faster than the ocean, reducing the difference in temperature between the land and the ocean, which reduces the strength of the winter monsoon. The weakened northerly winds are then more easily reversed, increasing the likelihood of causing the stagnant conditions that allow haze to form.

Another projected change is that the lower atmosphere is likely to warm faster than the surface, increasing the stability of the atmosphere, which also makes severe haze more likely.

Our results suggest that the issue of tackling Beijing’s severe haze needs to be examined in conjunction with global climate change.