Simulations from the latest climate models have suggested that the Earth’s climate might be more sensitive to increasing atmospheric CO2 than previously thought.

As scientists around the world delve into their models to investigate why, our new study – published in Nature Geoscience – suggests that the changing makeup of clouds might be a crucial factor.

Our research focuses on clouds that contain both water droplets and ice crystals. So far in our warming climate, cloud ice is gradually being replaced with water – a change that has an overall cooling effect.

But what happens when there is no cloud ice left? Our climate model simulations suggest that we then reach a state where warming accelerates. This mechanism alone would be enough to make high values of “climate sensitivity” plausible.

ECS measures the response in global average surface air temperature to a doubling in atmospheric CO2 concentrations. Or, put simply: how much warming we get per increase in CO2 concentration. This number helps us estimate how achievable climate targets – such as the 1.5C and 2C warming limits of the Paris Agreement – are going to be.

For decades, evidence from observed warming, Earth’s distant past and climate models have suggested that ECS falls in a likely range of 2.0-4.5C. But the latest generation of climate models suggest the ECS might be even higher.

The sixth Coupled Model Intercomparison Project, known as CMIP6, is the most recent iteration of an ongoing effort to coordinate and compare model simulations from different climate research centres around the world.

The CMIP6 models suggest a wider range of ECS estimates than in CMIP5 (which fed into the fifth assessment report of the Intergovernmental Panel on Climate Change in 2013-14) – with many indicating an ECS above 5C. This large spread in ECS in CMIP6 in turn leads to a large spread in projected temperatures for the 21st century.

But are the highest ECS estimates – and the hot future they imply – plausible? Recent studies have pinpointed improvements in model representation of clouds as the dominant reason for higher ECS values in CMIP6. But what exactly has changed in these latest models?

Clouds come in different types and with largely varying properties, such as their amount, altitude and whether they are composed of water droplets, ice or a mix of the two.

The diversity of clouds directly affects how they respond to a warming climate.

For example, scientists expect the amount of low subtropical clouds will decline as the climate warms. This will reduce how much solar radiation is being reflected back to space from this region and leads to an increased warming. We call this a “positive feedback” – that is, in a warming climate, these clouds are changed such that they further amplify the initial warming.

But while positive cloud feedbacks have been the focus of extensive research and are supported by theory, observations and model simulations, they are only one part of the story.

Here, the cloud phase composition comes into play. In principle, clouds can consist of liquid droplets, ice crystals, or a mixture of both. The last of these – known as “mixed-phase” clouds – are found at temperatures between 0 and -38C. The fraction of liquid droplets to ice crystals within these clouds is directly connected to the amount of sunlight that they reflect.

For the same amount of water, liquid droplets are smaller and more numerous than ice crystals. As a result, liquid clouds reflect more sunlight back to space than ice clouds.

To understand the implications for future climate, let us conduct a thought experiment: in a warming climate, the ratio of liquid droplets is expected to increase with higher temperatures, leading to more sunlight being reflected by the clouds and a cooling of the surface. Consequently, this cloud phase feedback is what we call a negative feedback: that is, it limits the initial warming.

But what happens when no ice is left and the clouds are already all liquid?

To investigate this, we evaluated the cloud feedbacks from 150-year simulations using version 2 of the Community Earth System Model (CESM2), which estimates a high ECS of 5.3C.

To understand this, we have to look into the different contributions to the cloud feedback. In our simulations, changes in cloud altitude (21%) and cloud amount (16%) can only explain a small part of the feedback change. The main contributor is the change to how much sunlight is being reflected by the cloud, which is also known as the “optical depth” of clouds (63%).

The cloud optical depth is mainly influenced by the amount of total cloud water and its phase. We were able to identify the Southern Ocean as the region where most of this change to the optical depth would happen.

In the first decade of the simulation, the optical depth feedback in the Southern Ocean is strongly negative. You can see this by the dark blue shading over the region in the upper map below. This is no surprise, since the Southern Ocean is known to have an abundance of mixed-phase clouds. If we remember our earlier thought experiment, there is plenty of ice in the clouds that becomes liquid with warming, thereby increasing the optical depth of the clouds and cooling the surface.

However, towards the end of the 150-year simulation period – shown in the lower map – the negative feedback has almost vanished in the Southern Ocean. 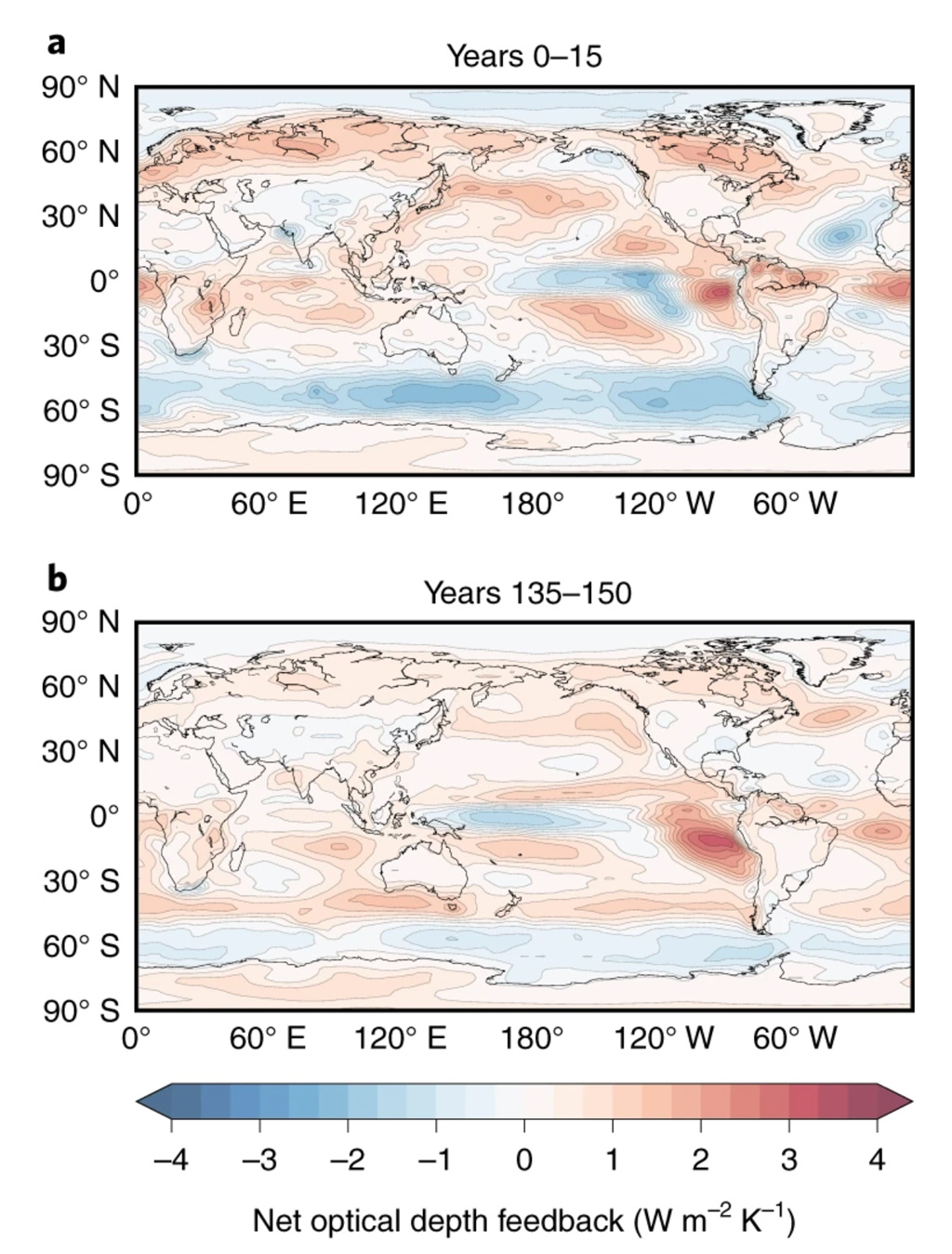 The spatial distribution of the net optical depth feedback (in Watts per square metre per degree Kelvin) for the a) first, and b) the last 15 years of the 150-year simulation following a quadrupling of CO2 with CESM2. Shading indicates a positive (red) and negative (blue) feedback. Source: Bjordal et al. (2020).

So why does this happen? As the temperature increases, more and more of the ice crystals in the mixed-phase clouds over the Southern Ocean become liquid, until virtually no ice is left in the clouds. (In CESM2, this occurs when the global mean surface air temperature increase reaches 3-4C, but it is highly model dependent.) Without any ice left, the negative cloud phase feedback gets exhausted.

But to what extent can we trust these simulations and the model itself?

First, CESM2 simulations show that the model can reproduce the past climate well. This is possible because, at moderate warming, CESM2 behaves as a moderately sensitive model and, therefore, its historical simulation does not overheat.

Second, we show that the vertical profiles of cloud water – liquid and ice – in the Southern Ocean in our simulations are consistent with satellite observations.

Even though CESM2 is only one example of models with high ECS, the mechanism described above must operate both in reality and in other global climate models. However, the importance of the effect depends on the model itself, how much ice it simulates in the mixed-phase clouds in the first place, and how quickly the Southern Ocean warms relative to the global average. As mentioned above, CESM2 correctly simulates a relatively low fraction of cloud ice in the mixed-phased clouds of the Southern Ocean. However, it is well known that most climate models simulate too much cloud ice compared to satellite observations and, therefore, would retain their negative cloud phase feedback longer than CESM2 does.

As for whether climate sensitivities above 5C are plausible, a complete answer to that question requires further testing of these models – for example, with respect to how well they reproduce past climate states both hotter and colder than the present. However, we have demonstrated that having the right cloud phase starting point for such simulations is critical – so far, a majority of climate models have not.

So, to answer the question of what happens if no ice is left and the clouds are already all liquid: It would mean that the climate system loses a natural cooling response. At that point it would enter a high-sensitivity state, which would make it even harder to slow the pace of global warming.