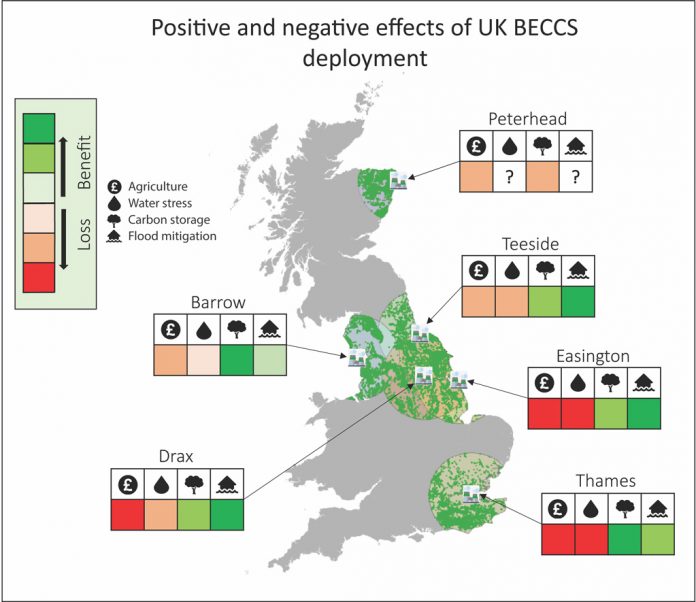 As global temperature rise pushes past 1C above pre-industrial levels, the time remaining to meet the goals of the Paris Agreement becomes increasingly tight.

In addition to deep cuts to global emissions, it is likely – although not certain – that limiting global temperature rise to 1.5C or 2C will require techniques to remove CO2 from the atmosphere in order to generate “negative emissions”.

These techniques – known variously as negative emissions technologies (NETs) and carbon dioxide removal (CDR) – each have their own challenges regarding cost, scalability and public acceptability.

One that has generated particular controversy and attention is bioenergy with carbon capture and storage (BECCS). The combination of burning biofuels for energy and capturing and storing the resulting CO2 emissions does not yet operate commercially in the UK. Yet BECCS has been identified as a promising option for achieving net-zero emissions and features heavily in most of the Intergovernmental Panel on Climate Change (IPCC) scenarios consistent with limiting warming to 1.5C.

In our paper, published in Global Change Biology Bioenergy, we explore potential locations for siting BECCS power plants in the UK. And, for the first time, quantify the co-benefits and trade-offs associated with these sites.

The IAM modelling optimises pathways based on financial cost. As a result, the approach most commonly employed in IAMs to achieve net-negative emissions is to use BECCS, because it not only sequesters CO2, but also produces energy.

However, focusing on cost means that IAMs overlook some of the controversies around large-scale use of BECCS, such as potential environmental and social trade-offs.

In our study, we provide detail to these modelling scenarios by quantifying and mapping for the first time some of the relevant environmental considerations, taking the UK as a case study for BECCS with domestic bioenergy crops. (Previous research has identified BECCS sites in the US.)

Below is a video summary of the study:

We outline a set of plausible assumptions of how BECCS could be pursued in the UK, including power-plant location, size, and operation parameters, as well as looking at the potential to grow dedicated bioenergy crops locally to the power station (within 100 km), avoiding imports.

As an estimated 1.5bn tonnes of CO2 equivalent (GtCO2e) of storage capacity is estimated to be available in the North Sea by 2030, we focus mostly on locations where captured CO2 could easily be exported here. This could be via an offshore pipe network or, initially, via gas carrier vessels.

The six locations we focus on are: Barrow, Drax, Easington, Peterhead, Teesside and the Thames.

The next step was to determine the favourability of the six potential UK locations for a 500 megawatt (MW) BECCS power plant operating on local biomass resources.

We developed a land-use optimisation tool for the study. This takes into account the potential impacts a BECCS power plant and associated bioenergy crops would have on ecosystem services. These services represent the wider benefits that the natural environment provides for humans, which BECCS could affect.

We ran this optimisation at each of the six UK locations to determine the socially optimal land-use scenarios associated with BECCS at each site. The model quantifies the benefits and drawbacks of the different ecosystem services and produces an overall monetary value of net annual “welfare”.

The model was also run without integrating environmental values, optimising based only on market values of the land, showing a contrasting land-use scenario and lower societal value compared to the optimisation with ecosystem services.

This is illustrated in the graphic below, which shows how land-use for bioenergy crops changed when it was optimised on market values compared to welfare values (including ecosystem service values).

Our results showed the impact of BECCS on ecosystem services is dependent on both location and scale – with the ecosystem service benefits decreasing as power station size increases and more land is required.

We found the site of an existing bioenergy power station at Drax Power is a strongly favourable location, with estimated annual welfare values (from the basket of ecosystem services quantified) of £39m, driven by the valuable flood mitigation potential of developing bioenergy crops in this region. After Drax, the next most suitable site was Easington (£25m), also supported by high flood mitigation benefits.

(Bioenergy crops have been described as operating like a “green leaky dam” (pdf), slowing the flow of flood water as well as retaining more water than grassland or other crops. They also have a high “canopy interception”, which means their foliage intercepts a lot of rainfall, thus delaying how quickly rainfall reaches the ground.)

We estimated that welfare values at the Barrow (-£6m) and Thames (£2m) locations were notably lower, with flood mitigation and soil sequestration opportunities much more limited.

We also modelled the impact of a 1GW power station, finding that the environmental benefits accrued at 500 MW mostly disappeared at the larger 1GW size. Welfare losses were particularly pronounced at Barrow and Thames under a 1 GW BECCS power plant, where ecosystem service benefits had already been exhausted at the smaller 500 MW BECCS power plant. The chart below shows the declining welfare benefits as the amount of BECCS deployed increases.

These results help inform the current debate about NETs and BECCS. Concern for the environmental impact of BECCS are widespread, driven by fears that very large quantities of land will be converted to growing bioenergy crops under emission scenarios relying on the technology.

The UK’s Committee on Climate Change (CCC) suggests there is an upper limit of 15GW for deploying BECCS in the UK, which would capture 67 Mt of CO2 per year. At this level, we conclude that a reliance on BECCS using only domestic bioenergy crops to meet the Paris Agreement in the UK would be highly challenging, requiring a large proportion of available land and generating significant environmental costs.

However, perhaps surprisingly, we determine that a limited and targeted deployment of BECCS could help towards meeting net-zero emission targets whilst also supporting ecosystem services, such as delivering valuable flood mitigation benefits in the Yorkshire and Humber region of England.

For a targeted BECCS strategy to achieve a “win-win” for negative emissions, energy and ecosystem services in the UK and elsewhere more research is needed to quantify and map the environmental and societal impacts of BECCS at the regional scale.

But time is short. Infrastructure will need to be in place in the next decade if BECCS is to support net-zero targets by 2050 or earlier. Right now, we have flexibility in choosing locations and there remains the opportunity to locate BECCS infrastructure which can support ecosystem services as well as generate negative emissions.

Policymakers in the UK are currently developing a payment for ecosystem service policy that would reward landowners for activities supporting public goods. This presents an opportunity for policymakers to incentivise deployment of bioenergy crops where they can deliver benefits including flood mitigation and soil carbon sequestration.