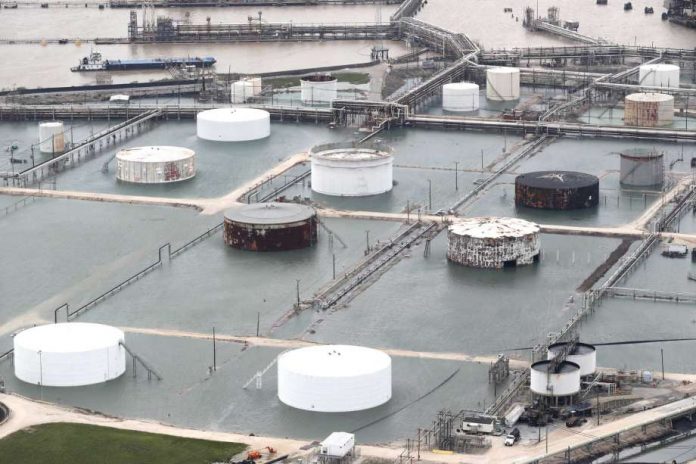 A neighborhood is inundated by floodwaters from Tropical Storm Harvey near east Interstate 10 on Tuesday, Aug. 29, 2017, in Houston. ( Brett Coomer / Houston Chronicle )

A neighborhood is inundated by floodwaters from Tropical Storm Harvey near east Interstate 10 on Tuesday, Aug. 29, 2017, in Houston. ( Brett Coomer / Houston Chronicle )

Harvey – and storms to come – raise worries about dam safety

The state climatologist is warning that Texas dams will become less able to withstand extreme weather events like Hurricane Harvey, which are expected to occur more frequently as the earth’s atmosphere and oceans warm in coming years.

Dams are designed with a wide margin of safety and are meant to withstand extreme, worst-case scenarios that are never expected to happen. But what stunned state climatologist John Nielsen-Gammon and other weather experts was that Harvey exceeded or matched the preposterous amounts of rainfall that dams in Texas are built to hold back.

“The probable maximum precipitation amount should never be reached,” said Tye Parzybok, the chief meteorologist at MetStat, a Colorado-based company that helped Texas calculate the rainfall amounts. “It should never get close to it.”

After Harvey, dam regulators will have to recalculate the maximum amount of water that dams should be capable of holding back, said Nielsen-Gammon. Climate change means that powerful storms are bringing vastly more rain than they did a century ago, he said.

“I’m not saying they’re unsafe,” said Nielsen-Gammon of Texas’ dams. “They will be less safe than they were designed to be.”

While the relationship between climate change and hurricanes is uncertain, there is near unanimous agreement among scientists that the increasing concentration of carbon dioxide in the atmosphere – much of it from burning fossil fuels – is raising global temperatures and warming the oceans, causing more water to evaporate. The buildup of moisture, in turn, is leading to more extreme rains; the record-breaking rainfall brought by Harvey – 51 inches in Harris County – was likely up to 7 percent greater than it would have been a century ago because of climate change, said Nielsen-Gammon.

Local and federal governments, regulators and private industry are now grappling with managing the effects of climate change in designing and constructing buildings, highways, bridges, water and sewer systems and other public works. There is no method, yet, for factoring climate change into the rainfall amounts dams should be capable of withstanding – but that’s something Nielsen Gammon hopes to change.

On Friday, he will give a presentation in San Marcos at a conference of civil engineers making the case for incorporating climate change into rainfall measurements that are used to design dams, nuclear power plants and other projects that are meant to never fail.

There are 4,008 state-regulated dams in Texas, more than 1,200 of which are considered high risk, meaning their failure would kill people, according to the Association of State Dam Safety Officials. Dams are designed to hold a hypothetical amount of rainfall over a given time period and over a certain area, a calculation called a probable maximum precipitation amount.

The calculations are based on historical rainfall data, which is part of a complex calculate that estimates a margin of safety. Last year, after nearly 40 years since probable maximum precipitation amounts were first calculated for building dams, the Texas Commission on Environmental Quality, which oversees dam safety, updated the amounts the state’s dams should be designed to hold.

But Harvey already has challenged those values, and that should warrant another update that factors in a storm that holds the record for most rainfall in the continental United States, said Nielsen-Gammon. He added that there is no reason to assume that record won’t be matched, or exceeded, in the future.

“Climate scientists expect – based on observations and models – that the maximum is increasing and will continue to increase,” he said. “The frequency of extreme rainfall events is increasing and it’s expected to do that because of climate change.”

To read this article in one of Houston’s most-spoken languages, click on the button below.