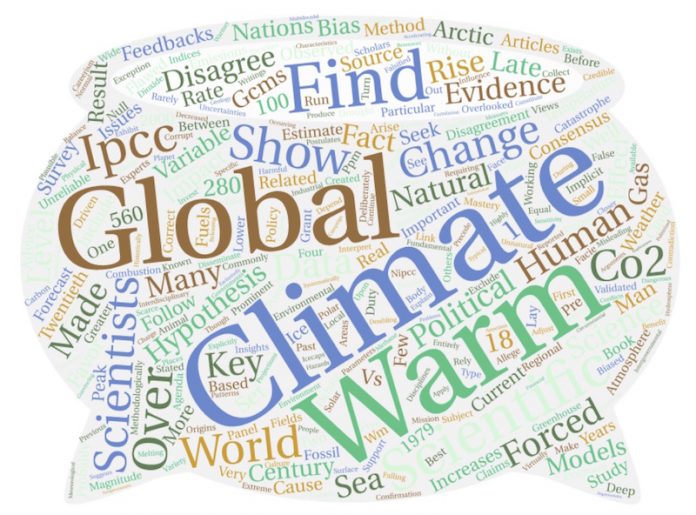 If you teach physical science your mailbox may have recently been assaulted by a tract from the Heartland Institute titled “Why scientists disagree about global warming.” The lie in the title is an excellent preview of the book’s contents. Its numerous specific errors mask the fundamental mistake of all these piecemeal attacks on the scientific consensus: lack of a coherent narrative to describe the data.

The two essential ingredients of science are data collection and a coherent narrative about what the data tells us. Heartland’s repeated attacks on climate science utterly fail on the second point. In decades of promoting their pro-fossil fuel agenda Heartland has never presented a single coherent story to explain recent or past climate changes, and none of their accomplices have either (Benestad et al. 2015). Like many science deniers, they confuse science with data collection. They imagine that a story can be discredited by discovery of a misplaced comma.

A kettle of words is not a story.

(These words are from the Heartland tract.)

Scientists from many fields have collected mountains of data about changes to the global climate. They have systematically refined the century-old hypothesis that greenhouse gases maintain our global temperature (Arrhenius 1896). That hypothesis has now consolidated into the well-established consensus that the recent massive addition of extra carbon dioxide to our atmosphere is changing the climate.

Key aspects of an accepted scientific explanation are (i) it fits all existing relevant data; (ii) it obeys the known physical laws; (iii) it continues to work as measurements get better and new data is collected; (iv) it makes predictions that can be tested. The narrative of anthropogenic climate change magnificently satisfies all those requirements.

World wide observations and measurements of temperatures, atmospheric composition, Arctic thawing, ecological shifts, sea level rise, increased rain intensity, and glacial melting are all explained by the fact that the Earth is warming. Furthermore, millennia of past variations in the climate, which are revealed in ancient geological and ice records, are also well explained by our ever-improving understanding of the Earth’s climate system.

The consensus understanding of climate change follows the established laws of astronomy, physics, chemistry, biology, geology, oceanography and other disciplines. It has advanced with intense discussions among experts from different fields who work to understand  how different parts of the Earth interact. Unlike the Heartland approach, real climate science does not rely on imaginative “cycles” or inventive notions about the behavior of greenhouse gases.

New observations continue to strengthen and solidify the science of climate. For example, a recent study of 37 glaciers around the world over the last century found the retreat of all but one could only be explained by the changing climate (Roe et al. 2016).

A good story about how things work also anticipates how the world will unfold in the future. Again, climate science has been making remarkably good predictions since the 1970s (Nuccitelli 2015) and IPCC projections are on track.  Meanwhile even recent “predictions” by Heartland’s denialist friends have failed miserably.

A robust scientific explanation seeks to incorporate new information to update and refine a coherent story. It doesn’t view each piece of data as an isolated event, divorced from the rest of the world. At a bare minimum, explanations of different parts of the story must not contradict one another. Furthermore, a really great science story can be explained to everyone from a child to a scientifically educated adult. It holds together at a basic level and becomes stronger with each layer of detail described.

A cardinal rule of science is that anyone who attacks a story that explains the data must provide a more convincing story to replace it. Because Heartland has utterly failed to form a coherent theory of any kind, they persist in making unfounded attacks on the evidence and on the scientists who have assembled it into a truly remarkable history of the Earth and projections for its future.

Heartland resembles the pathetic relative of a convicted con-artist who stands outside the courthouse whining that the fingerprints on the fifth incriminating bag of cash were smudged, the judge’s second cousin hates gambling, and all the convict’s business partners swear he didn’t do it.