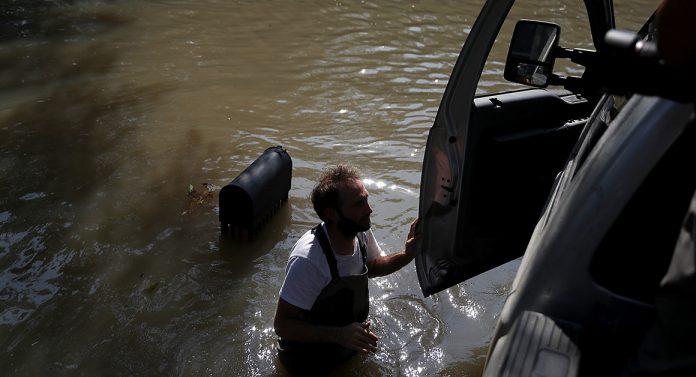 House Republicans overcame bipartisan opposition Tuesday to pass a bill that would reauthorize and overhaul the National Flood Insurance Program, which has strained to pay out billions of dollars to policyholders after this year’s run of devastating hurricanes.

The House passed the bill in a 237-189 vote following months of debate and dealmaking over how much to scale back the primary tool that millions of homeowners rely on to protect themselves from the financial risks of flooding.

The bill would reauthorize the NFIP for five years and enact several operational changes championed by Financial Services Chairman Jeb Hensarling (R-Texas), the fiscal conservative who led an effort to pare back the program as part of the reauthorization bill.

During the process, Hensarling clashed with influential business groups and coastal Republicans who argued that his committee’s proposals threatened homeowners and local economies.

After agreeing to a series of concessions going back to this summer, Republicans secured the votes they needed. The bill the House passed Tuesday retained measures sought by Hensarling that would make it easier for private companies to compete with the NFIP in the flood insurance market and prohibit the government from offering coverage to certain homes that flood over and over again.

The source for energy and environment news — weekday mornings, in your inbox.

By signing up you agree to receive email newsletters or alerts from POLITICO. You can unsubscribe at any time.

“It is a bankrupt program,” Hensarling said on the House floor. “It is unsustainable.”

The vote marked Congress’ first attempt this year to pass a long-term renewal of the flood insurance program before it expires on Dec. 8. The Senate, where negotiations are ongoing, was not expected to take up the House package.

The debate in the House this week underscored why progress has been so slow on the issue.

Hensarling and other lawmakers who helped draft the House bill argued that the changes they were seeking in the program would help protect taxpayers while giving consumers the opportunity to find more affordable options beyond what the government offers.

But Republicans representing coastal districts urged their colleagues to vote against the bill, warning that it would make flood insurance less affordable for their constituents and threaten the solvency of the NFIP. They were unpersuaded by sections of the bill that would limit premium increases and allow states to create programs that would identify homeowners who need financial assistance. Other sections of the bill would escalate premium increases and charge homeowners more to fill a reserve fund.

Critics argued that the nascent private flood insurance market championed by Hensarling would not necessarily be a boon for homeowners, and that insurers would likely cherry pick the least risky properties while leaving behind the rest for the government to cover.

Until two weeks ago, House Majority Whip Steve Scalise, who represents a southern Louisiana district, had also withheld support for the bill. Scalise, the No. 3 House Republican, came around after Hensarling agreed to ease proposed penalties for properties that repeatedly flood.

Still unsatisfied, Rep. Frank LoBiondo (R-N.J.) spoke out against the legislation on the House floor Tuesday, questioning why the concerns of his constituents and others in the Northeast didn’t have more sway in the debate.

“I’m angry and disappointed I have to fight with my own party on these issues,” said LoBiondo, who last week announced his plans to retire.

In the end, 14 Republicans and 175 Democrats voted against the bill. Fifteen Democrats voted for it. The White House on Monday said it supported the bill, despite wanting to see additional changes to the flood program.

The House Financial Services Committee drafted the legislation well before hurricanes Harvey, Irma and Maria ravaged the southern coast of the United States and its territories. As the proposal lingered for months, the monster storms added a new sense of urgency behind efforts to update the flood insurance program.

An earlier series of devastating hurricanes had overwhelmed the program’s financial resources, forcing it to borrow money from Treasury that it could not repay.

A new set of claims piled up this fall, and the program hit its roughly $30 billion borrowing limit. In response, Congress agreed in October to forgive $16 billion of the NFIP’s debt.

The program borrowed another $6.1 billion on Nov. 9, FEMA said Tuesday, bringing its debt to more than $20.5 billion.

“No legislation currently pending before the 115th Congress addresses the underlying, core challenge facing the NFIP — the reality that the NFIP was not designed to address catastrophic losses,” said Tom Glassic, a consultant who previously served as senior insurance counsel to the Financial Services Committee.

“This makes it likely we’ll be dealing with many of the same issues in five or six years or whenever the NFIP is next up for reauthorization.”

Meanwhile, senators from both parties oppose the proposals in the House package and are pushing their own competing bills. One would freeze interest payments that the NFIP pays on its debt — an issue the House bill does not address directly.

Sen. John Kennedy (R-La.) said the House proposal failed to strike the right balance between “the integrity of the program, the financial stability of the program and the affordability.” Sen. Bob Menendez (D-N.J.) said it was “Republicans’ first concrete step towards dismantling a critical program that more than 200,000 New Jersey families rely on.”

“It doesn’t resolve all of the issues that we have in the Senate,” Banking Chairman Mike Crapo (R-Idaho) said in an interview Tuesday.

This article tagged under:

Missing out on the latest scoops? Sign up for POLITICO Playbook and get the latest news, every morning — in your inbox.