Home Science Mitigation How to save the planet: Cut holidays, sell the car and don't... 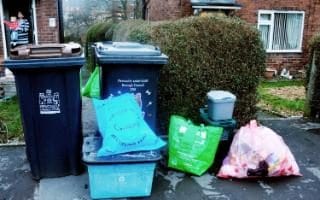 Jetting off on just one summer holiday is so bad for global warming that it wipes out the benefits of 20 years of recycling, a new study has shown.

Although householders are encouraged to save and sort their rubbish, new research from the University of Lund, Sweden, and the University of British Columbia, Canada, has shown that it has far less impact when compared with cutting down on flights, ditching the car or switching to a vegetarian diet.

In its green strategy, the Department for Environment, Food and Rural Affairs, (Defra) claims recycling is vital for lowering greenhouse emissions and councils have brought in an array of complex rules and bins for collecting and separating refuse. The UK has also signed up to EU targets to recycle at least 50pc of household waste by 2020

But the new study, published in Environmental Research Letters, argues that governments and schools must do more to communicate the most effective ways for people to reduce their carbon footprint rather than concentrating on practices which have little impact.

Instead of encouraging recycling of waste, or switching to energy saving light bulbs, they say the public should be advised to avoid air travel, live car-free,  eat a plant-based diet and have smaller families.

“Those of us who want to step forward on climate need to know how our actions can have the greatest possible impact,” said lead author Seth Wynes, a doctoral student of the University of British Columbia.

“These actions, therefore, have much greater potential to reduce emissions than commonly promoted strategies like comprehensive recycling which is four times less effective than a plant-based diet or changing household light bulbs, which is eight  times less effective.”

They also looked at school textbook and government advice from across Europe, Canada the US and Australia and found that most policies focussed on the strategies which had the least impact.

Having multiple children was found to have the largest impact on climate, with each child creating nearly 60 tonnes of C02 each year. Avoiding a one-way transatlantic flight could save around 1.6 tonnes of carbon dioxide emissions, while a round-trip to Australia would prevent 4 tonnes – 20 times the saving made by a year’s recycling, which is around 200 kg a year.

Experts pointed out that recycling also brings benefits aside from cutting emissions, such as reducing landfill and preventing plastic polluting the oceans.

But Hannah Martin Head of Energy at Greenpeace said:  It’s increasingly important for us to make informed choices, whether that’s about the car we drive, the transport we take, the food we consume or the products we buy.”

The researchers said advising people to change their diet, or have fewer children may seem controversial but it is crucial for the future of the planet.

Study co-author Kimberly Nicholas, of Lund University said: “We recognize these are deeply personal choices. But we can’t ignore the climate effect our lifestyle actually has.

“Personally, I’ve found it really positive to make many of these changes. It’s especially important for young people establishing lifelong patterns to be aware which choices have the biggest impact.

“We hope this information sparks discussion and empowers individuals.”

Last year Defra figures showed the amount of household waste being recycled by British families has fallen for the first time, official figures show, amid warnings that people are increasingly confused about how to clean and separate rubbish properly.

Common mistakes such as mixing cans and bones from meat in with other recycling, and attempting to save food-encrusted cardboard, are causing tonnes of waste to be rejected by recycling units.

Last year UK recycling fell by 0.6 per cent from 44.9 per cent of total household rubbish.

However campaigners said it was up to big business and governments to tackle climate change rather than leaving it up to individuals.

Friends of the Earth climate campaigner Simon Bullock said: “The biggest responsibility to meet the challenge of climate change lies with corporations and governments.

“Individual lifestyle changes do count – but the really significant changes needed to keep temperatures within limits should come from governments and industry.”

Defra said only one fifth of waste from councils now ends up in landfill.