Home News How we work: Getting input from scientists

Over the years, we’ve published many rebuttals, blog posts and graphics which came about due to direct interactions with the scientists actually carrying out the underlying research or being knowledgable about a topic in general. We’ll highlight some of these interactions in this blog post. We’ll start with two memorable exchanges with scientists Bärbel Winkler had when putting together two blog posts about research involving seals and birds, followed by other examples about ice cores, the jetstream and the history of climate science originally written by David Kirtley and John Mason and with illustrations created by John Garrett (jg).

During a presentation by Prof. Dr. Martin Wikelski (Max Planck Institute for Ornithology) at a conservation conference in January 2014 Bärbel heard something about climate research involving seals for the very first time. This sounded intruiging so she sent an email to Dr. Wikelski after the conference to ask for some additional details and he promptly replied with some published papers and contact information for the researchers actually working with the seals and the data they collected. Next, she contacted Prof. Dan Costa at the University of California Santa Cruz (UCSC) and his research team who were also very forthcoming with providing information, pictures and helpful feedback for the blog post “Seal of approval – How marine mammals provide important climate data” published in June 2014. This was Bärbel’s first experience contacting researchers about one of their projects and it couldn’t have been more positve! 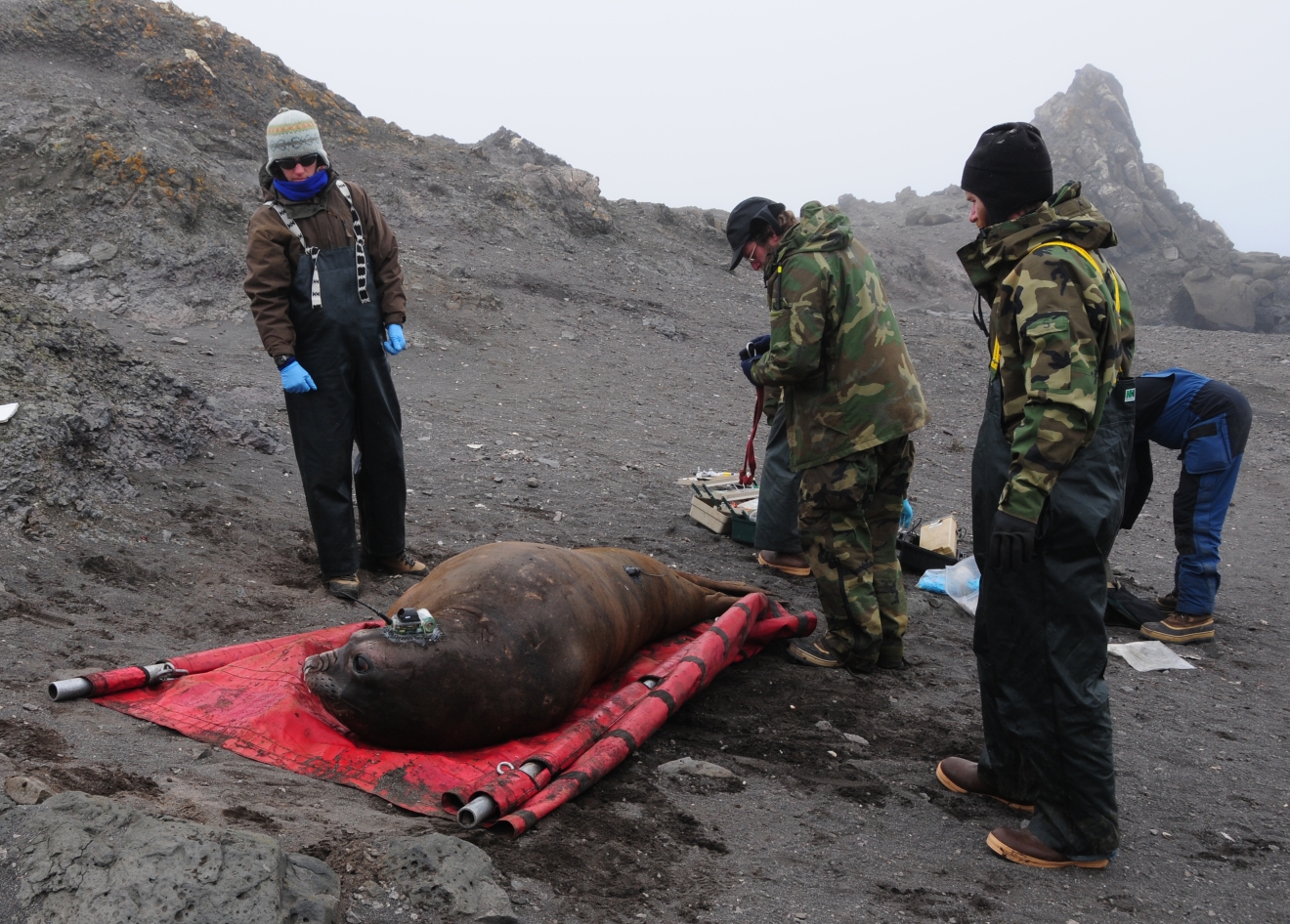 Another opportunity to touch base with researchers presented itself in the same year when Bärbel was putting together her blog post about a climate themed tour through a zoo. One of the topics she wanted to cover were the changes in food supply for great tits, a common garden bird in Europe. Earlier, she had stumbled upon a simple graphic depicting how the timing of hatching and food supply for the tits had changed in the Hoge-Veluwe Nationalpark in The Netherlands. Bärbel touched base with the project’s lead researcher Prof. Marcel Visser and his then colleague Phillip Gienapp to ask if it’s okay to use the graphic and whether newer data was already available. The answer “Yes” to the second question led to jg creating a newer and more detailed version of the graphic in collaboration with the researchers. The graphic is now also available in German and Dutch and the project is described in quite some details in the blog post. 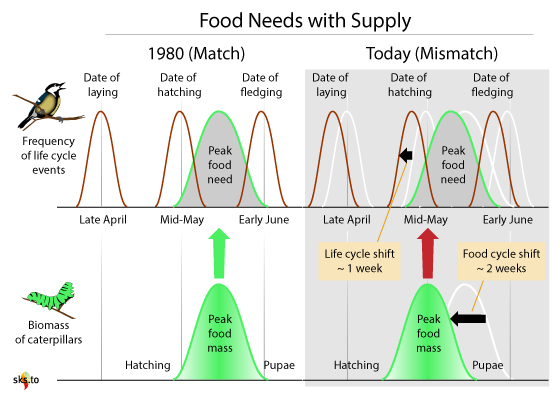 Based on the long-term study in the Hoge-Veluwe Nationalpark conducted by Marcel Visser and Phillip Gienapp (graphic: jg)

We sometimes get interesting questions from readers via our contact form. During 2017 two such questions related to ice cores piqued David Kirtley’s interest. At the beginning of the year we received a question about a statement in a blogpost on the Lawrence Berkeley Lab’s website describing the research project “IMPACTS: Investigation of the Magnitudes and Probabilities of Abrupt Climate Transitions”. It had this to say about the Younger Dryas, one of Earth’s best-known periods of abrupt climate change:

[C]limate change has occurred with frightening rapidity in the past and will almost certainly do so again. Perhaps the most famous example is the reverse hiccup in a warming trend that began 15,000 years ago and eventually ended the last ice age. Roughly 2,000 years after it started, the warming trend suddenly reversed, and temperatures fell back to near-glacial conditions; Earth stayed cold for over a thousand years, a period called the Younger Dryas (named for an alpine wildflower). Then warming resumed so abruptly that global temperatures shot up 10 °C in just 10 years.

A Skeptical Science reader noticed this passage and wrote to us asking if this was accurate, especially that last sentence about an alarming 10 degree jump in just 10 years. Google searches led David to papers published by Dr. Richard Alley who he then contacted. In his response, Dr. Alley explained that the temperature increase was “for Greenland, and applies moderately well around the North Atlantic, primarily as a wintertime change because there was a rapid shift from wintertime sea ice to wintertime open water in important regions.” He continued:

I can provide lots of chapters and verses on all of this, but the skinny version is that when the abrupt shifts happened, they primarily involved circulation rather than greenhouse gases, they didn’t do a lot to global mean temperature, but they did do a lot to regional climates in many places, with large, rapid changes in north Atlantic temperatures, rapid shifts in monsoonal rains and in the edges of the tropical rain belts, smaller shifts in northern temperatures away from the North Atlantic, and lagged and opposite shifts in southern temperatures (so northern warming was followed by southern cooling).

The resulting blog post From the eMail Bag: Abrupt Climate Change in Greenland’s Past? provided the important lesson to always check for references for facts which seem extraordinary, even for facts which come from trusted sources like Berkeley Labs. Google is your friend, and may be all you need to get started. Searching for answers to confusing information may lead back to the original research and the scientists who produced it. 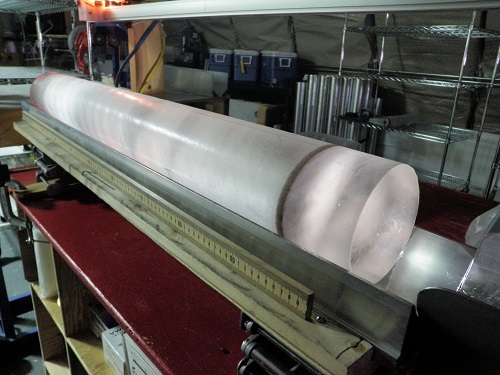 Later in the year David set about answering an email asking about the time-resolution of the ice ages graph and how it compares to the resolution in the Keeling Curve:

“Is there some study or dataset that shows the ice core samples with the same time resolution we see in modern measurements of CO2 such as the Keeling Curve; so that we can know for sure if there were any large-amplitude spikes of CO2 at earlier times (back to ~800 k yrs BP)?” 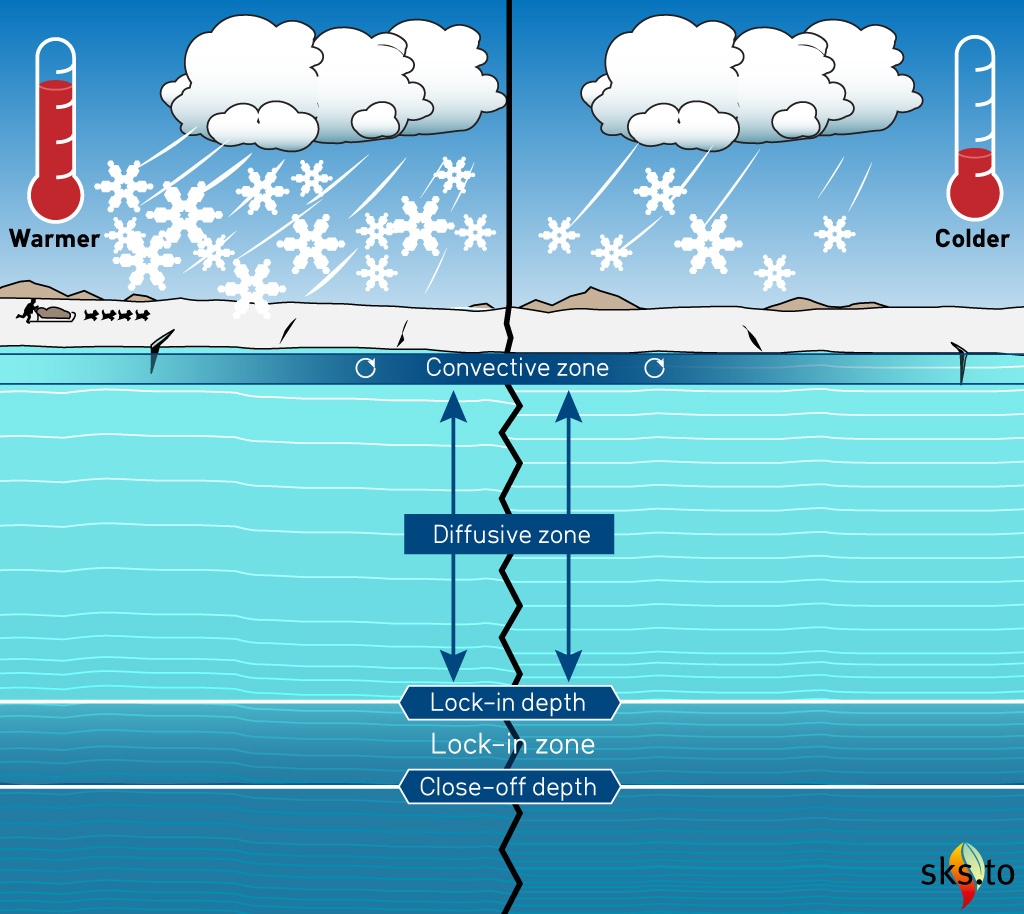 Figure 4. Cross section of firn at a warm, high-snow-accumulation site (left) and a colder, low-accumulation site (right). The depths of firn layers and zones from actual ice core sites vary and are not the same thicknesses at each site as shown in this diagram. Illustration by jg.

In 2013, John Mason decided to write A Rough Guide to the Jet Stream because even back then barely a week went by in the Northern Hemisphere without the jet stream being mentioned in the news. But rarely did such news items explain in detail what it is and why it is important. The blog post turned into a start-from-scratch primer based on John’s knowledge as a severe weather photographer plus some valuable assistance from academia into where the research has been heading.

In researching his blog post, John had a useful discussion with Dr Jennifer Francis of the Institute of Marine and Coastal Sciences at Rutgers University, New Brunswick. Dr. Francis had published extensively on Arctic climate change and in recent years had been studying changes to the jet stream. John was especially interested to learn what the future might bring. Would any pattern of change to the jet stream be linear in fashion? Dr Francis replied with this:

“Hard to say if it’s linear or otherwise – not enough years of data yet, and it’s not clear if models are able to capture the behavior realistically. Some recent papers suggest they don’t simulate blocking patterns well, for example, which are key for extreme weather. We have looked at a 4xCO2 run of the NCAR GCM, however, which suggests that (like the real atmosphere) the 500 hPa zonal winds will weaken substantially in all seasons (not just fall, which is the strongest signal in the real world), and also that the flow will become more meridional, that is, the ratio of north-south winds relative to the total flow will increase. I think the tendencies we’re seeing in the real world will continue to increase. As we lose all the summer ice, the response in the fall may plateau somewhat (although Arctic Amplification will continue via the other factors), but as ice in the other seasons declines, we should see the response become stronger all year long.”

For a lot more information about this topic, please check A Rough Guide to the Jet Stream! 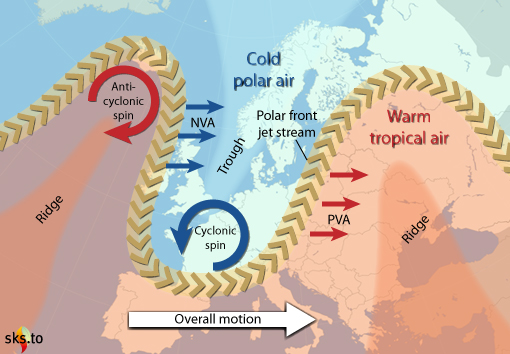 Prompted by a casual exchange on Facebook with climate scientist Katharine Hayhoe, John Mason and John Garrett (jg) teamed up in the first half of 2020 to update both the text and the graphics of The Climate Science History article to give credit where credit is due by adding Eunice Foote (1819-1888). She had been investigating the effects of sunlight, using glass tubes containing air and other mixtures of gases – including carbon dioxide. Her results were announced at the 1856 meeting of the American Association for the Advancement of Science, and published in the American Journal of Science and Arts in the same year. The paper was entitled, ‘Circumstances Affecting the Heat of the Sun’s Rays’. 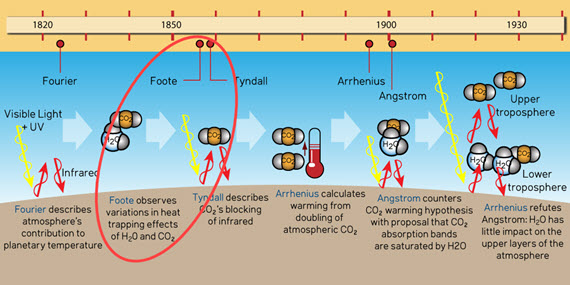 Eunice Foote now makes an appearance in the updated versions of jg’s graphics – both in panel 1 as well as the overall graphic.

These are just some examples of how helpful scientists are in explaining their sometimes very complex science. Via these exchanges we’ve also gained a lot of appreciation for just how much “background work” goes on before scientists get to the end result we often present in our rebuttals and blog posts. So for example, the end result finding that CO2 levels rose and fell during the ice ages is founded on a huge amount of “under the hood work” about how snow turns to ice, the chemistry and physics of all that, the details that go into accurately dating the cores, etc. There is a huge depth of detailed scholarship supporting all of it. It is quite remarkable. We really appreciate that the scientists take the time to share these details of their work with us!

Building a corn cob; cell by cell, gene by gene

Scientists identify flank instability at a volcano with history of collapse