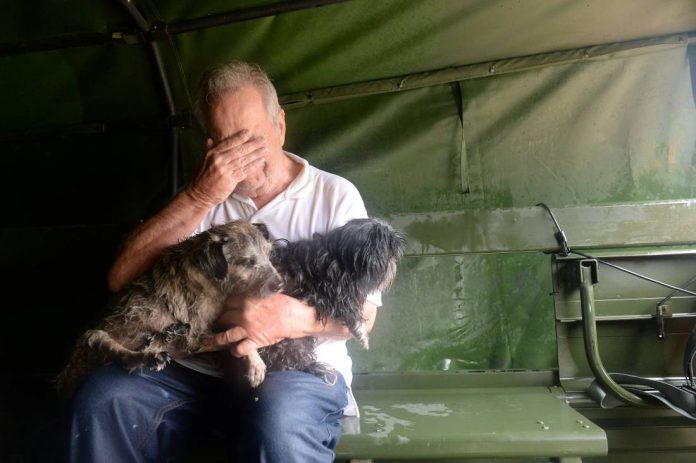 2017 may be the most costly year for disaster losses – and insurance may become “unaffordable” in some places, experts say

LONDON, Nov 21 (Thomson Reuters Foundation) – With its string of hurricanes, floods and other weather shocks, 2017 may be the most expensive year on record for disaster losses, insurance experts warned on Tuesday.

Over the last decade, only 30 percent of catastrophic disaster losses were insured, leaving governments, businesses and others to pick up the remaining $1.7 trillion tab, noted Swiss Re, the world’s second-largest reinsurer and a member of ClimateWise.

The growing gap between the amount insured and actual losses is a threat not just to owners of sodden homes, wind-flattened businesses and governments facing ballooning recovery bills, but even to the insurance industry itself, the network warned in a report.

The last six months of the year have been “exceptionally expensive” for the insurance industry, said Tom Herbstein, director of ClimateWise, which is facilitated by the UK-based Cambridge Institute for Sustainability Leadership.

As costs related to climate change surge, “insurance is going through probably the most profound challenge it’s faced yet”, he told the Thomson Reuters Foundation.

Insurers set policy costs assuming risks in the future will be like those in the past – and if losses prove bigger than expected, they boost their prices, he said.

“The problem is that if you keep repricing risk in a world where exposure to risk is growing exponentially, you eventually reach a point where the cost of insurance is too high,” he said.

As losses from weather disasters rocket and insurance rates follow, insurers are “ultimately shooting themselves in the foot”. “They’re repricing themselves out of the market,” he added.

That is bad news not just for companies but for the people and governments in need of policies to cope with growing losses.

A mechanism that is part of the Paris climate change agreement has viewed insurance as a primary way of dealing with the soaring “loss and damage” poor countries are suffering from wilder weather.

But “the cost of extending sustainable insurance cover is now simply not affordable in many places”, noted Maurice Tulloch of insurance firm Aviva in the ClimateWise report.

The rising cost of insurance is driving some would-be buyers instead to try to adapt to changing climate conditions and reduce their risks, the experts said.

Farmers, for instance, are beginning to use more flood-resistant or drought-tolerant crops, pay attention to long-term forecasts, and diversify their production, sometimes by buying land in different areas, Herbstein said.

Cities – where more than half of people now live – also can cut their potential losses by building infrastructure that is better able to withstand the new risks.

“The only solution to reduce the protection gap is to help society become more physically resilient to the risks”, Herbstein said. Doing so can also lower the cost of insurance.

Banks can play a key role in that transition, he said, by assessing climate risks more accurately in their lending. That might mean backing housing or commercial projects that are better protected from floods, for example, over riskier schemes.

Organisations such as the Task Force on Climate-related Financial Disclosures, which aims to make businesses and their investors better aware of climate change-related risks, can also contribute, Herbstein said.

Insurance firms are among the most advanced in being able to disclose such risks to investors, given their long experience of calculating risk, and can help guide others, he said.

Appetite for identifying risks is “growing tremendously” across the board, he noted.

“The response is not being driven by the need to be seen as doing the right thing. It’s increasingly being driven by … the business case,” he added. (Reporting by Laurie Goering @lauriegoering; editing by Megan Rowling; Please credit the Thomson Reuters Foundation, the charitable arm of Thomson Reuters, that covers humanitarian news, climate change, resilience, women’s rights, trafficking and property rights. Visit http://news.trust.org/climate)