Failure to disclose emissions details will put Irish companies at a competitive disadvantage as desire for climate action grows for investors, customers and employees, a new business report has found.

CPD
Ireland’s Climate Change Report 2019 found that companies operating in Ireland
had reduced carbon emissions by 11 per cent from levels recorded in 2018.

The CDP is an international not-for-profit that provides a global platform for companies to self-report and share data on their ecological and climate footprint. The process is backed by both the EPA and SEAI.

In 2019, a total of 274 companies reported to the CDP Climate Change programme that are either headquartered or operating in Ireland, including 31 of 80 Irish member companies.

Just over two-thirds of the Irish
companies studied for the report have gone beyond the global business average,
with 67 per cent of the obtaining an “A” or “B” grade according to CPD. Just
under half of the 8,400 global companies in the report met the same
standard.

Many
companies failed to provide a response, including Applegreen, Paddy Power
Betfair, Permanent TSB and Ryanair Holdings.Earlier this
month, Ryanair was sanctioned by the Advertising Standards Authority
(ASA) in the UK for presenting misleading claims to the public about its
emissions.

In
response to the ruling, a company spokesperson told The Green News that,
“the single most important thing any consumer can do to halve their carbon
footprint is to switch to Ryanair”.

Corporate action alone is “not enough”

While
acknowledging that 2019 was a year of “heightened focus” on climate change, CDP
Executive Director Brian O’ Kennedy said that it was also a year in which “companies
in Ireland did more to address these challenges”.

However, Mr Simpson noted that “growing corporate action is not enough” and that governments must “urgently step up their ambition to give business the clarity and confidence they need to invest in the zero-carbon future”.

To date, Ireland has been one of Europe’s worst climate action performers, frequently finding itself at the bottom of the Climate Change Performance Index.

Most recently, the Sustainable Progress Index for 2020 found that Ireland is considerably behind on its green commitment under the UN Sustainable Development Goals, coming in last in the environmental category out of 15 European countries.

Overall, Ireland ranked 10th out of 15 comparable EU Countries, coming in last alongside Greece, Portugal, and Spain in this year’s report commissioned by Social Justice Ireland. 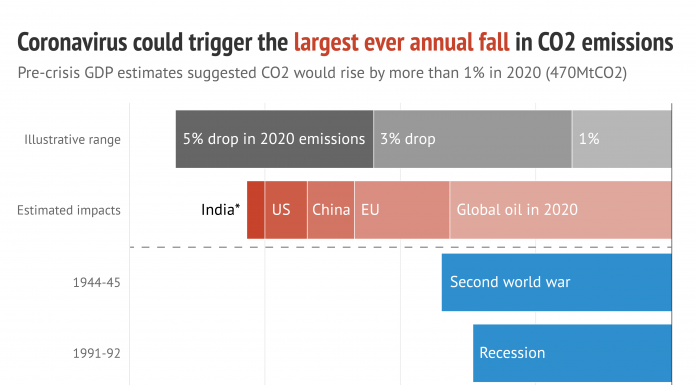 Analysis: Coronavirus set to cause largest ever annual fall in CO2 emissions