Over 50 Irish scientists and academics have signed an open letter supporting the climate strike movement and students “justified” concerns over the threat posed by climate change.

The letter was released last night on the eve of a national school strike taking place today as part of the global Fridays for Futures movement.

There are strikes and rallies planned for at least 15 towns and cities across Ireland, including Dublin, Cork and Galway, and Kilkenny.

A previous strike in March drew in around 15,000 students across the country calling on the Government to adopt effective climate legislation.

The Scientists For Future
Ireland letter – signed by academics across nine universities – states that
the students concerns are both “justified and supported” by scientific
evidence.

“Without bold and focused action, their future is in critical
danger,” the letter warns, adding that many social, technological, and
nature-based solutions already exist to tackle the crisis.

‘No time to wait’

“The young protesters rightfully demand that these solutions be used to achieve a sustainable society… There is no time to wait until they are in power,” the letter adds.  “We approve and support their demand for rapid and forceful action.”

The statement builds on the International Scientists For Future letter published in Science in April that called on scientists and scholars across all disciplines to support the climate protesters.

The Irish letter endorses the international call and also outlines support for the demands of Irish students determined by the Schools Climate Action Network (SCAN).

In March, the students presented six key demands to TDs and senators based on a survey sent to students across the country, including a ban on new fossil fuel projects and reform of the education systems to address the need for ecological and climate literacy.

The rapid implementation of the Citizens’ Assembly recommendations on climate action is also demanded, as well as policy changes to bring in a Green New Deal and to ensure a reduction in agricultural emissions. 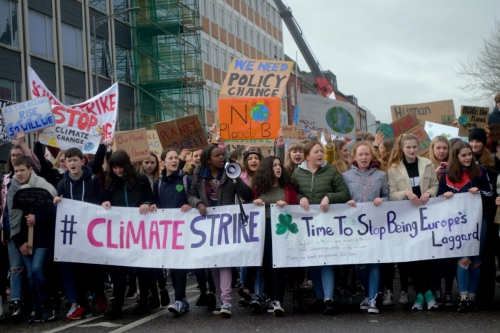 Both Prof Davies and Dr Torney sat on the Expert Advisory Group to
the Citizens’ Assembly for its discussion on climate action.

While offering support to students “speaking truth to power”, Dr
Torney said that the letter also offers a strong rejoinder to commentators who
have “cast doubt” on the movement.

“As academics we have a role to play by confirming that [the
students] are indeed speaking the truth, which they undoubtedly are,” he said.

Numerous other DCU academics signed the letter, including Dr Laura
Devaney who said that the school movement has had a “huge part to play” in
bringing wider attention to the climate crisis.

“The message is even more poignant coming from the generation that
will be most impacted by the political decisions and societal actions taken
today,” she added.

Finding
the answers or solutions to the crisis should not fall on young people who are already
doing their fair share by taking to the streets, according to Louise
Fitzgerald, a researcher at University College Dublin who drafted the Irish
letter.

“Those of us analysing the climate science… we are coming out to
say that the students are correct, they are telling the truth, urgent action is
needed and theirs is a measured response,” she added.

“Scientists have been sounding the alarm for decades, youth climate strikers have managed to finally get that alarm heard. It’s now time for the scientists, in turn, to stand in solidarity with the youth.”

The letter outlines the critical need to “immediately begin a rapid reduction in CO2” and other greenhouse gases in order to “limit the damage” that is coming our way.

While some politicians and commentators have argued that Ireland’s emissions are minuscule in the global context, the letter is clear that the climate crisis facing humanity “will be determined by our cumulative emissions”.

“Considering
that industrialized countries produced more of and benefited more from previous
emissions, they have an ethical responsibility to achieve this transition more
quickly than the world as a whole,” the letter adds.

“Only if humanity acts quickly and resolutely can we limit global warming, halt the ongoing mass extinction of animal and plant species, and preserve the natural basis for the food supply and well-being of present and future generations.”

Leading scholars and researchers on biodiversity also signed the letter such as Prof Jane Stout of Trinity College Dublin and Dr Shane Regan from the National Parks and Wildlife Service.