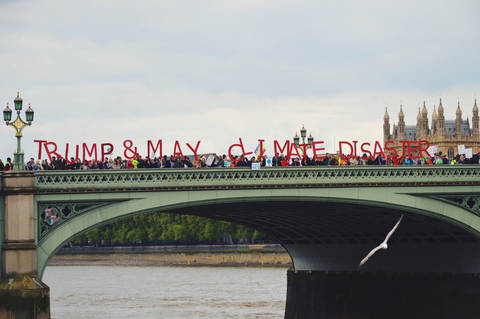 The streets of London were awash with a jumble of giant red letters today, as they made their way to Westminster Bridge to send a very important message to two of the world’s most powerful leaders.

As hundreds of people weaved their way carefully through crowds of tourists, onlookers could only attempt to work out what the letters might possibly mean. After a spontaneous eruption of chanting – which made the bunch seem like a group several times its size – the letters soon assembled in their rightful order so that even those far down the Southbank could not mistake their message.

Raised defiantly in the air, the letters read: “TRUMP AND MAY CLIMATE DISASTER.”