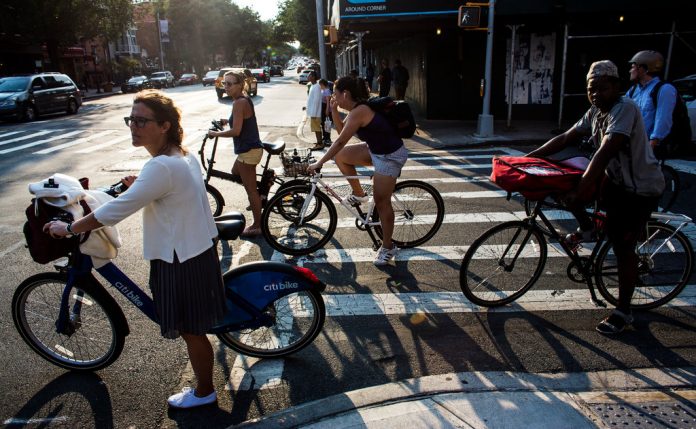 The two-wheelers glide down a bike lane on Hoyt Street, which links Downtown Brooklyn with thriving brownstone-lined neighborhoods. There are so many bikes during the evening rush that they pack together at red lights and spill out in front of cars.

It is the kind of bike hegemony that was once hard to imagine in New York City, where cars and taxis long claimed the streets and only hardened cyclists braved the chaotic traffic.

“New York has really become a biking world,” said Jace Rivera, 42, a former construction worker who so enjoyed riding his bike to work that he changed careers last year to become a bike messenger. “The city has gotten a lot more crowded, and the trains have gotten a lot more expensive. By biking, you spare yourself the crowds, you save a lot of money, and you can go to work on time.”

Biking has become part of New York’s commuting infrastructure as bike routes have been expanded and a fleet of 10,000 Citi Bikes has been deployed to more than 600 locations. Today there are more than 450,000 daily bike trips in the city, up from 170,000 in 2005, an increase that has outpaced population and employment growth, according to city officials. About one in five bike trips is by a commuter.

Tim Weng, 30, a nurse, traded the subway for a bike after train delays kept making him late for work. It takes just 25 minutes to bike to his job, compared with an hour on two trains. He bought a second bike as a spare. “Now that I have a bike, I go places more often because it’s more convenient,” he said.

Citi Bike alone accounted for a record 70,286 trips last Wednesday, which the program called “the highest single-day ridership of any system in the Western world outside of Paris.” The bike-sharing system in New York has signed up 130,000 riders for annual memberships, up from nearly 100,000 last year.

Still, the surging bike culture has intensified a “bikelash” among some community leaders and residents, who say boorish cyclists speed and run red lights, text while riding, cross onto sidewalks and go the wrong way on streets. Bike lanes and Citi Bike docking stations, critics say, take away space for parking and deliveries and hinder traffic on already-clogged streets.

In the past two years, proposals to add bike lanes in Manhattan and Queens have drawn opposition from residents. In an email to the community board on the Upper East Side of Manhattan, Woody Allen, who lives in the neighborhood, said that while he was in favor of encouraging bicycling, “unfortunately the situation has gotten off to an unregulated start and is out of control.” The bike lane was built on his street anyway.

Daniel Kayton, a real estate broker, walked alongside a bike lane on First Avenue all the way from the East Village to Harlem last year to conduct an informal survey of whether it had harmed businesses and endangered pedestrians. The answer was a resounding yes, he said. “You’re turning Manhattan upside down and inside out to accommodate a handful of bicyclists and activists,” he said. “Ride your bikes, enjoy your life, but leave the rest of us alone.”

Polly Trottenberg, the city’s transportation commissioner, said that while her agency was sensitive to such concerns and had tried to minimize disruptions, expanding the biking infrastructure was vital to keeping pace with the soaring population. “We can’t continue to accommodate a lot of the growth with cars,” she said. “We need to turn to the most efficient modes, that is, transit, cycling and walking. Our street capacity is fixed.”

New York is part of a booming bike movement across the country, as cities recognize the importance of biking to their transportation systems, invest in bike infrastructure and improve the safety of bike routes, said Matthew J. Roe, a program director for the National Association of City Transportation Officials.

More than a hundred cities have created protected lanes that place buffers between bicycles and cars, like ones lined with self-watering planters in Seattle. In New York City, bike lanes have been created between curbs and parking spots — a model that has been widely copied elsewhere.

Chicago has a sprawling network of bike routes, including a stretch over an abandoned railroad line that was repurposed as a trail. The city’s bike-share system, Divvy, has more than 6,000 bikes and covers 100 square miles, the largest area in the country.

Los Angeles has 796 miles of bike lanes, up from 545 miles five years ago. It has turned one downtown street into a laboratory for bike safety experiments, testing signal lights just for bike lanes and painted-green bike boxes near busy intersections that give riders a place to wait before making left-hand turns.

Portland’s 370 miles of bike routes include “neighborhood greenways” that give priority to bicyclists on local streets by lowering the speed limit to 20 miles per hour and strategically placing bollards to divert car traffic. In addition, the city began requiring protected bike lanes to be built on streets adjacent to new buildings.

New York City, in fact, developed the first bike path in the country in 1894 on Ocean Parkway, in Brooklyn. And in 1980, Mayor Edward I. Koch installed the city’s first modern protected bike lanes in Midtown Manhattan, only to rip them out shortly afterward because they failed to get a warm reception. In 1987 he moved to bar bicyclists on sections of Park, Madison and Fifth Avenues during weekday business hours amid concerns over reckless riding by bike messengers.

Paul Steely White, the executive director of Transportation Alternatives, an advocacy group, recalled that cyclists were often treated as second-class citizens and had to fight for what little space they could claim on the streets.

“In the not-so-distant past, you did have to be a little insane to ride your bike,” he said. “You were called a zealot, an iconoclast or an early adopter.”

Though bike commuters remain just a small fraction of all commuters, New York now has more bike commuters than any other American city, according to an analysis of census data by the League of American Bicyclists. There were 46,057 commuters who primarily biked to work in 2015, or more than double the 16,468 in 2005.

Despite efforts to protect cyclists, biking remains perilous. In June, a 36-year-old investment banker riding a Citi Bike to work in Manhattan was killed in a collision with a charter bus, the first fatality involving the bike-share program.

Nevertheless, a new city report shows that biking has become safer over all. The average rate of cyclists killed or severely injured in crashes with motor vehicles has significantly declined as bike ridership has surged. In 2016, there were 18 cyclist fatalities.

The report identified 10 areas in Brooklyn and Queens with relatively little bike infrastructure and high numbers of fatalities and severe injuries as “priority bicycle districts.” City transportation officials said they would build, or improve, a total of 75 miles of bike lanes in those areas in the next five years.

On Hoyt Street, the bicycle crowd squeezes into a one-way bike lane that is nearly as wide as the car lane beside it. On a recent evening, 442 bikes — compared with 331 cars — passed by in one hour, more than three times the 141 bikes counted in the same hour in 2011, according to city data. Two years ago, cars still dominated.

Jennifer Golum, 27, of Brooklyn, said she had started biking to work this spring because of subway delays and also to save money and to get some exercise. She uses Hoyt Street, she said, because she feels safer riding with other cyclists.

“It’s easier for cars to notice when there’s a group of bikers so they don’t turn quickly, and you’re not hidden in their blind spot,” she said.

Some nearby residents said they were glad to see so much more biking in the city, even though it has brought more congestion and noise to their doorsteps.

“Rush hour is bad here,” said Jim Kerby, 63, a real estate broker, who often rides a Citi Bike to work. “But it would be so much worse if the bikers were in cars.”