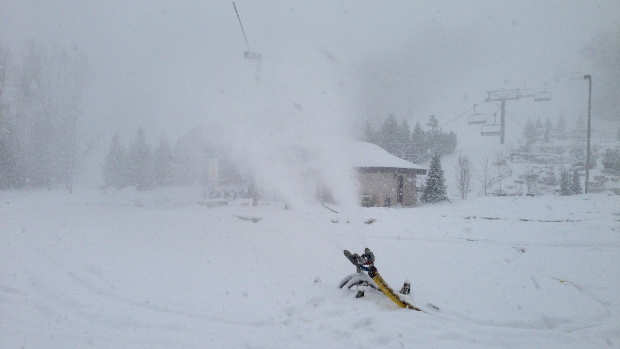 More and more ski hills are turning to technology to keep snow on the ground.

Environment Canada climate data shows a trend of more freeze/thaw cycles and fewer days when the temperature stays below the freezing mark when compared to winters 30 years ago.

“Although we are seeing the same length winter, we are seeing snow -making windows that are smaller or they come and go quicker,” says Tara Lovell, a spokesperson for Blue Mountain Resort.

Data also shows slightly more snowfall in the Georgian Bay region because of the lake effect, but resorts still need to make their own. Fine-tuned water nozzles help makes snow at warmer temperatures.

“Around -3, wet bulb, which we couldn’t do 10, 15 years ago. It also reduces our energy consumption with electricity,” says John Ball, a spokesperson for Snow Valley.

Resorts are also spending millions to expand their snowmaking capacity.

“What we have done is double our water capacity so when we do get those cold temperatures, whether it be five to 10 days, we can continue blowing snow without running out of water,” says Jonathan Reid, general manager at Horseshoe Resort.

“Sometimes a snowmaking window is only a few more hours. With automation we can turn on snow guns with a push of a button, which means we can take advantage of those snow making windows,” Lovell says.

After several substantial temperature swings this month it’s hard to guess what resorts will face this winter.

Environment Canada will release its winter forecast later this week.