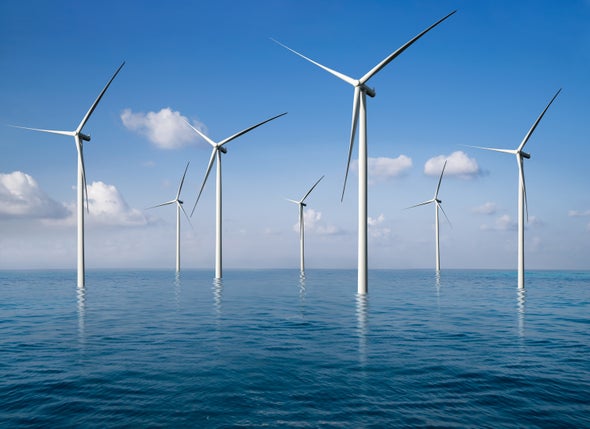 On January 21, 2021 a new paper (Williams et al. 2021) was published that claims that an energy system can provide 100% carbon free energy to power the entire economy of the USA economically.  This paper describes how to build an energy system that provides all energy to the economy and releases no carbon into the atmosphere by 2050.   This conclusion is similar to Jacobson et al. 2018  (Jacobson et al 2015 at SkS) and Connelly et al. 2016 previously described here at SkS.  Williams et al modeled eight different scenarios representing slightly different pathways to reach net zero and net negative CO2 emissions by 2050.  The cheapest option uses some fossil fuels with carbon capture and storage (CCS) and has a small amount of nuclear power.  A completely renewable energy system with no fossil fuels or nuclear is slightly more expensive.  Building a comparable system for other countries would be similar.

“We created multiple blueprints for the United States to reach zero or negative CO2 emissions from the energy system by 2050 to avoid the most damaging impacts of climate change. By methodically increasing energy efficiency, switching to electric technologies, utilizing clean electricity (especially wind and solar power), and deploying a small amount of carbon capture technology, the United States can reach zero emissions without requiring changes to behavior. Cost is about $1 per person per day, not counting climate benefits; this is significantly less than estimates from a few years ago because of recent technology progress.”

This is an important paper because the group that published the paper has previously concluded that it was not economic to have a completely renewable energy system that released no carbon into the atmosphere. (Williams et al. 2019).  They previously thought that nuclear power or large amounts of fossil fuels with carbon capture and storage (CCS) would be required.  Because of the dramatic decrease in the cost of wind and solar energy they now conclude that a system with 100% renewable energy would be possible.  Their cheapest scenario contains a small amount of nuclear and some fossil fuel with CCS.

Here is the press release from the Lawrence Berkeley National Laboratory describing the paper and a summary from Science Daily .  In this OP I will describe the most important conclusions that need to be acted on and the policy choices that concerned citizens (like those at SkS) should support.

1)    A complete energy system for the US economy can be built economically by 2050 that releases no CO2 to the atmosphere.  The primary energy sources will be wind and solar electricity.

These key steps will be the most important items until about 2035.  This will electrify about 80% of the economy.  The last 20% of the economy is the hardest and is where different pathways can be considered.

Actions that concerned citizens should support:

1)    Support rapid construction of wind and solar systems.  Policy items like the production tax credit and making it easier to obtain construction permits will allow faster construction of these systems.  Encouraging home and commercial rooftop solar systems adds generation capacity.  Support for building transmission lines where needed.  Williams et al 2021 find that wind from the Midwest can be used nationally while solar power is cheaper to generate locally.

3) Convert all heating and cooling to electric heat pumps.  Air conditioners are electric heat pumps.  Added valves allow them to also be used for heating.  My house in Florida has a heater/cooling heat pump.  Heat pumps can add approximately three times as much heat for a given energy input than chemical furnaces or electrical resistance heaters.   Converting to heat pumps dramatically reduces total energy use compared to chemical heaters or electrical resistance heaters.   This reduces overall system costs. Heat pumps cost more than furnaces so people are resistant to installing.  Heat pumps save money in the long run because they use so much less energy.

4) Stop all new connections to fossil fuel heaters.  Many heaters in the USA use heating oil or natural gas.  All new installations and replacements of existing units should install electric heat pumps.  This saves consumers money in the long run but people object to the expense up front.  Especially after 2035 oil and gas prices should be increasing to encourage heat pump use.  Installing heat pumps now prevents replacing furnaces later before they have been fully used.

6)    Existing methane generators have about the expected capacity needed to provide backup power on windless nights in the future.  Policies should not encourage shutting down methane powered generating plants.  Coal plants should be shut down.

Decisions like how to electrify the last, hardest 20% of the economy and whether to use biofuels, electrofuels or just electricity do not need to be made at this time.  More research can be done to determine the best path.  Changing future costs will also determine the most cost effective path.  Some amount of carbon capture is required in all scenarios.

This conclusion is similar to Connelly et al 2016.  Jacobson et al 2018 does not use biofuels (he thinks it causes too much pollution) and is more stringent than Williams et al 2021.  The conclusions of what is best to do for the next ten years is similar for all these papers.  That is to build out wind and solar generation as fast as possible.  The amounts of each can be determined economically (build whatever is cheapest).

The most costly scenario was where there was slow uptake of heat pumps and efficient buildings. This lead to greater demand for energy and much more wind and solar generators.  The cost of all the scenarios was 0.2% to 1.2% of GDP.  The cheapest scenario (0.2% of GDP) was one with low renewable energy cost (future cost of all technologies has to be estimated).  100% renewable energy was slightly more costly than the central scenario (.9% of GDP for 100% renewable to 0.4% of GDP for central).

After 2050, when the system would be built, the cost of energy in the economy in all scenarios would be less than the average cost of energy for the past 60 years.  In addition, no money would be spent importing oil and other energy from overseas.

Infrastructure transition in the ‘Central Scenario’ illustrating the change-over to a net-zero energy system for a) electric power generating capacity, b) vehicles, and c) space and water heating. (Figure 4 from Williams et al. 2021)

Hat tip to Nigelj for bringing this article to my attention.