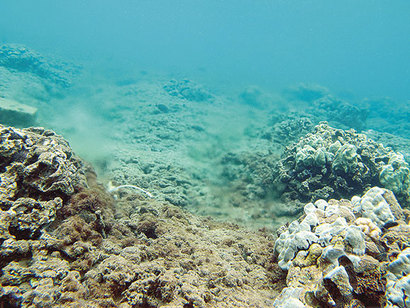 The new study, accepted for publication in the Journal of Geophysical Research: Oceans, a journal of the American Geophysical Union, finds local land-based pollution can make coral reefs even more vulnerable to ocean acidification by magnifying its effects.

Next week, the Lahaina News will feature an article with the County of Maui’s response to the study, current treated wastewater injection/ reclamation rates, future plans for the facility and the source of foul odors emanating from the plant along Honoapiilani Highway.

Recent research has highlighted how individual local stressors like overfishing and nutrient runoff can independently impact corals from the Florida Keys to the Great Barrier Reef.

The new research emphasizes how coral reefs adjacent to densely populated shorelines are particularly vulnerable to the effects of ocean acidification amplified by local pollution.

“What we’ve shown here is that reducing any stressors at a local scale is critical to coral reef health, particularly when local stressors interact with changing ocean conditions on a global scale,” said Nancy Prouty, a research oceanographer at the U.S. Geological Survey’s Pacific Coastal and Marine Science Center in Santa Cruz, California and lead author of the study.

If coral reefs erode faster than they can grow, they will be less able to protect coastal communities from hazardous storms and waves, especially if sea levels keep rising, according to Nyssa Silbiger, a marine biologist at California State University in Northridge, California, who was not involved with the study.

“This is a very important and potentially frightening result,” Silbiger said. “If bioerosion rates exceed accretion (or reef growth) rates, then coral reefs will not be able to keep up with sea level rise.”

Coral reef health has been a concern in West Maui, where reefs are exposed to freshwater that flows underground from the island to the seafloor.

This process, submarine groundwater discharge, is natural and has been occurring in Maui for decades. However, this discharge system caused concern when the West Maui facility began injecting treated wastewater deep underground.

In 2013, scientists revealed that the facility’s acidic, nutrient-rich water eventually makes its way to the sea through submarine groundwater discharge.

Nutrient-enriched seawater can trigger algal blooms. The algae become a feeding ground for bacteria, sponges and bivalves. While eating the algae, these organisms often burrow into coral skeletons and erode coral exteriors, a process known as bioerosion.

Bioerosion is a natural process that modulates coral growth, but excessive nutrient levels can throw the system out of balance, causing corals to erode faster than they can develop.

The facility’s acidic wastewater can disrupt coral reef growth as well. Corals form by calcification, in which they use the calcium and carbonate ions in the ocean to build their calcium carbonate skeleton.

Under optimal conditions, the ocean is saturated with both ions. But when the seawater’s pH lowers, the newly free hydrogen ions trap carbonate ions in the form of carbonic acid, reducing the number of calcium-bonding carbonate ions available. In severe situations, calcium carbonate structures start to dissolve to make up for the ocean’s depleted carbonate stock.

In the new study, Prouty and her colleagues examined how low pH and high nutrient conditions from the treated wastewater influenced West Maui coral reefs.

They collected seven core samples from corals growing by the Kahekili seashore in West Maui at varying distances from groundwater-discharging seeps on the seafloor. The researchers assessed coral growth and bioerosion by generating 3-D images of the cores with computerized axial tomography (CAT) scan technology, similar to CAT scan machinery found in hospitals.

The researchers found seawater closer to the groundwater-leaking seeps had a lower pH, less carbonate available and nitrate levels 50 times higher than seawater farther from the seep site.

Accordingly, the corals closer to the seeps grew slower and exhibited more bioerosion compared to corals situated farther from the seep sites.

These corals were noticeably pitted and riddled with holes – a sign that algae-hungry creatures had excavated into the coral skeleton.

If this process continues, local problems can become an additional burden to coral systems already stressed from ocean acidification occurring due to increased carbon dioxide in the atmosphere, they said.

“Think about it as if you’re tired and you’re run down, and then you get a cold,” Prouty said. “There might not be one trigger, but all the stressors acting together cause an accelerated response.”

The bright side to local problems is the potential for local solutions. From managing local stressors, communities have a better chance of sustaining future coral reef ecosystems and planning for resiliency, Prouty said.

“When we talk about global stressors, it’s hard to take action at the local level and see if you’re having an impact,” Prouty said. “So focusing on local stressors is also important for making a change.”

(Olivia Trani is a public information intern at the American Geophysical Union.)