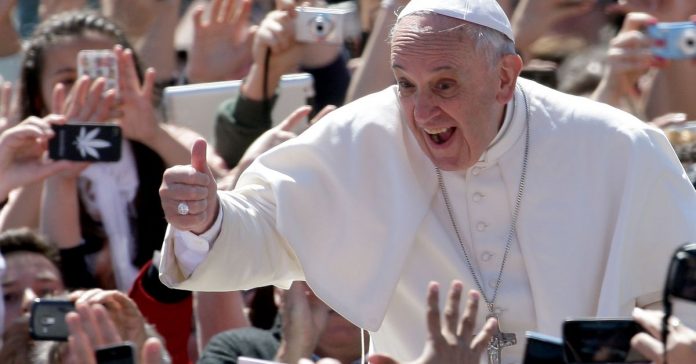 As Hurricane Irma, a tempest exacerbated by climate change, ravaged the Florida coast on Monday as a tropical storm, Pope Francis doubled down on his condemnations of those who choose to ignore the mounting evidence of the impacts of global warming.

Responding to questions from an Italian journalist on board his flight home from Colombia, Francis said that the halting response to climate change reminded him of a “phrase from the Old Testament — man is a fool, a stubborn man who will not see”: an apparent reference to Proverbs 12, a section of the Bible that condemns those who resist correction in matters of knowledge.

Later, he added in a more pointed jab at climate deniers: “Anyone who denies [climate change] should go to the scientists and ask them. They speak very clearly … climate change is having an effect, and scientists are telling us which path to follow. And we have a responsibility — all of us. Everyone, great or small, has a moral responsibility … we must take it seriously … history will judge our decision.”

His words were direct, but hardly new. Earlier this month, Francis released a joint statement with Eastern Orthodox Patriarch Bartholomew condemning apathy toward environmental issues, criticizing “[our current] morally decaying scenario where our attitude and behavior toward creation obscures our calling as God’s co-operators.”

In that statement, Francis echoed several themes of his papacy, including his deep suspicion of unbridled capitalism and its role in harming the environment, saying: “Our propensity to interrupt the world’s delicate and balanced ecosystems, our insatiable desire to manipulate and control the planet’s limited resources, and our greed for limitless profit in markets — all these have alienated us from the original purpose of creation. We no longer respect nature as a shared gift; instead, we regard it as a private possession. We no longer associate with nature in order to sustain it; instead, we lord over it to support our own constructs.”

Francis’s most visible contribution to the climate change debate was his 2015 encyclical on the environment, Laudato Sì. The encyclical received a great deal of media attention for a church document — as I wrote previously, the United Nations’ chief climate change official, Christiana Figueres, called it a “clarion call” for change — and many Catholics, including CAFOD’s UK news officer Liam Finn, celebrated it as a sign of Francis’s ability to make Vatican documents the subject of international media coverage. However, its actual effect on average Catholics is debatable. An Annenberg Public Policy Center Survey found that the pope’s attention to the issue did little to change Catholics’ minds, with more conservative Catholics — only 24 percent of Catholic Republicans believe in climate change — “devalu[ing] the Pope’s authority” as a result of his words.

That study’s findings reflect a broader trend in global Catholicism, whereby more conservative Catholics have expressed frustration with a pope they see as allied to an unfavorably political progressivist strain within the church. (On the extreme end of that trend: former Trump adviser Steve Bannon — who is Catholic — told CBS’s 60 Minutes that Catholic bishops only opposed Trump’s ending of the Deferred Action for Childhood Arrivals program because they “needed illegal aliens to fill the churches.”)

During his Monday press conference, Francis also criticized the president on DACA, saying that Trump “presents himself as somebody who is pro-life. If he is a true pro-life man, he understands that the family is the cradle of life, and that he must safeguard its unity.”

ClimateHome climatechange - November 16, 2017
0
Global civil society organizations are calling for a tax on fossil fuel supplies to fund support to people hit by climate change impacts. Polluters should pay for...

Climate Change climatechange - January 3, 2019
0
One would assume that since humans and many animals tend to get stiffer and perhaps tougher as they reach adulthood, the same would be...