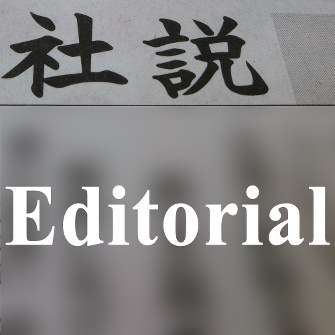 It has been nearly six years since the triple-meltdown at the Fukushima No. 1 nuclear plant. Two things seem symbolic of this time: the simultaneous lifting of evacuation orders for the Fukushima Prefecture village of Iitate and other nearby communities, and the recent glimpse of what appears to be melted nuclear fuel in the plant’s No. 2 reactor.

One is significant for all those residents who had no idea when they would be able to return to their hometowns, and the other for how much we understand of what is going on inside the stricken Fukushima No. 1 plant reactors, which until recently had been very nearly nothing. Considering how things were going before, these developments can be considered a step in the right direction.

However, if we take a cold, hard look at the situation, there are facts that must be seen as equally representative of the current reality: that the disaster has stolen so much from so many, and that real recovery will be a decades-long struggle with reconstruction and plant decommissioning.

Any visitor to the Fukushima plant will get a keen sense of how demanding the work is to dismantle its ruined reactors. The area where full face masks are required has been significantly reduced, and working conditions have certainly been improved. However, there is still no target for removing the melted nuclear fuel from the reactors — the greatest challenge to decommissioning — and no prospect for setting one.

Last month, plant operator Tokyo Electric Power Co. (TEPCO) inserted a “scorpion” robot into the No. 2 reactor containment vessel, and tried to steer it to a spot right under the core. However, its path was blocked by piles of dark material, and in the end the robot was unable to determine the state of the reactor’s nuclear fuel.

There are more than 800 workers at the Fukushima plant. Some have been exposed to excessive radiation due to unexpected tasks. They are barred from working inside the reactor buildings, where radiation is extremely high, and absorb higher doses just by getting near them.

Nevertheless, the state of the nuclear fuel in each reactor must be ascertained, and a plan must be devised to remove it.

The No. 1 and 3 reactors are thought to be in worse shape than the No. 2 reactor. The government and TEPCO are aiming to extract the fuel from all the reactors starting in 2021, but that is wildly optimistic. A drastic rethink of the entire decommissioning strategy and schedule — including the development of the robots that will take on much of the work — is likely needed.

The burdens placed on Japanese society by the nuclear disaster include the swelling financial cost of dealing with its aftermath.

The Ministry of Economy, Trade and Industry says that reactor decommissioning, victim compensation, decontamination and other nuclear disaster-related costs will hit 21.5 trillion yen — twice the initial estimate. However, even this figure does not include the cost of disposing of the melted nuclear fuel among other expenses, and is thus certain to rise.

We also cannot overlook the creation of a new system to charge third-party power suppliers to cover part of the compensation costs — a charge the power supply companies will pass on to their customers, thus effectively making a wide swath of Japanese society pay for TEPCO’s compensation liabilities. There are also apparently plans to implement a similar system to cover the decommissioning costs for Japan’s aged reactors.

It has been less than a year since the power supply market was opened to competition. Making not just the big utilities but also the new third-party electricity suppliers with no connection whatsoever to the nuclear power business pay for reactor decommissioning is a blow to the very heart of electricity market liberalization. The government’s insistence that “nuclear power is comparatively cheap even including accident countermeasure costs” no longer holds water.

If the government is to demand the Japanese people take on this financial burden, it must admit that the “cheap nuclear power” line doesn’t match the facts, and reroute Japan’s power generation plan to a nuclear-free future.

Looking at the harsh realities of dealing with the Fukushima nuclear disaster, we cannot consent to the ongoing string of reactor restarts. Utilities have applied to the Nuclear Regulation Authority (NRA) to restart 26 reactors at 16 plants under standards drawn up in the wake of the March 2011 Fukushima meltdowns. Just three reactors have been put back on line so far, but 12 more at six plants have or are expected to pass NRA inspections. Among them are three reactors that have been in operation for 40-plus years.

A majority of Japanese citizens are opposed to the restarts, conflicting with the government’s evident enthusiasm for getting reactors back on line despite its stated goal of reducing dependence on nuclear power.

Over the past six years, we have learned that Japan would not run short of electricity if it abandoned nuclear power. A more deeply rooted argument in favour of nuclear generation is that it is needed to combat global warming.

Certainly, replacing nuclear plants with fossil fuel-driven power generation would increase carbon dioxide emissions. It is impossible to ignore the negative effect this would have on global warming.

Japan is obliged by international treaty to reduce its greenhouse gas emissions by 3.8 percent from 2005 levels by fiscal 2020. The country has already met that commitment even without nuclear power. Nevertheless, for Japan to strive for even greater reductions that it promised under the Paris Agreement, it must yet expand energy saving measures and renewable power generation.

Global investment in energy is shifting in force to renewables. According to the International Energy Agency (IAE), of the $420 billion U.S. invested in power generation in 2015, some $290 billion was put into renewables.

The prices of solar panels and wind turbines are falling fast, and offer a cheaper alternative to traditional thermal generation in an increasing number of cases.

The nuclear business is in decline in the developed world, as is evidenced by the deep troubles of Japan’s Toshiba Corp. and France’s Areva SA. At the same time, the renewable energy industry is growing by leaps and bounds.

If Japan shuts its eyes to this reality and continues to pour more of its resources into keeping nuclear power going than into renewable energy, it will likely be left behind by the rest of the world.

We have no choice but to carry the burden of the Fukushima nuclear disaster for decades to come. We will overcome this crisis, but we will need support.

To make sure we never have another nuclear disaster like the one in Fukushima, Japan should take the decision to abandon dependence on nuclear power. That would be the best support of all.

Research 341: Assessing the Potential of Drones to Take Water Samples and Physico-chemical Data from Open Lakes