The increased growth rate of plants seen worldwide in response to rising CO2 levels – a phenomenon known as “global greening” – could be stalled by growing water stress, a study finds.

Global warming is driving changes to water vapour levels, the research finds, which could, in turn, be affecting the rate of plant photosynthesis – the process underpinning plant growth.

The findings suggest that, in the future, the ability of plants to absorb the CO2 emitted by humans may be “substantially reduced”, the lead author tells Carbon Brief.

At present, the land takes in 30% of the greenhouse gases emitted by humans, according to a recent landmark report by the Intergovernmental Panel on Climate Change (IPCC).

The findings “do a credible job of bringing the increasing water stress on plants to the fore”, another plant scientist tells Carbon Brief.

Research using satellites and on-the-ground measurements shows that the world has been getting “greener”. That is, both the rate at which plants are growing and the amount of land covered by plants has increased since the start of the industrial revolution.

This “global greening” has been driven largely by rising CO2 levels in the atmosphere. Plants use CO2 during photosynthesis and so, as humans have emitted more and more CO2, plants have grown at an increasingly rapid rate.

Understanding what is driving global greening and how this could change is important because the phenomenon plays a key role in removing CO2 from the atmosphere.

The land currently absorbs around 30% of the greenhouse gases emitted by humans, according to the IPCC’s recent land report, with plants being responsible for the majority of this land carbon.

Previous research has suggested that, as CO2 levels rise, plant growth rates will continue to increase – meaning more carbon is taken up by the land with time.

For the study, the authors looked at a measure called the “vapour-pressure deficit” – or VPD.

“Basically, if the water potential is larger in the atmosphere – as in, if VPD is larger – water will dissipate faster and stronger from soil and plants.”

Plants react to higher VPD by closing their stomata – the pores plants use to absorb gases needed for photosynthesis – in order to prevent water loss, Yuan says. This causes them to conduct photosynthesis at a slower rate and, so, grow more slowly, he says.

Increased VPD also causes plants to dry out faster and thus can play a role in drought-related forest death, the study adds.

To explore how VPD has changed in recent decades, the authors analysed several global climate datasets. They looked specifically at VPD of areas with vegetation.

They found that VPD of vegetated areas has increased “strongly” since the late 1990s. The chart below, taken from the study, shows how VPD has increased from 1850 to present day. On the chart, colour is used to show the results from the different climate data sets.

Global mean vapour pressure deficit anomalies (VPD) of vegetated areas from 1850 to present day. Anomalies are relative to the mean of 1982-2015. Colour is used to show the results from the different climate data sets. Blue line and grey area illustrate the mean and standard deviation of VPD simulated by climate models using the scenario “RCP4.5”. Source: Yuan et al. (2019)

The authors also find that VPD of land with vegetation is likely to keep rising in the future.

The level at which water vapour in the air becomes saturated is rising as a result of warming temperatures, he explains. (This is because warmer air can hold more moisture.)

“Global warming can decrease wind speed, which, in turn, decreases the water evaporation from the ocean surface.”

This means that the deficit between the amount of water vapour in the air and the level at which water pressure in the air becomes saturated is growing ever larger as the climate changes, he says.

For the next part of the study, the authors used satellite data to observe how global plant growth rates have changed since the 1990s. 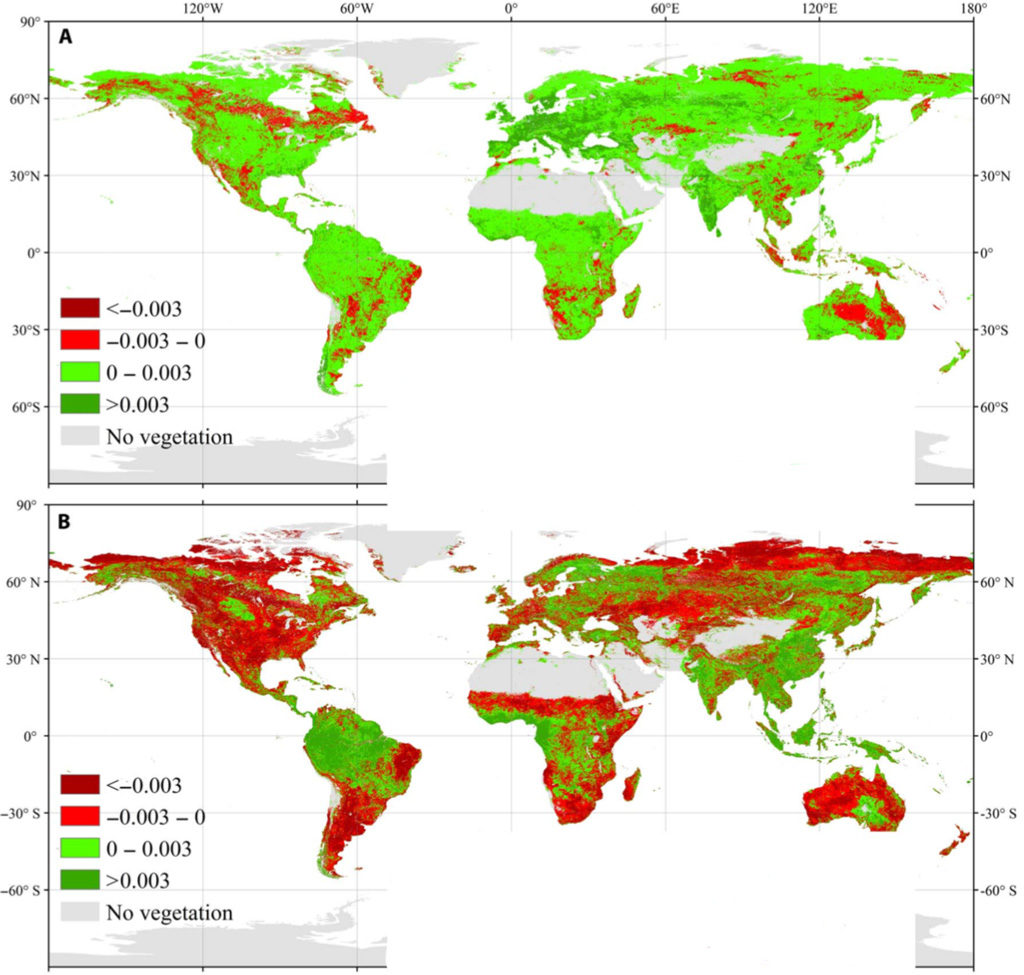 The maps indicate that there have been “persistent and widespread decreases” to the rate of greening since the late 1990s, the study says.

The researchers then used modelling to tease apart the factors that could have driven plant growth decreases since the late 1990s. Yuan says:

“The results show the increasing VPD since the late 1990s is a dominant cause for decreased vegetation growth.”

In the future, climate change is likely to cause VPD to increase further – which could have even larger impacts on the rate of plant growth, Yuan says:

“Decreased rates of vegetation growth will substantially reduce the ability of plants to absorb atmospheric CO2. The CO2 concentration in the atmosphere will increase, if other conditions did not change, which will result in a stronger greenhouse gas effect.”

Previous research has shown that the CO2 fertilisation effect could be further constrained by limits to soil nutrient availability. In particular, a lack of nitrogen and phosphorous could limit plant growth as CO2 levels rise.

“Our results find that VPD will continuously increase until the end of this century with climate warming and, therefore, the impacts of VPD will get more important.”

The findings highlight the threat that water stress poses to plants and, so, the land sink, says Prof Ranga Myneni, a researcher of global greening from Boston University, who was not involved in the study. He tells Carbon Brief:

“Water stress will lead to browning, especially in tropical and boreal forests. In the latter, such climatic changes encourage fires and insect outbreaks, which we have seen during the past 20 years. The authors do a credible job of bringing the increasing water stress on plants to the fore.”