This blog post is part 4 of a series of excerpts from The Debunking Handbook 2020 which can be downloaded here. The list of references is available here.

Simple corrections on their own are unlikely to fully unstick misinformation. Tagging something as questionable or from an untrustworthy source is not enough in the face of repeated exposures.

Debunking is more likely to be successful if you apply the following 3 or 4 components: 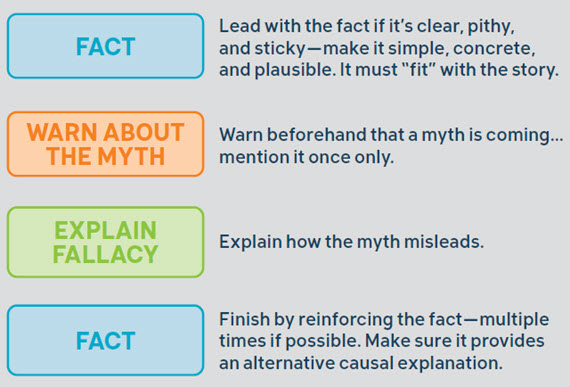 If it’s easy to do in a few clear words, state what is true first. This allows you to frame the message—you lead with your talking points, not someone else’s.

The best corrections are as prominent (in the headlines, not buried in questions) as the misinformation.

Do not rely on a simple retraction (“this claim is not true”).

Providing a factual alternative, that is an alternative that fills a causal “gap” in explaining what happened if the misinformation is corrected, is an effective method of debunking. Having a causal alternative facilitates “switching out” the inaccurate information in an individual’s initial understanding and replaces it with a new version of what happened.

The alternative should not be more complex and should have the same explanatory relevance as the original misinformation 1, 80, 81.

There may, however, be circumstances in which the facts are so nuanced that they escape pithy summary. In those cases, it may be better to lead with an explanation of why the myth is false before explaining the facts.

Repeat the misinformation, only once, directly prior to the correction. One repetition of the myth is beneficial to belief updating 27, 71, 82, 83.

But needless repetitions of the misinformation should be avoided: Although backfire effects are uncommon, we know that repetition makes information appear true 84, 85, 86.

Corrections are most successful if people are suspicious, or made to be suspicious, of the source or intent of the misinformation 87.

FALLACY: Explain why misinformation is wrong

Juxtapose the correction with the mistaken information. Ensure the rebuttal is clearly and saliently paired with the misinformation. It should be virtually impossible for the individual to ignore, overlook, or not notice the corrective element, even when skimming 27, 88, 89.

Rather than only stating that the misinformation is false, it is beneficial to provide details as to why. Explain (1) why the mistaken information was thought to be correct in the first place and (2) why it is now clear it is wrong and (3) why the alternative is correct 81, 90, 91. It is important for people to see the inconsistency in order to resolve it 71, 83.

Such detailed corrections promote sustained belief change over time and protect against belief regression (i.e., a return to pre-correction beliefs 2, 52, 92.

If possible, explain why the misinformation is wrong not only by providing a factual alternative but by pointing out logical or argumentative fallacies underlying the misinformation. A practical advantage of uncovering fallacies 66 is that they are not domain specific, and people can therefore benefit from the debunking in other content domains as well. Once you know that climate misinformation relies on cherrypicking 79 or incoherence 93, you may detect similar bad argumentation among anti-vaccination activists.

Restate the fact again, so the fact is the last thing people process.

Even with detailed refutations, the effects will wear off over time 3, 52, so be prepared to debunk repeatedly!

Well-designed graphs, videos, photos, and other semantic aids can be helpful to convey corrections involving complex or statistical information clearly and concisely 95, 96, 97.

The truth is often more complicated than some viral false claim. You must invest effort in translating complicated ideas so they are readily accessible to the target audience—so they can be easily read, easily imagined, and easily recalled 98, 99, 100.

Mobilize social media users to respond quickly to misinformation by sharing facts. A platform’s efforts may not be sufficient in scope or scalable to misinformation; user correction can work if people feel emboldened to engage in it 101, 102.

“Focus on interpersonal effects in online communication:‘see something, say something’ ” 102.

Individuals have the ability to make a difference online: Corrections from users, experts, and algorithms (e.g., recommending related articles that contain a correction) can all be effective in reducing community misperceptions when responding to misinformation 103, 104, 105.

Seeing someone else on social media being corrected (known as observational corrections) can lead to more accurate attitudes on various topics 61.

Conversely, not speaking out can lead to a “spiral of silence”, both for the person being corrected and for the observer, where a mute majority cedes a narrative to a vocal but misinformed minority 106, 107, 108.

Example of a Refutation 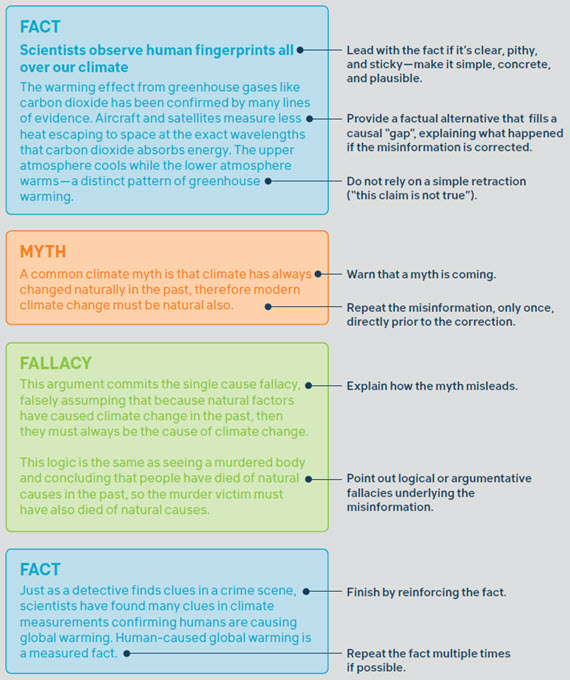