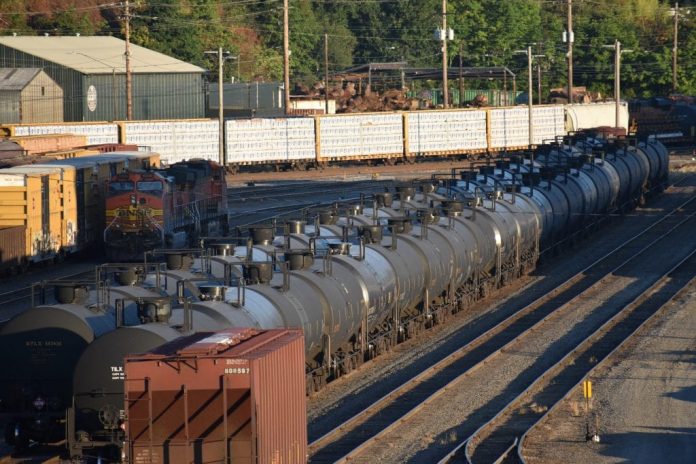 New large-scale fossil fuel projects have become mostly unworkable in the Pacific Northwest, with dozens canceled over the past decade due to fierce opposition from local communities. But the industry’s blitz is not yet over. Instead, rather than building new pipelines, it is seeking to expand existing infrastructure in a way that will provoke less pushback.

Since 2012, an estimated 55 coal, oil, and natural gas projects have been proposed for the Pacific Northwest — encompassing Oregon and Washington, as well as British Columbia. But more than 70 percent of them have been defeated, according to a recent study from the Seattle-based Sightline Institute.

“The fossil fuel industry really was trying to turn the Pacific Northwest into a coal, oil, and gas export hub,” Emily Moore, a senior researcher at Sightline Institute, told DeSmog. “We could be looking at a really different picture right now if all of those had gone through.”

The Pacific Northwest was targeted by the fossil fuel industry because it is situated between the massive reserves of coal, oil, and gas in interior North America and fast-growing Asian markets.

As Moore notes, the proposals came in waves, largely the result of whims in energy markets and changes in federal policy that allowed for more exports. First, developers proposed a series of coal train projects in the early 2010s, as domestic coal demand went into decline but was soaring overseas. Then, when the Obama administration lifted the ban on crude oil exports in 2015, new oil export projects were in vogue. Finally, the glut of natural gas led to a wave of proposals to export liquified natural gas (LNG), as well as for related gas products, such as propane and methanol.

But coalitions of environmental groups, landowners, and tribes fought back — and more often than not, they won. Forty of the 55 projects were canceled, six were completed, and nine more are either under construction or on the drawing board.

“It’s really hard to underestimate the climate devastation those projects would have had,” Moore said.

If all had gone forward, the Pacific Northwest would have added more than 2 billion metric tons of carbon dioxide annually. That is roughly equivalent to 30 percent of the United States’s greenhouse gas emissions or nearly three times the emissions of Canada, the world’s tenth largest emitter.

A few high-profile defeats for the fossil fuel industry stand out. Longview, Washington, could have been home to Millennium Bulk Terminals, the largest coal export hub in the country, but that project was denied a permit in 2017. A little upstream on the Columbia River could have been the Tesoro Savage oil export terminal, which would have also been the nation’s largest at the time, in Vancouver, Washington. Then there was the saga of Jordan Cove LNG, a project that sought to take land from private landowners in southern Oregon in order to build a long-distance gas pipeline, transporting fracked gas from the Rocky Mountains and British Columbia to the Oregon Coast for export.

Those projects, along with dozens of others, fell by the wayside. On each occasion, grassroots activists, tribes, and local communities, faced long odds, and often had little help from elected officials. The resistance to the fossil fuel industry has been dubbed the “Thin Green Line” by Sightline, a nickname that caught on and seemed to carry more weight with each consecutive victory.

“I think it’s important to celebrate these wins,” Moore said. “We do need to dismantle the dirty legacy of our existing fossil fuel infrastructure, but I think it’s a positive story that we didn’t become a major fossil fuel export hub.”

British Columbia remains more friendly turf for oil and gas companies. The massive Trans Mountain expansion and the Coastal GasLink pipelines, which are currently under construction, would pump oil and gas across Indigenous lands to the Pacific Coast. A handful of additional LNG projects are on the drawing board, and both the provincial and federal governments are supportive of a further expansion of oil and gas.

“The projects that remain in BC – LNG projects in the Trans Mountain oil pipeline – would also be in place for about 30 or 40 years,” Moore said. Canada, like much of the world, is aiming to hit net-zero emissions by 2050, but these projects could conceivably operate well into the second half of the century. “We have very limited time to meet the 1.5-degree goal and even to meet the 2-degree goal, so we don’t have any wiggle room in the carbon budget to be locking in decades more of fossil fuel infrastructure,” she added.

Expanding Under the Radar

Even though many projects ran aground in the Pacific Northwest, the fossil fuel industry is not giving up yet. Recognizing that building new long-distance pipelines will face opposition, a new strategy could be afoot.

TC Energy is hoping to expand its Gas Transmission Northwest (GTN) system, a large pipeline that carries gas from British Columbia to Washington, Oregon, and California. The expansion project, called GTN Xpress, would add 250 million cubic feet of gas per day to the system’s capacity, equivalent to around a quarter of Washington state’s entire annual gas consumption, according to a separate report from Sightline.

TC Energy says that its pipeline expansion would go to meeting new market demand. However, regional gas demand is set to shrink, not grow. In fact, the region is making deliberate moves to reduce gas consumption. Washington and Oregon both have 100 percent renewable energy targets, and the states also have emissions reductions targets specifically for gas utilities.

In addition, Washington State has banned gas hookups in new commercial buildings, and could follow that up later this year with a prohibition on gas connections for new residential construction. More broadly, a growing movement in much of the country to ban gas in new construction is gaining momentum. More than 50 cities, mostly in California, have banned gas, and the trend is gathering pace in the Pacific Northwest. Bans on new connections all aim to stop the growth of the gas system.

Utilities are pushing back with misleading advertising and propaganda, but the trend away from gas is clear.

TC Energy is likely aiming to push out other gas companies from the Northwest to gain more market share, according to Sightline. But the risk is that more infrastructure would lock the region into decades of gas use, despite the desire by policymakers and the public to break free of gas. Moore likened it to “someone opening a smoke shop in your house when you’ve just quit smoking.”

“While you might have every intention of never having another cigarette, having it at your fingertips makes achieving that goal all the more difficult,” she wrote.

TC Energy’s regulatory filings suggest it is pursuing a subtler strategy that could prove more successful than the long list of fossil fuel projects shelved over the past decade. Rather than apply for a big increase in capacity, it has filed for a series of small increases, which could arouse less regulatory scrutiny and public outrage if deemed to be separate projects. And because it is expanding along an existing pipeline route, the company will confront fewer landowners, or other opposition groups.

“Our region has defeated some of the nation’s largest coal, oil, and fracked gas projects over the last two decades. We are seeing a shift today where fossil fuel companies are more sneaky in how they frame new projects,” Brett VandenHeuvel, outgoing executive director of Columbia Riverkeeper, told DeSmog. “They attempt to piecemeal projects to make them look smaller, focus on expanding existing infrastructure, and claim projects are needed for reliability but redact the data as classified.”

“For GTN Xpress, the scope of the project involves upgrades and modifications to existing compressor stations,” TC Energy said in a statement to DeSmog. “It is preferred to use existing rights-of-way for energy infrastructure projects, as possible, for many reasons, including the location of existing energy facilities and land rights.”

The company added that its work aims to “provide reliable service and meet customer demand,” adding that “[s]pecifically, for natural gas, our role is to move supply to existing and new markets for those who contract our service via energy infrastructure.”

But VandenHeuvel added that the industry is fighting hard to keep its grip on the region as Washington and Oregon are clearly trying to move away from gas.

“Unfortunately, fracked gas companies can pass on the costs of building unwanted and unneeded projects to their customers by increasing their rates,” VandenHeuvel said. “This is the behavior of a dying industry.”

The post The Pacific Northwest Has Defeated Dozens Fossil Fuel Projects — But the Industry Still Wants to Quietly Expand appeared first on DeSmog.