Heat has been accumulating to the Earth’s climate system quite steadily for decades. This has not prevented the apparent slowdown of warming seen in global mean surface temperature (GMST) since 1998 to become one of the pet claims for climate misinformers. Recently, we discussed this issue in our two papers (paper 1, paper 2).

There are many factors that affect the GMST at any time, which causes the GMST to show quite a lot of variability especially in short term. This variability means that even in the presence of overall long-term warming, almost at any time it is possible to claim that it hasn’t warmed since the year X (like the escalator graph so neatly demonstrates). As time goes by, you have to update the X, because with long-term warming you get a new high peak every now and then making it impossible to keep the same X all the time.

Currently there is a transition period going on. While some of the misinformers are still desperately clinging to the expired X = 1998, some of them have switched to X = 2016 (and some of them have curiously taken a kind of a middle ground by claiming that after 2016, we are back at the “hiatus level”, but this usually requires some creative, Y-axis inflating graph trickery).

The cherry pick of 2016 is the same as the cherry pick of 1998 – a strong El Niño which is known to elevate the GMST temporarily. With this in mind, I decided to compare the temperature evolution after 2016 to what happened after 1998. I also went a step further and included the temperature evolution relating to another strong El Niño of 1982-1983 that happened during the modern global warming era.

First, let’s see how these compare to each other when time window is comparable to the 2016 event. Below I have plotted the temperature evolution of all these three events in the same graph so that they have been offset by their means over the time period equivalent to 2015-2018 (Starting slightly before the 2016 El Niño and extending it to end of 2018 which is the last full year that GISS monthly data currently contains). For the 1998 event this time window is 1997-2000 and for the 1983 event it is 1982-1985. The Y- and X-axis of the graph show the values corresponding to the 1998 event.

(Link to a bigger version of the graph.)

We see that close to a strong El Niño event, the GMST tends to behave similarly regardless of time period. This is not very surprising with such a short time window. Now, let’s use the time window that shows the temperature evolution after 1998. Our time window is now 1997-2018, which is 21 years long. Obviously we don’t have that much data for 2016, but we have that for the other two El Niños (as a sidenote, one can even add the temperature evolution relating to 1972-1973 El Niño with practically same end result). So let’s plot the two events that have enough data, but let’s also plot the data we have for 2016 over that, and let’s label the X-axis starting from 2015. The X-axis then extends well into the future and we can call the resulting graph a “prediction”. Can you see where the temperature is most likely to go in the future? 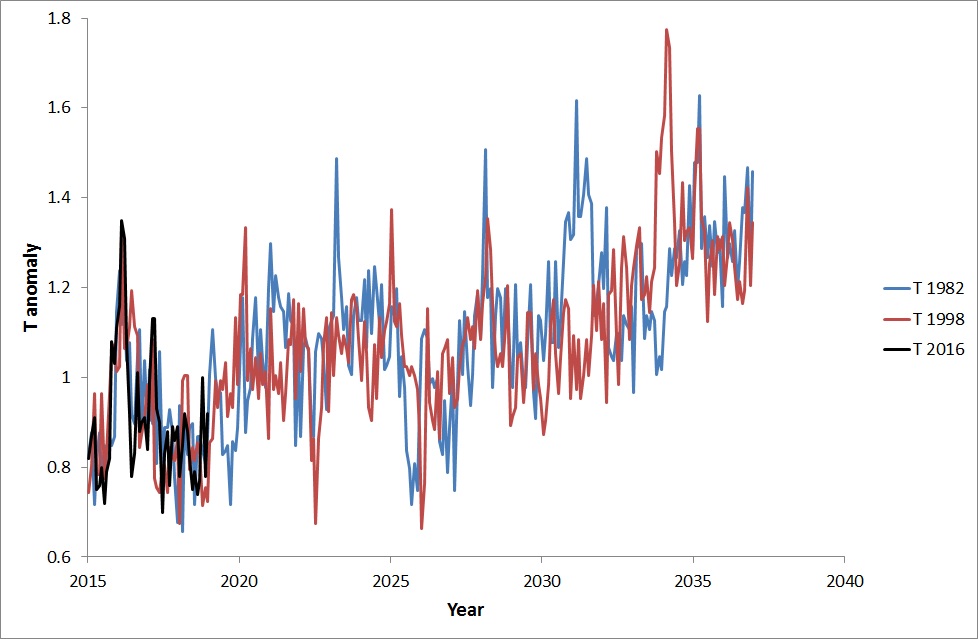 (Link to a bigger version of the graph.)