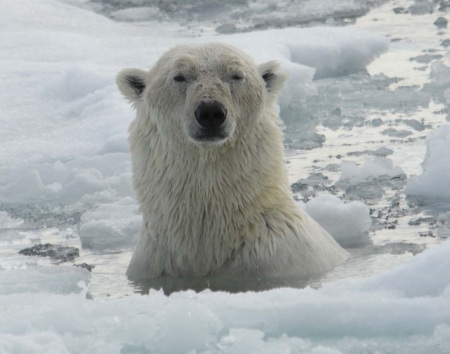 Posted on 30 November 2017 by Bart Verheggen

This is a re-post from My View on Climate Change

Although there is strong agreement within the scientific community about anthropogenic causation of recent climate change, a large segment of the general public has doubts about these conclusions. This is sometimes referred to as the ‘consensus gap’. Blogs and other social media play an important role in spreading misinformation, which fuels the distrust in science.

Jeff Harvey, a Canadian ecologist working at the Netherlands Institute for Ecology (NIOO-KNAW) and the Free University of Amsterdam (VU), set out to investigate how the information on blogs relates to the scientific literature. The focus was on conclusions about Arctic sea ice and polar bears. The results have been published in the article “Internet Blogs, Polar Bears, and Climate-Change Denial by Proxy” in the journal Bioscience. Disclaimer: I’m a co-author of said article.

So what did we find? There is a clear separation amongst blogs, where approximately half of the 90 blogs investigated agree with the majority of the scientific literature, whereas other blogs took a position that is diametrically opposed to the scientific conclusions. Most of the blogs in the latter group based their opinions on one and the same source: Susan Crockford. 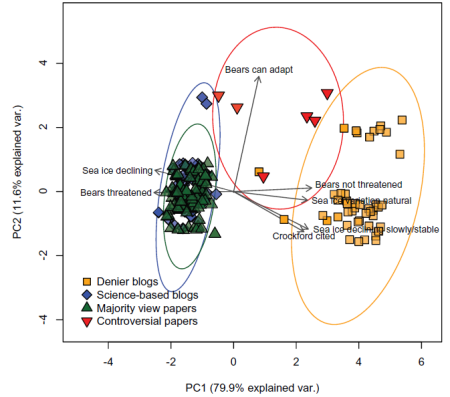 90 blogs and 92 scientific articles were classified according to six statements about Arctic sea ice and polar bears and the citation of Crockford. The figure shows the results of a principal component analysis (PCA) of the results. PCA is a technique to show the maximum amount of variation in a dataset with a minimum of newly defined parameters, the so-called principal components. The score on PC1 shows a separation between on the one hand the position that Arctic sea ice extent is shrinking and that this poses a threat to polar bears (most scientific articles and science-based blogs) and on the other side the position that Arctic sea ice is not shrinking or that it’s due to natural variability and that polar bears are not threatened (pseudo-skeptical blogs).

Arctic sea ice has shrunk dramatically in the past few decades, both in surface area and in thickness. This trend is expected to continue with ongoing global warming as a result of greenhouse gas emissions. Of course the decrease in sea ice doesn’t happen monotonically, but rather with ups and downs as a result of natural variability. When it happens to fit their perspective, such short term fluctuations are framed as a ‘recovery’ on certain blogs, or the decrease in Arctic sea ice is downplayed in other ways.

Polar bears depend on sea ice for catching their main prey, seals. So their habitat literally melts away as temperatures rise. Over time, polar bears have become iconic symbols of the negative effects of global warming. The population has been relatively stable so far, but you can’t just extrapolate that to the future. Biological impacts are often non-linear, and their dependence on sea ice means that in the future polar bears will likely face difficulties from continuing warming trend. Indeed, they have been classified as ‘vulnerable’ by the International Union for the Conservation of Nature (IUCN) and as ‘threatened’ under the US Endangered Species Act. 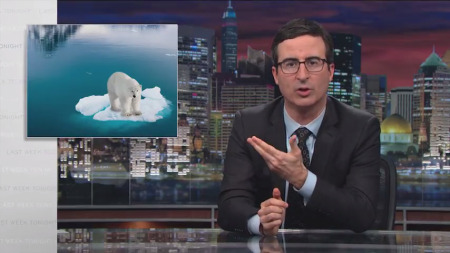 “No climate report is complete without an obligatory photo of a polar bear balancing on a piece of ice”, John Oliver said in the famous 97% episode of “Last Week Tonight”.

But what about the previous interglacial?

The polar bear species has survived the previous interglacial ~125,000 years ago. Some deduce from that that the polar bear will be fine. However, if CO2 emissions aren’t drastically reduced temperatures will get a lot warmer over the coming centuries and even millennia than during the previous interglacial. Moreover, during the previous interglacial summers were probably not completely ice-free, as is expected to happen  later this century as a consequence of continuing warming (which of course depends on how global emissions evolve). The current warming trend is many times faster than back then, making potential adaptation to new conditions more difficult. Besides shrinking sea ice there are currently also other factors that negatively affect polar bears, such as human settlements, industrial activities, hunting, bio-accumulation of toxins, and smaller seal populations.

A future with ‘business as usual’ emissions doesn’t look bright for the polar bear. Blogs appear to fall into two camps in how they write about this topic. On pseudo-skeptical blogs scientific uncertainty is twisted into ignorance, or the current situation is extrapolated into the future without taking into account the available knowledge of polar bear ecology. They usually don’t base themselves on the scientific literature, but rather on the statements of one person. These rather unfounded opinions are consequently recycled via the blogosphere, which in this respect acts as an echo-chamber. Susan Crockford writes a lot about polar bears, but does so mostly on her own website and for anti-mitigation thinktanks such as the Heartland Institute and the Global Warming Policy Foundation (GWPF); not in the scientific literature.

The gap between scientific conclusions and pseudo-skeptical blogs will not be a great surprise to those who closely follow both the scientific and the public debate about climate change. After all, this tendency is more generally visible than only on the topic of Arctic sea ice and polar bears. This is however the first time that this has been demonstrated on the basis of a systematic comparison between the scientific literature and blogs. To close the consensus gap the authors call on their fellow scientists to actively participate in the public debate.