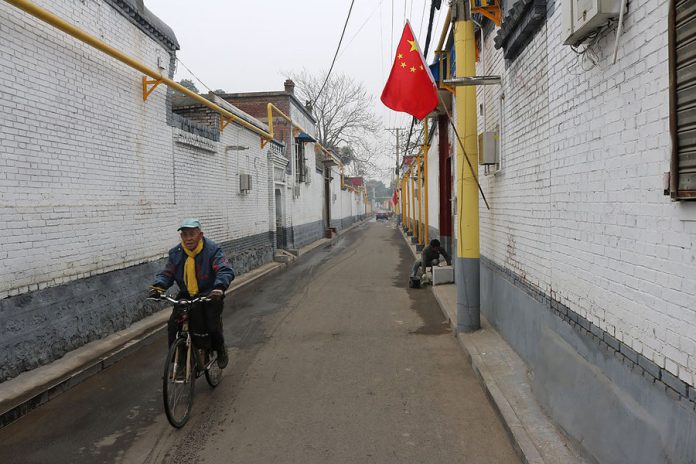 Taiyuan, China—Yin Xiaoling stands in her kitchen on a recent morning admiring her new gas-powered boiler. With winter approaching, she’s happy to have it in place of her old coal furnace, which covered her courtyard in soot and required frequent upkeep. The air outside is dense with smog, but Ms. Yin is optimistic that such days will soon be few.

“The gas heater is clean and convenient,” she says. She then makes a declaration that not long ago would have been considered unthinkable in Nanxianwen, a quiet village in the heart of China’s coal country. And although she speaks of her own family, she might as well be speaking for the entire village.

Gas heating, a small miracle for Yin and her family, is part of a much larger transformation for Taiyuan, a sprawling city of 4.3 million people that includes Nanxianwen. The municipal government has replaced coal furnaces with natural gas heaters in more than 110,000 homes over the past six months. As the heaters begin to turn on, the hope is that they will help reduce the dense smog that engulfs the region during the cold winter months.

Air pollution is chronic across industrialized China. For decades, the country seemed willing to tolerate it as an inevitable consequence of economic development. But such acceptance has started to fade amid growing calls for better living conditions and more sustainable growth. President Xi Jinping acknowledged as much in his opening speech at the 19th Communist Party congress last month. To help alleviate the social tensions posed by pollution, China is intensifying its fight to clean up the skies.

“Now that air pollution has become a political issue, not only an economic issue, it’s more likely to be addressed,” says Lin Boqiang, an energy policy researcher at Xiamen University. “If the Chinese government wants to do something, there’s no question that it will get done.”

So perhaps it’s no surprise that Beijing has strengthened its crackdown on steel mills, coal-fired power plants, and other polluting companies in recent months. Teams of inspectors have issued more than 825 million yuan in fines ($125 million) so far this year, all while ordering tens of thousands of violators to clean up their operations or risk being shut down – a source of anxiety for generations of miners and factory workers here.

In a related campaign announced on Aug. 21, the Ministry of Environmental Protection has ordered 28 cities in northern China, including Taiyuan, to reduce air pollution by at least 15 percent this winter. The effort involves switching 4 million homes to gas heating, a massive undertaking that is projected to cost the government billions of dollars in installation fees and subsidies meant to help cover household heating bills (natural gas can cost up to three times more than coal).

The change is plainly visible in Nanxianwen, where Wang Jian, a local Communist Party official, is reminded of an old saying as he talks about the transition to gas heating. “A village isn’t a village unless there’s smoke coming from its chimneys,” he says. Now that all of the chimneys in Naxianwen have been torn down, its residents will have to come up with a new way to let others know that they’re here.

Taiyuan has long experienced some of the worst air pollution in China, and is aiming to curb it by 45 percent between October and March. Last year, it had the highest levels of sulfur dioxide of any large city in the country. The pollution is worst in winter, when coal-burning heaters fire up and add to the toxic emissions that spew from factories and power plants.

Meanwhile, the side effects of burning coal in China have become increasingly clear. Air pollution caused by coal-fired heating has cut life expectancy in northern provinces by just over three years compared with provinces in the south, according to a study published in September. A separate study released last month found that pollution killed 1.8 million people in China in 2015.

Taiyuan’s relationship to coal has started to change as public awareness about the health risks of pollution grows. On Oct. 1, the municipal government enacted a ban on the sale, transport, and burning of coal by individuals and companies. (It made an exemption for some state-owned steel and power plants.) The ban could cut the use of coal by 2.2 million tons, or about 90 percent of the city’s total consumption.

The transition away from coal presents a kind of existential moment for Taiyuan. As the capital of Shanxi province, whose coal helped fuel China’s economic boom, the city is dotted with coal-fired power plants. But many of them have been shut down in recent years, leaving only a handful of the largest ones in operation.

In a city built on coal, the uncertainty of what comes next has left some residents with a sense of unease. The coal industry has provided steady employment to hundreds of thousands of them for decades.

Even roadside food vendors in Taiyuan, many of whom cook with coal briquettes, are worried by the new citywide ban. “I’m not sure what will happen,” says Duan Shushi, who sells roasted sweet potatoes from the back of his flatbed cart every winter. “If the ban is strictly enforced, I won’t be able to earn money.”

Yet despite all of Taiyuan’s efforts as a city, China has, overall, seen a recent uptick in coal production – the result of rising prices and increased activity in energy-intensive industries. While analysts predict that the country will be far less reliant on coal in the future, they are divided on how soon demand will peak.

Shanxi, for its part, hopes to bolster economic efficiency by closing excess factories and mines that had fed a glut in production. The province, which produces nearly a quarter of China’s coal, plans to eliminate 17 million tons of capacity and close at least 27 mines by the end of this year.

Shanxi has also vowed to cut airborne levels of sulfur dioxide and PM2.5, particles that are small enough to penetrate the bloodstream, by 40 percent this winter. But Lauri Myllyvirta, an energy analyst for Greenpeace in Beijing, says the recent rise in coal production could complicate those efforts, as could a government decision to reverse the suspension of an additional 6 gigawatts of coal-fired capacity in the province.

The consequences of the increase are palpable in Taiyuan, which is located in the middle of Shanxi. Greenpeace estimates that PM2.5 levels in the city were on average 33 percent higher during the first half of this year than they were during the same period last year. Mr. Myllvirta says that until manufacturing and other heavy industries in the surrounding region are brought under control, targeting residential coal use will only do so much to reduce pollution.

“I believe that the current surge in industrial activity is temporary,” he says, adding that “we really have to wait a couple weeks until after the heating season starts to have a sense of how strong the implementation is of all these new measures.”

Regardless of what happens this winter, Taiyuan, like much of northern China, has a long way to go toward reducing air pollution. China may produce more solar and wind energy than any other country, but it still relies on coal to generate three-quarters of its electricity – making it the world’s top coal consumer and biggest emitter of greenhouse gases.

For Du Aizhi, who’s worked at one of oldest coal-fired power plants in Taiyuan for 26 years, China’s move away from coal can’t happen quickly enough. She says she doesn’t even mind the pay cut she received when the plant shut down most of its operations in May. Standing outside its front gate, in the shadow of two towering smokestacks and beneath an aluminum-gray sky, Ms. Du says she is hopeful for Taiyuan’s future.

“We are making a sacrifice, but I feel it’s worth it for the next generation,” she says, as dozens of new electric taxis drive past. “A good environment is good for everyone.”

Xie Yujuan contributed to this report.