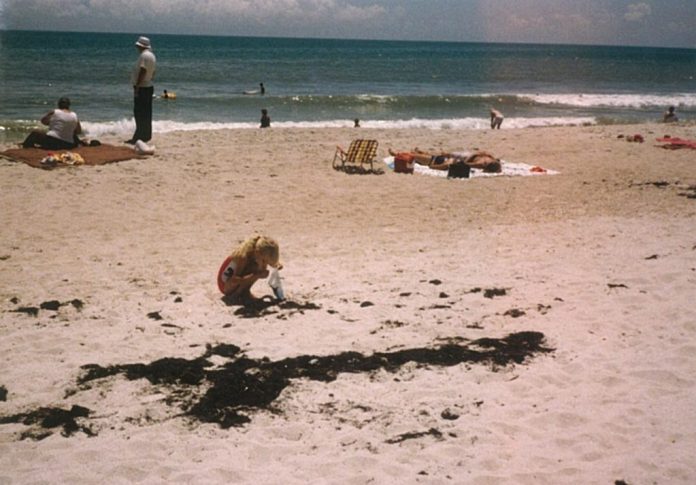 Ginger Krieg Dosier’s inspiration for changing the ground beneath our feet was a seashell she picked up on a beach at 8 years old.

To understand how, go outside and stand on a sidewalk. OK, look down. Odds are you’re staring at one of biggest contributors of greenhouse gases on the planet.

Cement is the glue that holds together the stones, pebbles or whatever tough material goes into your concrete bricks and sidewalks. But its production creates more carbon emissions than all the airplanes and ships in the world. Manufacture a ton of cement, and you’ll inject a ton of carbon dioxide into the atmosphere.

Young Ginger wasn’t thinking about such matters when she grabbed the shell from the sand.

“The 8-year-old version of myself was really looking at the beauty of the seashell, but also trying to understand how it was grown underwater,” Ginger Krieg Dosier told NewsHour. “It was so hard and durable. Very similar to your own bones. That was where the seed started.”

That seed, plus 30-odd years, blossomed into a way to grow (yes, grow!) cement and concrete bricks without emitting carbon dioxide.

From second bedroom to biocement

Cement-making accounts for about 5 percent of all industrial and fossil fuel emissions each year. Nonetheless, it’s a sizeable amount — more than all the emissions created by airplanes and ships. The scientific zeitgeist argues that human-made carbon emissions must reach net zero to avoid 2 degrees Celsius of global warming and the destabilization of the Earth’s environment through climate change.

Krieg Dosier is the CEO and cofounder of bioMASON, a biotechnology startup in Raleigh, North Carolina, that has spent the past four years using bacteria to grow cement and make bricks. This microbial business venture is a departure — and not a microscopic one — from the industry norm.

Portland cement, by far the most common variety of the material in the world, starts as a rocky blend of limestone and clay. This mineral mixture gets heated inside a rotating kiln to 2,500 to 2,800 degrees Fahrenheit.

Of the two billion tons of CO2 emissions created each year by cement production, half come from fossil fuels burned as an energy source for the kilns. The energy used to bake one ton of cement could power the average U.S. home for more than a month.

The remaining emissions are due to calcination, a chemical process triggered by heating the limestone to split it into calcium oxide and carbon dioxide (CO2). The calcium oxide progresses through a series of reactions to become cement’s binding base, while the CO2 — a greenhouse gas that contributes to global warming — enters the atmosphere.

Cement-making accounts for about 5 percent of all industrial and fossil fuel emissions each year…more than all the emissions created by airplanes and ships.

Jackson sees three possible options for escaping cement’s emission. One, manufacturers could switch from fossil fuels to renewable power like wind and solar — though that only cuts about half the carbon emissions. Two, scientists could develop technology to recapture carbon from the air, which some are trying to do. Or, the CO2 emissions could be eliminated from the get-go.

“Anything we could do to reduce it [cement’s carbon emissions] would be helpful,” said Robert Jackson, a Stanford University environmental scientist and chairman of the Global Carbon Project, a research collective that monitors greenhouse gas emissions. “In general, carbon dioxide emissions have been going up from cement because, as we have more people on the earth and countries like China industrialize, we’re producing a lot more cement than we did 10, 20 or 30 years ago.” 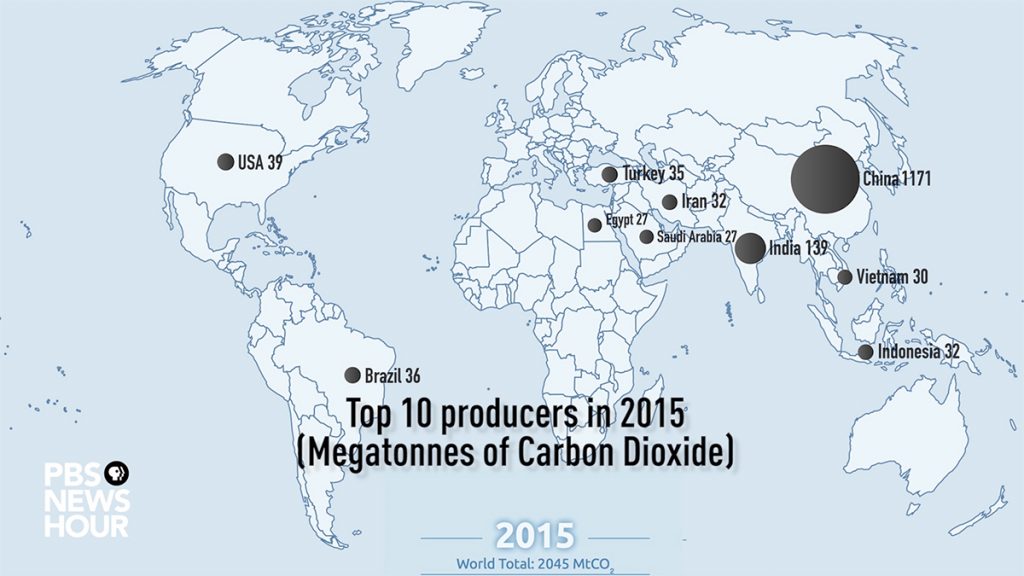 Top 10 producers of cement-related carbon dioxide emissions in 2015 (in megatonnes of CO2). China produced three times as much cement as the next nine top producers. Photo and data by Global Carbon Atlas

A decade ago, Krieg Dosier was contemplating this pollution problem as a freshly minted architect and assistant professor of architecture at North Carolina State University. Her thoughts turned back to seashells.

Seashells — the protective outer layer made by some marine animals — are composed of calcium carbonate, the hard stuff found in limestone. (Hard corals, your teeth and bones are made of the same material). She wondered if biologically made — or biomineralized — calcium carbonate could replace cement and make concrete bricks.

When she wasn’t teaching, she conducted side research and landed upon bacteria as a source of calcium carbonate. Microorganisms like bacteria and algae can feed on organic waste — dead corpses, poop — to form limestone deposits. 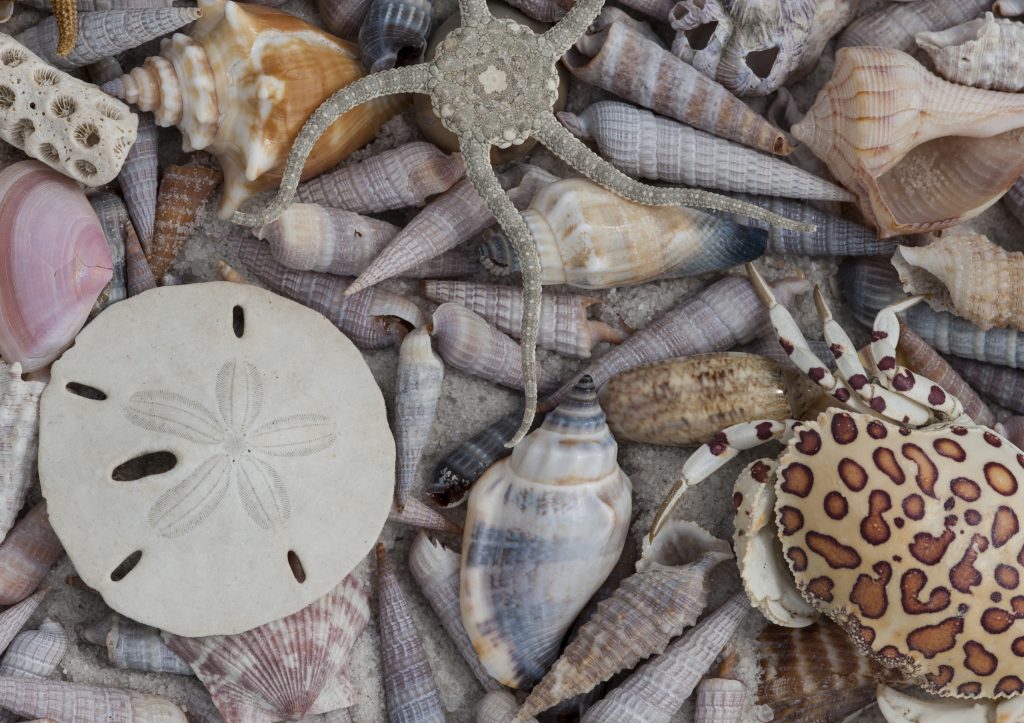 In nature, the process is slow with calcium carbonate-making bacteria. The right conditions may occur once every few years. So Krieg Dosier, along with her husband and fellow architect Michael Dosier, became home brewers of calcium carbonate.

“My husband and I did a lot of work early on with the process where we had microorganisms growing in our second bedroom,” Krieg Dosier said. “It was a pretty awesome lab. It was a safe lab. We did have ways of sterilizing, ways of keeping the culture alive in incubators.”

By that time, the Dosiers had moved to the United Arab Emirates to teach architecture at a university. The location provided plentiful sand, raw material for making bioconcrete. “There’s not a lot of uses for sand that’s that fine, so it became a good testing material for us,” Krieg Dosier said.

After years of toil and 111 failed experiments, the Dosiers landed on the right brewing conditions for bioMASON cement.

BioMASON’s innovation hinges on a rod-shaped bacteria called Bacillus. They use a Bacillus strain that’s naturally occurring (no genetic modification) and it doesn’t cause disease. This particular microbe is found everywhere, including inside limestone caves. 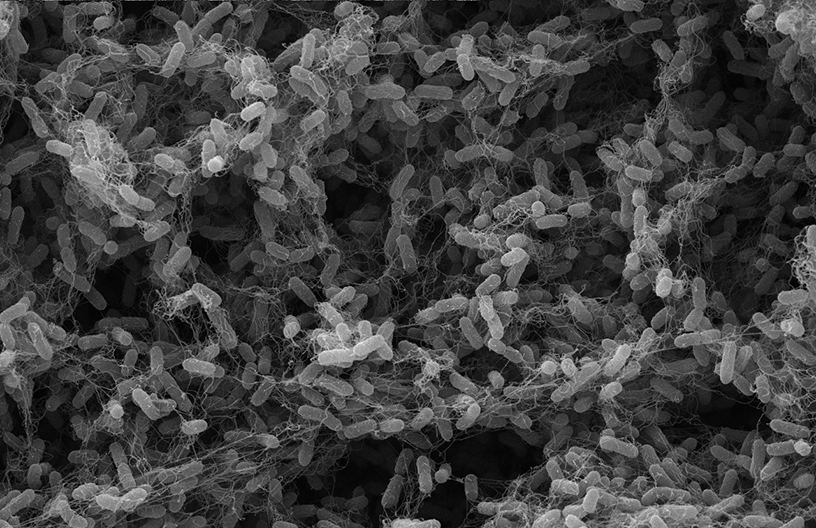 “The organism creates a microenvironment that enables the formation of this calcium carbonate [limestone] crystal,” said Michael Dosier, chief technology officer at bioMASON and Ginger’s husband. “That’s effectively how it’s evolved in nature over billions of years.”

But rather than take months or years to harden, bioMASON’s bacteria cement finishes the deed in two to three days. The whole process happens at room temperature, without the need for burning fossil fuels or calcination.

“If you started with the same raw materials, and didn’t have to cook the limestone to a couple thousand degrees, it would definitely reduce the carbon dioxide emissions,” Jackson told NewsHour via Skype. “The notion of using bio-products is happening all around the world and for many industrial processes, so I think it’s a good idea to try.”

BioMASON’s microbe not only skips the high heat, it also absorbs CO2 from the air to make the calcium carbonate, Ginger said. While we’re standing in inside one of bioMASON’s labs, Michael squirts a bit of calcium into bacteria primed in a proprietary chemical cocktail. Calcium carbonate crystals form almost instantaneously.

Inside bioMASON’s labs, a handful of architects experiment with aesthetic elements of the bricks. The biocement itself carries an off-white, almost translucent crystal that readily absorbs colors and adapts to different textures. They can make bricks look old and burnt without using fire, or ones with logos that glow in the dark. Some bricks feature drawings that only appear in the rain.

To make bricks, bioMASON engineers start by pouring a pitcher of primed bacteria into a mixer full of foundation material, such as sand or pebbles. Paddles churn the concoction, so the bacteria slip evenly in-between the particles of the rocky material.

Next, the tank holding the brew tips upward, and the goop slides into machine called “the hopper.” The wet biocement funnels into the hopper’s brick molds, and a hydraulic plate covers them. Flip a switch, and the plate presses into the material while vibrating furiously.

“Imagine you put sand into a cup, and it just sits kind of fluffy,” Michael said. “But if you put a plate on top and vibrate it, those particles shift around until they nestle and find their home.”

The nestled bricks slide out of the hopper like bread rolls and get rolled into a shipping container, where they harden over three to four days. A few from each batch run through a series of quality control tests — erosion, freeze/thaw — to meet international industry standards.

“We figure out how much force can be applied to the material itself” through compression, Ginger said in one of bioMASON’s labs. 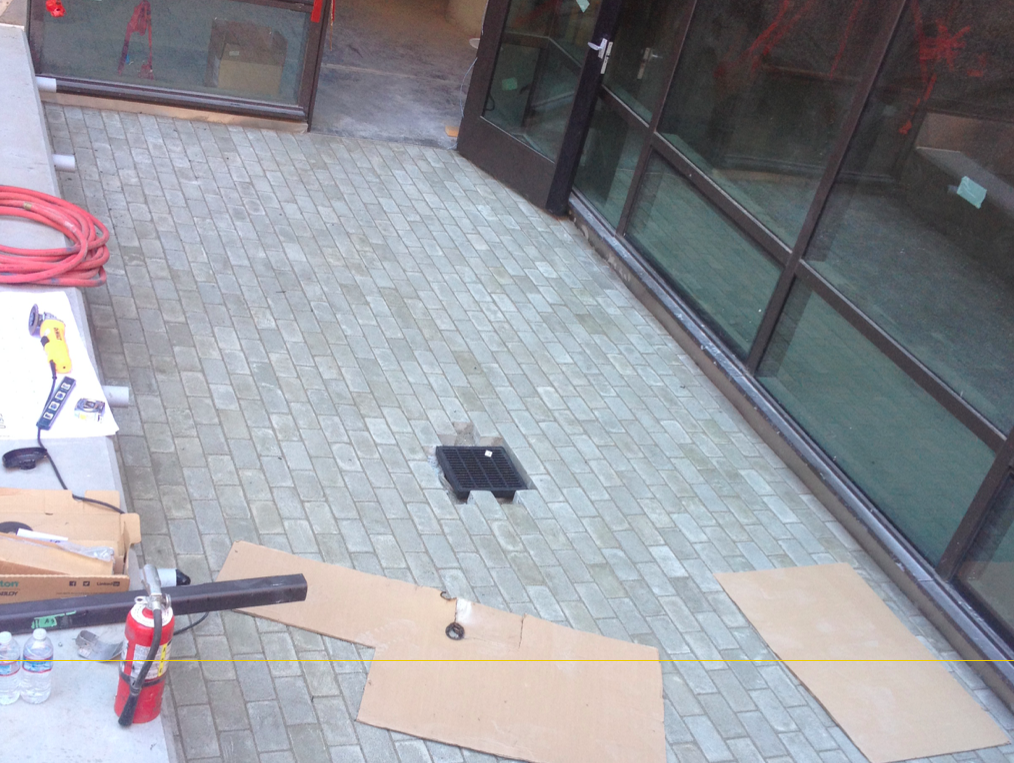 As she spoke, engineer Stephen “The Crusher” McAllister applied 26,000 pounds of force to a shoe box-sized block before it broke. This degree of stress would occur in a thin-facing brick wall of a three-story building. Preliminary installations — two courtyards in San Francisco and a series of small walls — are testing the bricks’ resilience in the real world.

BioMASON is now looking to scale up production. The company moved in May 2016 to a large warehouse on the outskirts of Raleigh, where their 20-person team churns up to 10,000 bricks at a time with the hopper. Ginger said the costs of biocement are difficult to compare with regular cement, given the source components are different, but right now in general, bioMASON production runs at parity or below.

In the future, the company plans to put the entire assembly line — mixer, hopper and all — into shipping containers, so that biocement can be made anywhere.

“We don’t need a fuel source. We don’t need high energy, so we are looking at being able to detach,” Ginger said. And by doing so, they may cement a brighter future for our planet.

Editor’s note: BioMASON receives a small business grant from the National Science Foundation. The NSF is also a supporter of the PBS NewsHour.