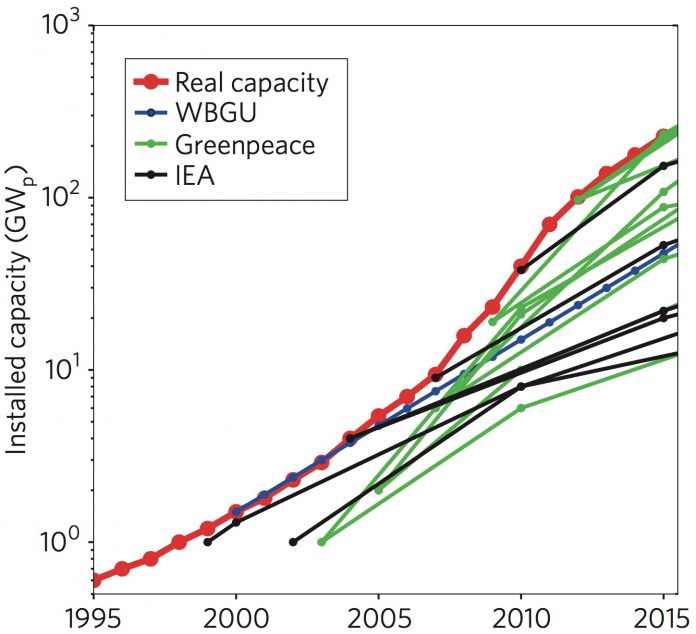 Solar and wind energy have been underestimated by analysts and politicians again and again and again. They have gotten cheaper and scaled up faster than even the most optimistic forecasts of a decade ago, or even a few years ago.

And there’s good evidence we’re still underestimating them. In fact, two new reports — one on solar, one on wind — make the point vividly. They argue that the radical trends of the last decade are going to continue, which is all that needs to happen for the energy system to tip over from disruption into revolution.

So far, official predictions have fallen woefully short of the rise of solar photovoltaic (PV) energy:

That red line is installed PV capacity. The black lines are forecasts from the International Energy Agency (IEA), blue from the German Advisory Council on Global Change, and green from Greenpeace. Only Greenpeace’s projections have come close, and only recently.

The graph is from a new commentary in the journal Nature Energy, by researchers from Germany’s Mercator Research Institute. In it, they review the reasons why models have traditionally underestimated PV and then try running a popular model updated with better information. The results are instructive, to say the least — if they are right, PV could potentially provide fully half of global electricity by 2050.

In most models that show the world reducing emissions enough to hit the 2°C climate target, “solar energy emerges only as a minor mitigation option” — around 5 to 17 percent of global electricity supply in one representative study used by the Intergovernmental Panel on Climate Change (IPCC). Models tend to be much more bullish on energy from biomass, despite its much lower total potential.

Why are models still so tepid on PV, despite its record? What are they missing? The researchers hone in on three phenomena that most models fail to properly account for:

There is every reason to think all three of these phenomena will continue to be true in coming years. (The report contains a short but fascinating discussion of all the many technological developments on PV’s horizon — still tons of room to improve.)

The researchers see two key challenges ahead, if PV is to continue its rapid expansion. The first is the cost of financing, especially in the developing world. The second is integrating high levels of wind and solar into the grid. (Because wind and solar are variable, they require sophisticated balancing from other sources and grid technologies; I wrote about that challenge in some detail here.)

Say PV can address those challenges and maintain its current rate of learning, improvement, and expansion. What would a more realistic model projection look like?

To find out, the researchers plugged better cost information and more aggressive cost-curve assumptions into REMIND, a “global inter-temporally optimizing energy–economy model that has been extensively used for analyses of climate policies.”

The gray shaded areas show the potential growth of PV, bounded by the lowest and highest historical growth rates. As you can see, this updated model run shows PV wildly outperforming most other model runs (the areas in other colors), eventually providing 30 to 50 percent of global electricity.

Now, there’s no guarantee that PV will continue growing at historical rates. In fact, there are reasons to think wind and solar will run into serious problems as they expand (see this post from Jesse Jenkins and Alex Trembath).

But even the bottom end of this new forecast (30 percent of global electricity) is a hell of a lot higher than the high end (e.g., 17 percent) on the forecasts the IPCC and the IEA are using. If PV can maintain anything even close to its recent explosive growth, it is going to outperform what analysts expect. Again.

Wind costs could drop another 50% and beat natural gas without subsidies, say nerds

The second bit of happy news comes from researchers at Atmosphere to Electrons, an R&D program for wind power at the National Renewable Energy Laboratory (NREL).

Their new paper is primarily about the scientific and technical challenges their team is researching — high-tech ways to further improve wind turbines and farms. But as part of the exercise, they project just how much wind costs could fall if all those high-tech solutions are implemented. It’s pretty mind-blowing.

The researchers are pursuing what they call “System Management of Atmospheric Resource through Technology” (SMART) strategies — a cluster of technologies and practices that will allow next-generation wind farms to produce more energy, more reliably, for more hours of the day. Here are the four areas of innovation they are going after, translated into English:

Just how much of a difference would these changes make? To find out, the researchers ran a simulation of a 2030 wind-power plant using all the SMART innovations, operating at a site with roughly average wind resources.

The result: unsubsidized energy costs ranging from $19 to $32 per megawatt-hour, with an average of around $23/MWh. That is roughly 50 percent lower than today’s wind power costs.

So after dropping 65 percent between 2009 and today, wind-power costs could drop another 50 percent by 2030. That’s pretty amazing. Energy costs of $23/MWh would make wind competitive with natural gas almost everywhere in America, without subsidies. 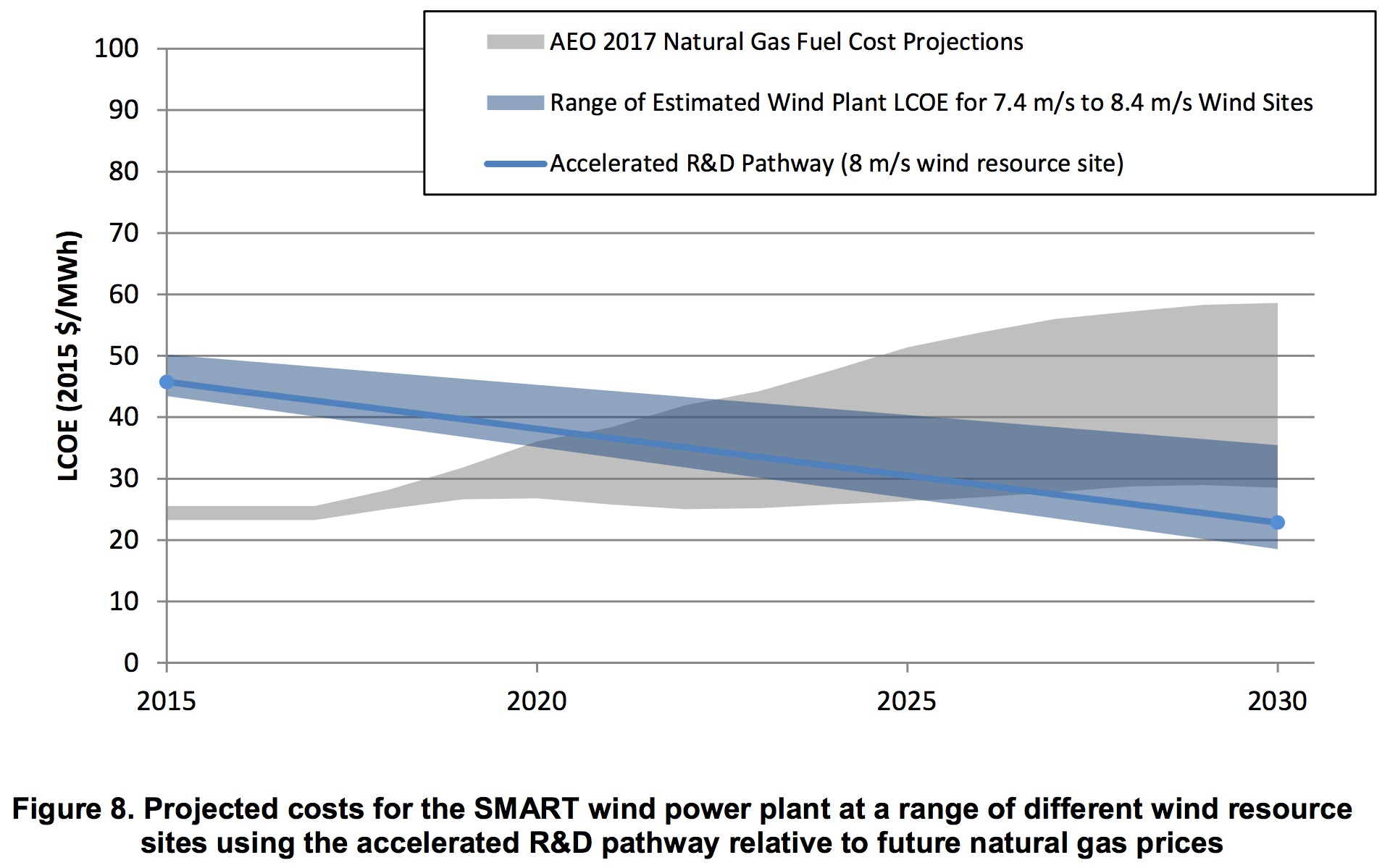 Of course, this rosy forecast is somewhat predicated on the DOE continuing to fund this kind of research, which is by no means a sure thing these days.

But as John Hensley of the American Wind Energy Association (AWEA) writes, plenty of other analysts are similarly bullish. A survey of wind energy experts last year by Lawrence Berkeley Lab found that they too expected substantial cost drops (though 40 percent by 2030 was their high end). Like solar, wind still has tons of room to improve.

It’s a little odd. Both of these reports offer forecasts that are wildly optimistic relative to the mainstream modeling community, but it’s not because they predict wind and solar are going to have some unprecedented explosion.

They simply predict that wind and solar are going to keep doing what they’re doing — keep scaling up, keep improving, keep getting cheaper — at roughly the same rate they have been. If that happens, solar PV could provide 30 to 50 percent of global power. If that happens, wind power could be 50 percent cheaper by 2030.

If those things happen, if the status quo continues, it will amount to a renewable energy revolution.

As I said, there are reasons to think wind and solar will start running into technical and financial challenges as their share of grid power rises. How much those challenges will slow them down is difficult to predict, but they’ll probably slow them down some. Getting to 50 percent wind and solar on a grid would be heroic; getting beyond that will require radical technological, political, and legal changes that go far beyond just wind and solar power plants themselves.

My own sense of things is somewhat gloomier than these reports suggest. But wind and solar have been defying gloomy predictions for well over a decade now, so maybe they’ll keep doing so.

As stockbrokers like to say, past performance is no guarantee of future results. There’s no guarantee wind and solar will stay on their current path. But at the very least, it seems like modelers should take continuation of status quo trends as their baseline, their reference case, instead of assuming, over and over, and that wind and solar growth will slow (and being proven wrong, over and over).

It may seem crazy to say in this day and age, but sometimes a little optimism is warranted.