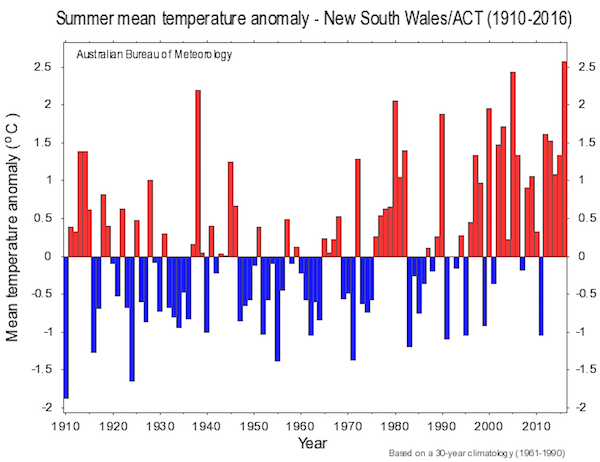 Sleepless nights and bushfire days; the hottest summer on record in the Australian state of New South Wales was made 50 times more likely due to climate change, researchers have found.

Repeated heatwaves broke maximum temperature records, culminating in the epic days of 11-12 February that pushed the mercury beyond 45C in many parts of the state. Devastating fires consumed whole villages and wildlife perished from exposure to the heat.

Analysis of the events by a team from World Weather Attribution and the University of New South Wales found the record average heat could “be linked directly to climate change”.

The researchers used two different modelling approaches and both returned a similar conclusion.

“We see that average summer temperatures like those seen during 2016-2017 are now at least 50 times more likely in the current climate than in the past, before global warming began,” the researchers said in a document released on Thursday.

High single-day maximums were also found to have been made more likely`. In this case by a factor of 10. Under previous atmospheric conditions, such temperatures would have occurred just once in 500 years. Now they can be expected every 50 years.

“The heat seen this past summer across parts of Australia is still rare in our current climate. However, if greenhouse gas emissions are not dramatically reduced, intense summer heat will become the norm in the future,” said the scientists.

The earth’s surface has warmed roughly 1C since the industrial revolution began. If the world warms to 2C, which is the upper limit set by the Paris climate agreement, extreme summer heat like this summer will happen every five years.

At a local level, the signal of climate change is more difficult for researchers to pick out. They looked at a heatwave that struck Australia’s capital city of Canberra from 9-11 of February and found that such weather was 50% more likely to have occurred in 2017 than it would have been in the past. 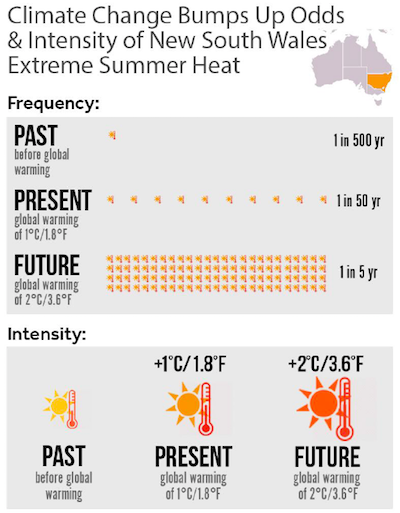 Attribution science, the field devoted to finding the fingerprints of human-caused climate change on complex weather events, is becoming ever more refined and rapidly deployed. It is seen by scientists as a key tool for helping the public understand how climate change is affecting their world.

Geert Jan van Oldenborgh, who worked on the research from the meteorological bureau of the Netherlands, said that while the results themselves had been released before being reviewed by fellow scientists, the methodologies had been tested.

“We are moving towards a situation that these kind of attribution studies are not peer-reviewed themselves but based on peer-reviewed methods. Just like a seasonal forecast, or indeed a weather forecast. If the situation has novel aspects we tend to write a scientific article about it afterwards, but I do not think that this one qualifies given the amount of work that has already been published on heat waves and warm seasons in Australia,” said van Oldenborgh.