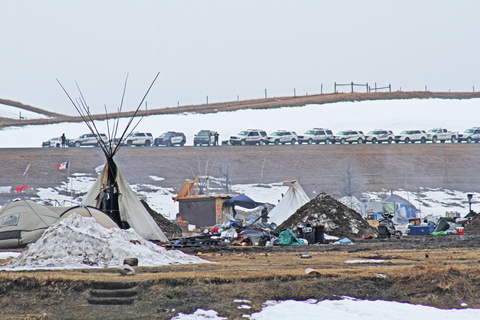 The Green Party has issued a letter to the chief executives of all UK banks currently financing the controversial Dakota Access Pipeline asking them to “immediately suspend all credit lines”.

Despite previous calls for British institutions to divest from the polluting project, financial data reveals Barclays and HSBC continue to bankroll the companies constructing the pipeline.

Signed by party co-leaders Caroline Lucas and Jonathan Bartley and four other party members, the Green Party letter calls on Barclays and HSBC to stop funding the U.S. pipeline project due to its impact on the climate and indigenous communities.

Calling the pipeline a “barrier to climate safety,” they write: “The Dakota Access Pipeline is a major fossil fuel infrastructure project, and thus represents exactly the kind of project that should no longer receive the support of those with a serious commitment to tackling the climate crisis.”