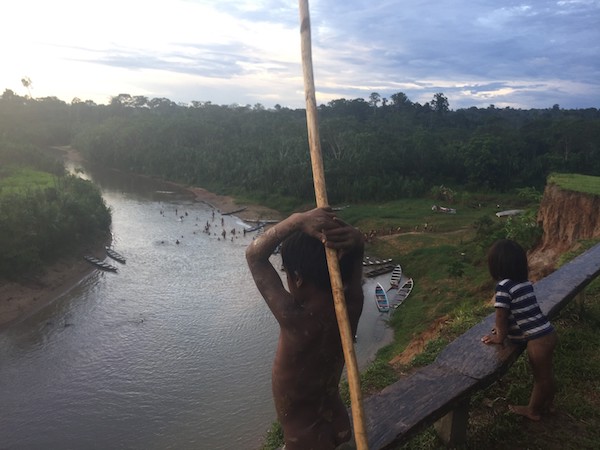 Banisteriopsis caapi vine, the main ingredient in ayahuasca, has long been used for Amazon ethnic groups in religious and medicine ceremonies. In the past few years, the 1,000-strong Yawanawá have found a new purpose for it: to fight deforestation.

“All our medicine comes from the forest. Uni [ayahuasca, in the Yawanawá language] reconnects us with our essence. It is an instrument that controls our way of thinking, of seeing nature”, says Biraci Brasil, chief and spiritual leader of Nova Esperança, reachable only through the small and winding Gregório river, a 6-hour boat trip from the only paved road in this remote part of Acre state.

It was the first time I had drunk ayahuasca. The drug, made famous in the west by writers such as William Burroughs, draws seekers deep into the forest. Those I meet come from the cities of Brazil, as well as the UK, Turkey, the US and Australia. They look for authentic experiences and are willing to pay. In recognition of the link between forest protection and a strong culture and economy, international climate money is now helping the villagers attract more tourists upriver.

Regulars users say ayahuasca feels more special in the forest than within the walls of a temple. While I can’t compare it myself, it was incredible how the cicadas’ buzz grew louder and closer and the trees looked taller and mysterious against the night sky. I even saw a face in a banana leaf bathed by the moonlight. With my eyes closed while laying on the floor, there was a flow of indigenous faces and drawings moving slowly amid bright colours.

I was cautious enough to stop drinking before ayahuasca starts to cause purging, a common reaction. I was done by midnight, but most Yawanawá and Brazilian and foreign visitors kept drinking and dancing to local song until the day rose again.

The traditional use of ayahuasca was interrupted when north American Christian missionaries arrived in the Yawanawá territory during the 1960s. All of a sudden, almost everything they knew was transformed into sin: the language, the naked body, the rituals and the sacred drink.

The Yawanawá have suffered from contact with non-indigenous people since the early 20th century, when rubber barons exploited their communities. “We never earned anything, we only worked. My aunts, my mother and my family were abused because of alcohol,” recalls Ubiraci.

Things began to change in the 1980s. After studying in the city and better understanding how Brazilian society worked, Bira and other Yawanawás leaders obtained demarcation of their lands, expelled the missionaries and the other invaders and began the resumption of ancestral traditions. Sixteen years ago, the village of Nova Esperança created a festival, attended last week by this reporter. Over five days, the Yawanawá perform ancient rituals and plays, including the ritual use of ayahuasca.

Outside influence is now strictly controlled: there is (unstable) internet and generator-produced energy, but churches and non-indigenous music are banned. Alcohol is strictly forbidden, and the single TV set can only be used for football matches.

The festival has become a source of income. Every year, visitors from Brazil and abroad come to the festival at a charge of $920 per person. In other parts of the year, they also accept tourists for weeklong stays.

While at Nova Esperança travellers find surprisingly good infrastructure for such a remote place, with sheltered huts and collective refuges. During the festival, two canteens offer breakfast, lunch and dinner for the visitors.

Much of this, as well as the festival’s expenses for transporting tourists up the river, comes from the German-funded Rem (Redd Early Movers) programme, which is administered by the left-leaning State of Acre government. Although it follows the framework of the results-based Redd+ system, Rem is an international cooperation project, and not a carbon offset scheme.

Acre is one of the most heavily forested states in the Amazon – 87% is still covered by original forest, whereas the Brazilian Amazon as whole has 80% preserved. Home of forest preservation champions such as rubber-tapper leader Chico Mendes and former minister of environment Marina Silva, the state has had notable success backing novel forest protection schemes. 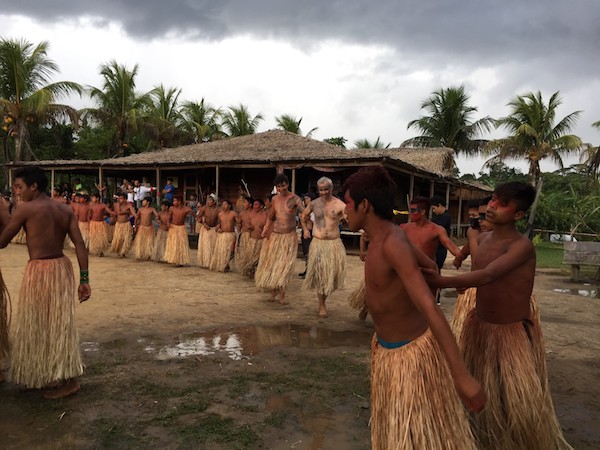 The festival, originally only for villagers, now allows a limited number of outsiders to join, for a fee (Photo: Fabiano Maisonnave)

“Historically, Acre had already pioneered many socio-environmental policies, including in relation to indigenous peoples. In this sense, Acre was the natural candidate, since it had both very good results in reducing deforestation as well as programmes and partnerships that made it possible to make the resources reach different beneficiary groups”, says Christiane Ehringhaus, coordinator of the REDD for Early Movers Program of the KfW Development Bank.

In the first phase, Rem has disbursed €25 million to various project, including the villagers at Nova Esperança. Now the programme will be replenished with another €10m from the German government and about €20m from the UK’s Department for Business, Energy and Industrial Strategy, to be announced on 14 November, during the “Amazon-Bonn Day” at the COP23 UN climate talks in Bonn. KfW will support a similar project with larger, more problematic Mato Grosso state, Brazil’s leading soy producer. Since 2015, Germany also funds a similar programme in Colombia.

In Acre, Rem allocated about €1.3m to projects in 24 indigenous lands, benefiting about 7,000 people, according to the state government.

In the Nova Esperança village, about €24,000 was spent on tourism infrastructure two years ago. In addition, the Yawanawá received €6,600 to buy gas for the boats, Festival Yawá’s highest cost.

Bira hopes that what he calls “spiritual tourism” will help the village to maintain Yawanawá culture and prevent invasion by cattle farmers.

Resisting cattle in Acre is a growing challenge, according to American anthropologist Jeffrey Hoelle, author of of the book “Rainforest Cowboys – The Rise of Ranching and Cattle Culture in Western Amazonia.” Pastoralists have already moved into some nearby protected areas, such as the Chico Mendes Extractive Reserve.

“You could say there is a culture war occurring in Amazonia. It’s not like a material land war with vast areas of forests being burned or the massacre of groups or communities. It’s more of a cultural battle related to the value of nature and how the land will be used. But it is also between rural-urban, local-outsider, small-large producer and production for subsistence vs production for accumulation,” says Hoelle, a professor at the University of California, Santa Barbara.

Across Acre, he says, you cross back and forth on the “fish-barbecue frontier”. As the surrounding land becomes overrun by cattle, traditional fish dishes are replaced by meaty churrasco. Where indigenous culture falls, so does the forest.

“Acre and much of Amazonia have been involved in this culture war since the opening of the region to settlement in the late 1960s and early 1970s. People came to Amazonia for a piece of land and by land they meant that which could be cultivated. The forest was and in many cases still is not seen as economic resource, but as an obstacle to unlocking the economic benefits derived from cattle or agriculture,” he says.

There is strong evidence to back up the efforts to bolster indigenous culture. Whereas the official deforestation rate for the Amazon as whole was 16% less this year, Acre reduced by 34%, ranking third among the nine Amazon states.

The Rio Gregório indigenous land, shared by the Yawanawá and Katukina peoples, lost only 1.11% of its 2,023 km2 of original forest in the same timeframe. All the figures are calculated by the government-sponsored National Institute for Space Research (INPE).

“Here, instead of Catholic or evangelical churches, there is ayahuasca spiritual leadership. Bira is to be congratulated”, indigenous leader Alvaro Tukano, who attended the festival this year. “The best way to preserve the Amazon is through spiritualism, which they draw from the strength of the waters, the ayahuasca and the forest.”