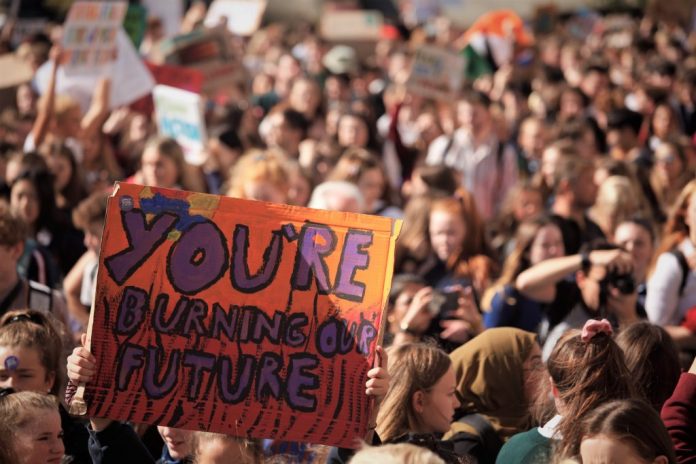 Last Friday marked over six months of continuous weekly climate striking for me.  This week also marked the one year anniversary of my very first climate strike – the March 15th one in Dublin where over 10,000 people marched together in solidarity.

With the looming threat of COVID-19 – another crisis to add to the
long list that afflicts our modern world, and the material impossibility of
striking for the foreseeable future – I thought now would be a good time to
look back at the success I have seen in striking from school.

You may have noticed that my first climate strike and my first
weekly strike were on different days – days separated by nearly six months. When
I first became involved with the climate movement, I will confess that I found
it hard to discern the purpose of weekly striking.

Sitting out in the cold for hours at a time, alone or in very
small groups of people not only didn’t sound appealing to me, but it also
didn’t seem to be particularly effective.
Yes, Greta had achieved a lot, but I heard her speech at COP24 before I
learned of her school strike.  It seemed
to me that there were better places to put my energy than in striking weekly.

However, after attending major strikes – such as March 15th, where thousands upon thousands of people would be jubilantly marching through the streets – I observed something rather interesting and disconcerting.  Although the press lavished massive amounts of attention on these huge strikes, there were plenty of people who were of the opinion that it was nothing more than a ploy to get a day off of school.

It was in fact this criticism that motivated me to finally start
striking weekly.  It is quite easy, in
some ways, to go to a march with thousands of other people for a few hours
every once in a while.  That’s not to say
that the 10,000 people who marched on March 15th or the 20,000 on
September 20th were in it to miss school – but it is considerably
easier to do something when all of your friends are also doing it.

To go and sit in front of a government office for six hours when
your classmates think you are insane to do so, has been quite a bit more difficult,
at least for me. It may seem counterintuitive to respond to the criticism that
that we school strikers “only want to miss school” by missing more
school, but in fact I believe that the regularity, the insistence of being in
the same place, week in and week out has a real power to it.

Over the months that I have been striking weekly, I have seen a
very tangible shift in people’s attitudes. To start with, many people simply
didn’t interact with us, or would only shoot us dirty looks. Those who would
interact generally fell into camps – people who were wholly on-board with the
school strike movement and those who wanted to debate the veracity of the
scientific evidence for climate change or who wanted to tell us to go back to
school.

However, over time there has been a very noticeable shift in
people’s attitudes.  This is a shift that
is visible at all levels of society, but it is especially visible when you are
sitting out on the street for hours every single week.  A lot of the same people pass by every week,
and dirty looks have morphed into questions. “Still here?” is something that I
hear a lot now.

This might seem like a small thing, but ultimately every single
person whose opinion we change – even if it’s only a small change – is a step
towards a better future.  Being able to
interact with your detractor, to debate them and to talk to each other, as
human beings is crucial in implementing change.
We can’t continue to act like everyone who disagrees with us is crazy –
we need to bring people on board, and weekly striking, in my experience, has
been a powerful tool in doing so.

The bottom line is that the fight for climate action is going to
require persistence and determination from everyone. We are in this for long
haul. As Greta has said, every single percentage of a degree matters, and we
need to keep fighting, day in and day out.

Striking every week has not only changed other people’s opinions, it’s also changed mine, and it’s given me strength to keep going that I might not have otherwise.  The regularity, the rhythm of it, the feeling of doing something – no matter how small, is truly, truly powerful.

Theo is a school striker and climate activist from Clare Island in Co Mayo. He is a founding member of School Strikes 4 Climate Ireland, and has addressed Dail members on several occasions, as well as addressing attendees at COP25 in Madrid alongside Mary Robinson.

The post Climate strikes – ‘the strength to keep fighting on’ appeared first on Green News Ireland.

Japan sticks to 2030 climate goals, accused of a ‘disappointing’ lack of ambition