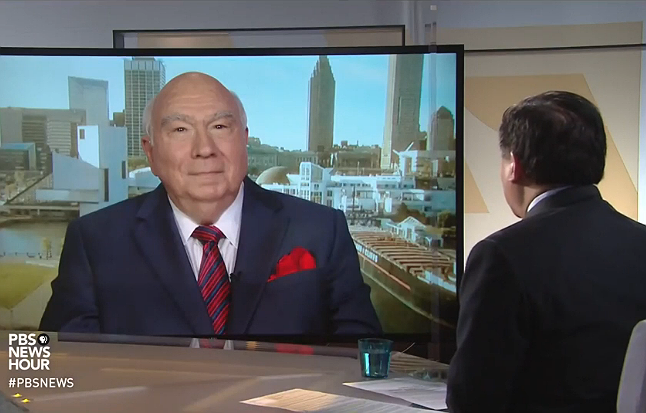 The Trump administration avoided making any statement on the science of global warming as it moved to revoke the Clean Power Plan, but one of its most influential coal-industry allies made clear he is pushing outright rejection of the scientific consensus.

“We do not have a climate change problem,” Murray Energy Chairman and CEO Robert Murray said Tuesday on PBS Newshour as he lauded the repeal decision. He asserted that “4,000 scientists” had told him that “mankind is not affecting climate change.”

This is a level of denial that even the most ardent opponents of climate action in the Trump administration rarely speak out loud, and it flies in the face of the scientific consensus.

But Murray, who is head of the nation’s largest privately held coal company, adamantly propounded some of the most common, and thoroughly debunked, talking points of the denialist camp.

“The Earth has cooled for the last 19 years,” he said—an utter falsehood.

Murray dismissed all evidence to the contrary as “a natural cycle,” not the result of a buildup of carbon dioxide in the atmosphere, mostly from the combustion of fossil fuels, which scientists say is the principal cause.

Murray said he has counseled President Trump to go further than reversing the power plant rule that is the Obama administration’s signature climate change policy; he has also urged repeal of the 2009 finding that greenhouse gases endangered public health and welfare. That finding, grounded in peer-reviewed science, is the underpinning of the Environmental Protection Agency’s actions on climate change under the Clean Air Act.

“My stand is that the endangerment finding needs to be repealed, that carbon dioxide is not a pollutant,” he said.

Although Murray has made similar statements in the past, his latest refutation is more detailed, and comes at a time when his position to influence policy has become increasingly apparent. Last week, President Donald Trump nominated Murray Energy lobbyist Andrew Wheeler to be deputy administrator of the EPA. Wheeler, who is also a former aide to hard-core climate denier Sen. James Inhofe (R-Okla.), must be confirmed by the Senate for the post as No. 2 to EPA Administrator Scott Pruitt. Hearings have not yet been scheduled.

Pruitt, like many in the Trump administration, has stopped short of outright denial of climate change. In his rationale for repealing the Clean Power Plan, he did not discuss science but focused on EPA’s authority under the Clean Air Act and its method of cost-benefit analysis.

Hard-line opponents of federal climate policy, like Murray, have argued that that effort will be on shaky legal ground unless the Trump administration rejects the finding that carbon dioxide causes harm. This puts them at odds with a number of industry groups, including other fossil fuel companies, which have urged a more cautious policy—continued engagement in the Paris climate agreement and replacement of the Clean Power Plan with a more narrow set of regulations.

Murray, who supported Trump’s decision to pull the U.S. out of  the Paris accord, made clear his advice to the administration now is to dismiss mainstream assessments of climate science as a hoax.

Murray has bet heavily on the future of coal through a series of acquisitions over the past decade. With a dozen mines in six states, the company says it has capacity to produce 65 million tons of coal per year, and says it owns three billion “salable” tons of reserves.

Murray has worked assiduously for years to head off federal climate regulation. In fact, emails obtained by the Center for Media and Democracy showed that Murray conferred with then-Oklahoma Attorney General Pruitt in 2015 after the Obama EPA announced its plans for reducing carbon emissions from the electric power sector. Inhofe acted as a go-between, arranging a phone meeting between the two.

Murray Energy is a leading plaintiff in the ongoing litigation over the Clean Power Plan.

Murray was an enthusiastic supporter of Trump during last year’s presidential campaign; at a time when many fossil fuel executives held off on supporting his campaign, Murray hosted a fundraiser for him in Charleston, West Virginia, weeks before the Republican convention that netted at least $580,000 in donations. Murray also was one of the top donors to Trump’s record-breaking inaugural fund, with a $300,000 contribution.