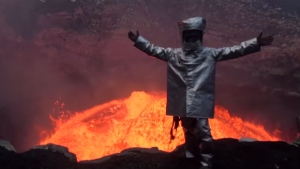 George Kourounis stood on the precipice of a spitting lake of fire before rappelling down into the depths of the fiery inferno.

The Darvaza Crater in Turkmenistan, known as the ‘Door to Hell,’ was created when a natural gas field collapsed into an underground cavern, creating a massive burning crater that has been burning for more than 40 years.

While the hellish landmark has sparked the curiosity of explorers for decades, Kourounis became the first to actually step in.

‘Only one person has been down there’

“In the desert, there is this 100-foot deep, 230-foot wide, flaming pit of fire that used to be a natural gas drilling rig, that collapsed, and was leaking natural gas,” said Kourounis, host and producer of the television series Angry Planet.

He is in Edmonton for a free lecture Wednesday night at the University of Alberta.

“They lit it on fire thinking it would burn off in a couple of days, and it’s been burning since 1971.

“Twelve people have been on the surface of the moon but only one person has been down there.”

Whether inside the eye of a hurricane, wandering across a blinding Arctic tundra or teetering on the edge of a spewing volcano, Kourounis, a storm-chaser and renowned adventurer, has found himself face-to-face with some of the most furious forces of nature.

“I have a hard time describing what I do and I’m pretty sure my parents don’t even understand what is is I do. I barely do,” Kourounis said in an interview with CBC Radio’s Edmonton AM.

‘Pulling out all the stops’

In his lecture series, On the Front Lines of an Angry Planet, Kourounis presents audiences with images from some of his most awe-inspiring adventures documenting extreme weather events and natural disasters around the world.

“I’m pulling out all the stops, all the most dramatic video, the craziest stories from all of my adventures all around the world,” he said.

“I want to make sure that people are as entertained as they are educated.”

From battering winter storms in the highlands of Cape Breton to smoking lava lakes in the heart of the Ethiopian desert, he’s been at the front lines of climate change. He wants to give people a more visceral picture of the environmental impacts.

People need to know that changes in climate aren’t just happening in far flung, exotic places but in every region around the world, including Alberta, said Kourounis.

“Edmonton is uniquely positioned in the middle north part of the continent, where you get these hot summers and these cold winters,” Kourounis said.

“You get a lot of extremes here, and what we’re expecting to see is more of the extreme ends of spectrum as we move forward — more floods, more droughts, more heat waves — and you will feel that here.”

‘I was so passionate about it’

Kourounis, originally from Hull, Que., wasn’t always a globetrotter or a climate-change activist.

He started his career as an audio engineer in recording studios.

While sound was his trade, travelling was always his passion. He would work endless hours of overtime so he could take wild vacations around the world.

“It was one of those things where I was so passionate about it that I would negotiate more time off, and take all of my overtime to travel,” said Kourounis.

“And I would take that time chasing tornadoes, or going to hurricanes like Katrina, or going to Ethiopia to rappel down an active volcano.”

That was more than 20 years ago.

Since then, he has been to 65 countries on all seven continents and made Angry Planet, the series he helped bring to audiences in 2007.

“It just snowballed from there. I just developed this reputation, and the next thing you know I got my own TV show and I’m travelling the world.

Listen to Edmonton AM with host Mark Connolly, weekday mornings at CBC Radio One, 93.9 FM in Edmonton. Follow the morning crew on Twitter @EdmAMCBC.