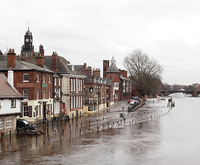 The hydrological cycle is predicted to strengthen with global warming, increasing the amount and intensity of precipitation and therefore the chances of flooding from large world rivers. As almost one billion people reside in floodplains, this hydrological intensification puts an ever-increasing population under the threat.

The authors reveal that flood frequency (and therefore flood risk) increases under all scenarios, but that impacts are positively dependent on the magnitude of anthropogenic warming. For example, countries representing three-quarters of the global gross domestic product exhibit a 120% increase in flood damage associated with the 1.5 °C scenario, which increases to 170% and 500% at 2 °C and 4 °C, respectively. Projected changes are spatially heterogeneous, being largest over Asia, America, and Europe. These results highlight the need to take active mitigation measures to limit global warming and thus global flood risk.