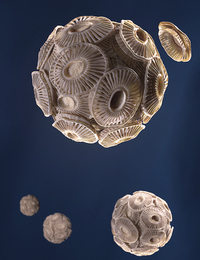 Ocean acidification has been shown to have different effects on different phytoplankton species. Studies on the effects often consider the differences between species but, as intra-species differences may exist, a question remains: does a single genotype study provide a representative response for a species?

Giannina Hattich, Luisa Listmann and colleagues at GEOMAR Helmholtz Centre for Ocean Research Kiel, Germany, investigate the effects of ocean acidification on different genotypes of three phytoplankton species, sampled in one geographic region — Gran Canaria in the Atlantic Ocean. For each species (two coccolithophore and one diatom species) they study the growth rates of nine different genotypes, individually and as a mix, under ambient and high CO2 conditions, without acclimation, to see inter-species and intra-species plasticity (ability to tolerate changed conditions).

Overall each phytoplankton species showed little response difference between the two CO2 conditions. However, within species there were growth rate differences, with the largest variance seen for the diatom. For the coccolithophores the mix sample response was not significantly different from the average across the individual genotypes, although this was not true for the diatom. These findings highlight that genotype-mix samples may be more appropriate to determine species responses to environmental change. BW