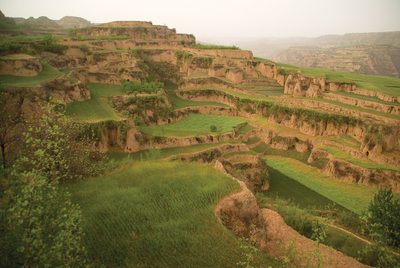 Like clockwork, summer monsoon rains come and go, governing and impacting the lives of more than 100 million people living on the Chinese Loess Plateau (pictured). This fertile region, with its intrinsic ties to seasonal weather change, has played a key role in the evolution of Chinese civilization for millennia. The seasonal rains cause episodes of wholesale erosion that affect the health of freshwater ecosystems downstream. Understanding such climate processes, and how they might be affected by future change, is paramount to the socioeconomic health of this region. Writing in Nature Climate Change, Jianbao Liu and co-authors report on changes associated with well-known warming events occurring over the past 2,000 years and compare those to markedly different ecological changes now occurring due to anthropogenic aerosols1.

The impact of aerosols on climate has been a topic of much discussion over the years. Aerosols scatter light, and act as seeds (condensation nuclei) for cloud formation. The irregular distribution of aerosols can cause large and variable regional impacts. While aerosols and their relationship to radiative forcing are increasingly better understood, they are still one of the largest contributors to uncertainty in future climate projections2.

Ever-increasing air pollution and anthropogenic aerosols from developing Asian countries are reducing radiative forcing, leading to a reduced land–sea temperature contrast and diminished wind fields. This increase in anthropogenic aerosols over the past half century has weakened the Asian summer monsoon system3,4, as the monsoon is essentially a seasonal reversal of strong winds governed by changes in the land–sea temperature contrast. Rainfall associated with the monsoon typically causes massive erosion and mobilizes large amounts of nutrients in the form of phosphate from the soil. This nutrient-laden runoff fertilizes both fresh water and marine ecosystems, increasing biological productivity. This lowers oxygen levels in these systems and reduces water quality for consumption. Additionally, the associated strong seasonal winds affect vertical mixing of lake waters. Thus, in terms of freshwater quality for much of Asia, the weakened monsoon may be beneficial.

To gain insight into the effects that warm periods and associated changes in monsoon strength have on freshwater ecosystems, Liu et al. investigated sediment records from Lake Gonghai on the Chinese Loess Plateau1. By monitoring changes in diatom assemblages, they found that during two pronounced intervals of historical warming, the Medieval Warm Period ad 931–1320 and the Sui-Tang Warm Period ad 541–760, increases in monsoon rainfall delivered greater amounts of nutrients to the lake. The composition of diatom assemblages in the lake during both warming events indicates shifts toward eutrophic (excess nutrient) conditions.

During the last half century, while the region has experienced warming, the monsoon system has weakened due to increased atmospheric loading of particles, resulting in lower precipitation and runoff. This shows up in the lake sediment record as a turnover to a very different diatom assemblage, one with taxa indicative of more oligotrophic (low nutrient) and thermally stratified (reduced vertical mixing) lake conditions. This assemblage is different to any observed in the previous 2,000 years of lake sediment accumulation studied by Liu et al. The observed decrease in the monsoon and associated precipitation in the current warm period is counter to that in the historical record.

It is overly simplistic to think that global warming causes latitudinal shifts in environments and associated ecological systems. These results document that climate change can have complex impacts on ecosystems, shifting those systems into new configurations not previously observed in the historical record. This means we cannot always look to the past as an analogue of what the future may hold as the climate warms. Instead, the palaeoclimate record can inform us about the processes of climate change.

The findings of Liu et al. pose the possibility that remediation efforts aimed at decreasing anthropogenic aerosols could have a negative impact on the health of freshwater ecosystems. Their research illustrates that there are hidden impacts associated with our changing climate and mitigation efforts — impacts that should be understood through sound scientific inquiry before informed policy decisions can be made.