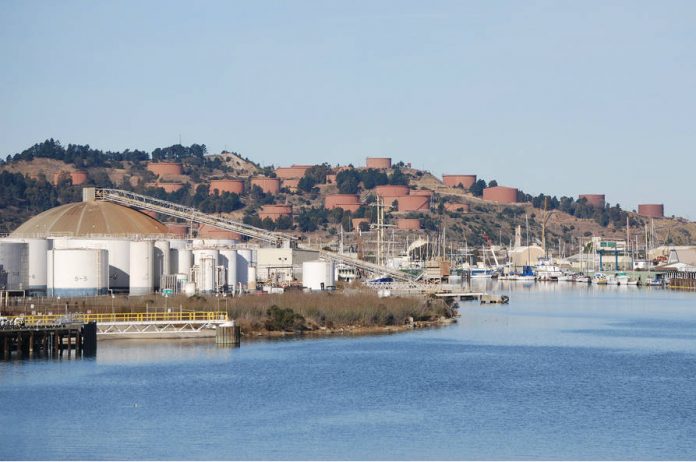 A new analysis concludes what many in African-American communities have long experienced: Low-income, black Americans are disproportionately exposed to toxic air pollution from the fossil fuel industry.

More than 1 million African Americans live within a half-mile of oil and natural gas wells, processing, transmission and storage facilities (not including oil refineries), and 6.7 million live in counties with refineries, potentially exposing them to an elevated risk of cancer due to toxic air emissions, according to the study.

When the authors looked at proximity to refineries, they found that about 40 percent of all people living in counties with refineries in Michigan, Louisiana and Pennsylvania are African American, and 54 percent in Tennessee are.

In three other states—Oklahoma, Ohio and West Virginia—they found that about one in five African-American residents statewide lives within a half-mile of an oil or gas facility.

“We have a real problem with air,” said Doris Browne, president of the National Medical Association, a national organization of black physicians and sponsor of the study. “We think it’s just a little smog and fog, but we need to worry about the pollutants in the air we’re breathing.”

The study, Fumes Across the Fence-Line: The Health Impacts of Air Pollution from Oil and Gas Facilities on African American Communities, was published Tuesday by the Clean Air Task Force and the National Association for the Advancement of Colored People.

Its findings are based on data from the U.S. EPA’s National Emissions Inventory and the National Air Toxics Assessment, which look at emissions and health risks on a county-by-county level. The authors applied additional analysis to focus solely on emissions and health impacts attributable to pollution from oil and gas facilities, and then used demographic data to estimate health impacts on African-American communities.

The exposure carries extra health risks, the study says. Among African-American children, the study connects emissions from oil and gas facilities to over 138,000 asthma attacks and over 100,000 missed school days each year. (Approximately 13.4 percent of African-American children nationwide have asthma, compared to 7.3 percent for white children.)

An Issue of Environmental Justice

The exposure to pollutants is tied to deeper systemic issues of oppression and poverty, said Marcus Franklin, program specialist on environmental and climate justice for the NAACP and co-author of the report.

Nationally, the study found, African Americans are 75 percent more likely than Caucasians to live in “fence-line” communities—those next to commercial facilities whose noise, odor, traffic or emissions directly affect the population.

Franklin said communities need more choice and control over their energy sources, and a shift away from fossil fuels.

“It is time to shape an energy future that is not exploitative and does not profit from acts of environmental racism,” he said.

The Obama administration initiated more stringent regulations of oil and gas facilities designed to safeguard surrounding communities—one set of regulations would cover methane and smog forming pollutants from new and modified sources; another would cover oil and gas facilities on public land—but the Trump administration is now attempting to cancel the additional protections.

Browne said the report underscores why the Trump administration’s plans to roll back environmental protection are especially concerning for African-American communities. “We have a fight on our hands,” she said.

Robert Bullard, a professor of urban planning and environmental policy and administration of justice at Texas Southern University who wasn’t involved in the study, agreed.

Frank Maisano, a spokesman for Bracewell LLP, which represents oil refiners and oil and gas developers, questioned the study’s conclusion that expansion of the natural gas supply chain was disproportionately affecting African-American communities. Much of the development in places like Pennsylvania and West Texas has occurred in rural communities with low minority populations, and low populations overall, he said.

The American Petroleum Institute says methane emissions from the natural gas industry have fallen 18.6 percent even as production increased 50 percent between 1990 and 2015.

“The fracking boom has taken place in rural white areas, for the most part,” said Lesley Fleischman, an analyst with Clean Air Task Force and a co-author of the study. “That doesn’t negate the fact that there are still 1 million African Americans at risk in proximity to existing infrastructure, in places like Texas, Louisiana and California.”

‘You Know You’re Being Harmed’

One community highlighted in the report is West Port Arthur, Texas, which is 95 percent African-American and surrounded by several petrochemical plants, including one of the largest oil refineries in the world, owned by Texas-based Valero.

According to the EPA’s Toxics Release Inventory, Jefferson County, which includes Port Arthur, is ranked one of the worst counties nationally for chemical emissions known to cause cancer, birth defects and reproductive disorders.

“If you look up into the sky you constantly see smoke stacks spewing brown smoke or whitish smoke into the air,” said Hilton Kelley, executive director of Community In-Power & Development Association in Port Arthur. “It’s a very ominous kind of view. You know you’re being harmed.”