Home Science Mitigation Why Greece has been slow to embrace clean energy.

A view of the newly-erected wind turbine on Tilos, Greece, part of a microgrid that, along with a solar park and a renewable battery system, will power the island. Joanna Kakissis/NPR hide caption

The sea winds of Greece are legendary.

The strong, dry north Etesian winds, also known as the meltemia, blow on the Aegean Sea from May to September.

Then there are the fierce main winds, which blew mighty waves towards Odysseus in Homer’s Odyssey. “Then were the knees of Odysseus loosened and his heart melted, and deeply moved he spoke to his own mighty spirit: ‘Ah me, wretched that I am! What is to befall me at the last?'”

Odysseus may have seen the winds as a curse. But on the island of Tilos, they’re a blessing.

In a little over a month, Tilos is set to become the first island in the Mediterranean powered solely by wind and sun.

The remote Aegean island, with a population of 400 year-round that swells to 800 in the summer, is near the coast of Turkey. The port looks like a postcard with whitewashed houses, bright-pink bougainvillea and sage-covered hills in the distance.

Tilos Mayor Maria Kamma sits outside a seaside cafe. “We wanted to evolve from simply a green island into a clean-energy island,” she says. “We wanted to do something substantive.” Joanna Kakissis/NPR hide caption

Mayor Maria Kamma is waiting at a cafe on the tree-lined promenade. Over beers and roasted goat, she explains that the island has scaled its tourism to be sustainable.

“We have built our tourism offerings to scale,” she says. “Small inns that don’t use much water, for example. Every year, we see it raining less and less here, and we don’t want to waste what we don’t have.”

The island is also a nature reserve, with more than 650 plant varieties, a nesting ground for partridges and eagles. Kamma says the 13,000 tourists who come here annually like its sustainable vibe.

“An increasing number of tourists come here every year for this reason,” she says. “So we wanted to evolve from simply a green island into a clean-energy island. We wanted to do something substantive.”

She reached out to engineers at the Technological Educational Institute (TEI) of Piraeus, who designed a small solar park, wind turbine and battery storage system.

“We developed a solution tailored to the needs of the island,” says Dimitris Zafirakis, a mechanical engineer at TEI Piraeus who led work on the project. “We didn’t want to oversize it — so the community wouldn’t feel overwhelmed. We also wanted to figure in variability on those very few days the sun doesn’t shine or the wind doesn’t blow. That’s why we store energy in a battery, so Tilos will have energy at all time.”

The $16 million project is funded largely by the European Union, with help from the Eunice Energy Group, a Greek renewable energy developer.

Standing next to the wind turbine, which workers have just finished installing, Tilos municipal advisor Stathis Kontos looks over a deep blue bay.

Stathis Kontos, who works for the Tilos municipality, talks to two tourists about the clean energy project after they spot the wind turbine in the distance. Joanna Kakissis/NPR hide caption

“That’s the island of Kos in the distance,” he says. “In the water below is a cable that gets us electricity from a diesel plant on the island. Greece imports diesel. We don’t want to use this cable anymore.”

Kontos moved here a couple of years ago because he admired that the island saw the ever-present Greek sun and wind as gifts.

A big step for Tilos, a small step for Greece

Back in Athens, not everyone is optimistic.

“Tilos is a good example to acquaint people with the power of renewables,” says Yiannis Tsipouridis, a wind-energy advocate and the former head of renewables for Greece’s electricity company, the Public Power Corporation. “But it’s a small island, small needs. It will just cover the local needs.”

“The first wind park in Europe was installed in Greece in 1982,” he says. “We started fantastically. But we have never had a long-term energy plan. We have had efforts by only a few leaders.”

Renewables now supply 20 percent of the country’s electricity, largely because of a push by former Prime Minister George Papandreou, a strong advocate of renewable energy. But that percentage is less than what it is in Germany — a cloudier country.

Tsipouridis is frustrated by Greece’s history of dependence on lignite coal.

“We’re one of the few countries that’s constructing new lignite stations,” he says. “Totally wrong. You have to persuade the political system that [solar and wind power] is treasure to utilize. You can’t do that because we have lignite, which they think is God’s gift.”

Giorgos Adamidis is one of the people in the political system who has lobbied hard for lignite. He runs the union representing workers at the Public Power Corporation.

“I believe there is some human involvement in climate change but there’s no way it’s so high that it will destroy the planet,” says Adamidis, who worked in coal plants. “I can’t imagine that, and scientists haven’t proved it, in my opinion.”

The union applauded when President Donald Trump withdrew from the Paris Climate Accords. Though Adamidis says he cringes at Trump’s description of climate change as a “Chinese hoax,” he believes the financial interests of renewable-energy companies are pushing climate-change fears.

“So why shouldn’t we push our own interests?” he says. “Lignite is ours! Lignite is our own fuel, we have to utilize it, defend it, and not shut down the plants.

Lignite coal has created thousands of jobs at mines and power plants in the northern Greek province of Western Macedonia.

Kozani Mayor Lefteris Ioannidis stands in front of the Agios Dimitrios coal plant, one of the most polluting in Europe. A longtime environmentalists, he’s trying to convince the Greek government to retrain coal workers for jobs in the renewable industry, like assembling wind turbines or solar panels. Joanna Kakissis/NPR hide caption

“Lignite helped develop Greece after World War II,” says Lefteris Ioannidis, mayor of the municipality of Kozani, the epicenter of coal country. “It was cheap, accessible fuel that helped everybody here get jobs with good salaries. And this region, all of Greece, really, got addicted to it. It’s been hard to change that.”

We meet at the village of Agios Dimitrios, next to one of the largest and most polluting coal-fired plants in Europe.

Workers in protective suits stand next to a conveyor belt carrying coal. Fumes pour out of smokestacks. The air is hot and heavy.

Right behind the coal plant are solar panels. “Those are private, put up by some farmers upset that the coal plant is using up so much of the area’s water,” Ioannidis says. “I always say coal is our past, and renewables are our future.”

Unlike many here, Ioannidis never worked in coal. A member of Greece’s Ecologist Greens party, he believes lignite has destroyed the environment here.

“We’ve moved entire villages because the land, water, air are too polluted,” he says.

The municipality of Kozani has several lignite coal plants. Lignite helped develop Greece after World War II but, as it runs out, it’s quickly being displaced by imported diesel and natural gas. Joanna Kakissis/NPR hide caption

At a cafe run by a retired coal-miner, Ioannidis strikes up a conversation with 57-year-old Dimitris Tsavdaridis, who started working at the plant in his teens and just retired. Tsavdaridis lived in one of the evacuated villages.

“We had a lot of problems with cancer, with respiratory diseases,” he says.

Tsavdaridis says he also believes burning lignite has contributed to climate change. Each year, the heat waves get more unbearable, he says. Farmland in Crete is becoming desert. A lack of rain has fueled catastrophic forest fires.

But people here need jobs. The unemployment rate in the Kozani area is 30 percent.

Ioannidis says that if people here are retrained to work in renewable energy, they will back it.

“They know Greece’s future is in renewable energy,” he says. “We’ve already approached the government about training people to build wind turbines and solar panels here.”

About a third of Greece’s energy production now comes from lignite. It’s going down because lignite is set to run out in about 30 years. Greece is now importing diesel, transporting it to power the Aegean islands.

“Systems such as the Tilos project can reduce electricity bills as well as protect public health,” Mantzaris says. “But renewables have become a threat. As a result of pressure from the oil and lignite lobbies, Greek governments have tried to stall progress in renewables in order to leave electrical space for lignite in the mainland and oil on the islands.”

“Really I hate myself when I say that, but I have to say it: Do you think if Greece was inhabited by Germans, God forbid, that the Aegean would have diesel stations?” he says.

Tsipouridis has tried for years to sell wind parks to islanders. He’s made some inroads, but not enough to call wind energy a success in Greece.

He says many islanders are wary of wind parks — and some not just for the usual reasons, like birds dying or turbines spoiling views.

He’s heard weird excuses: Wind turbines cause miscarriages, they chase away clouds so it won’t rain.

And he will never forget one Greek farmer’s insistence that they changed the sexual orientation of his goats.

“My goats have turned gay,” Tsipouridis says, smiling and shaking his head. “He said it.”

Legacy of a visionary mayor

Tilos is okay with that. If this remote island outpost is forward-thinking, much of the credit goes to a pioneering mayor named Tasos Aliferis.

He arrived here in the 1980s as a young doctor doing his required five-year rural service. He fell in love with the island and told the villagers, many of whom wanted to flee to Athens, that they lived in paradise.

Aliferis banned hunting here in 1993 and turned the sage-covered hills into a nature reserve.

In 2008, he officiated at the first gay wedding in Greece.

Stricken with cancer the next year, he helped launch this clean energy plan. As he lay dying in 2012, he told his son, Spiros Aliferis, to help carry it out.

“He told me that, whatever barrier that’s in our way, we have to make it happen,” says Spiros Aliferis, walking along the tree-lined promenade named after his father. “We got the entire island involved in it.” 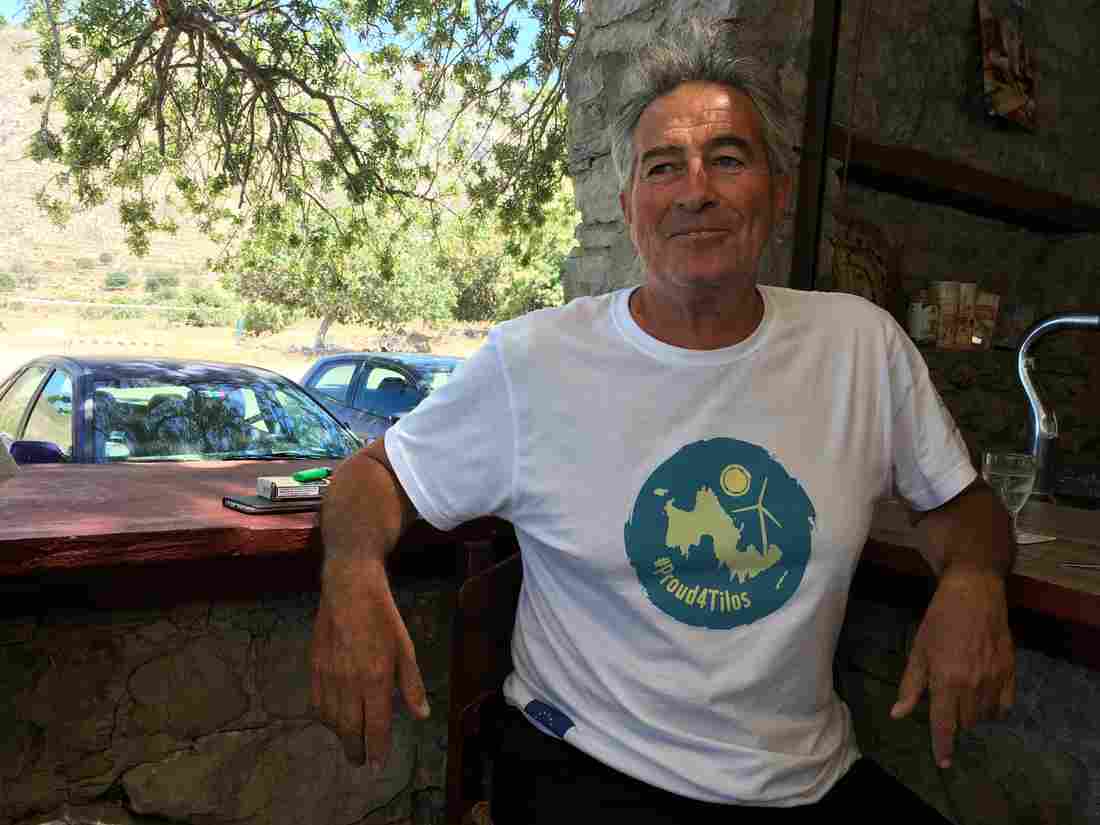 Tilos deputy mayor Andreas Fillipou, 56, is among many islanders sporting a #Proud4Tilos T-shirt to celebrate the tiny Aegean island’s move to only use renewable energy. Joanna Kakissis/NPR hide caption

The islanders proudly sport #Proud4Tilos T-shirts. A Syrian father, among the 45 refugees that the island is housing and training for jobs, even helped clear the road for the wind turbine.

The Tilos project has already won awards from the EU, but Mayor Maria Kamma says she’d like to do more, like bring in electric cars with charging stations.

“We are a tiny island in a small country,” she says. “We know that climate change is bigger than us. But we will do whatever we can to keep our paradise going a little while longer.”